Cosplay As A Lifestyle

Cosplaying is a big business. Since its inception in the late 1970s, the fad of dressing up as fictional characters – mostly from video games or Japanese anime – has blossomed from odd hobby to billion dollar enterprise. Prominent cosplayers are featured on magazines and blogs constantly, and a few manage to make a living out of it. We caught up with one of the lucky ones – a woman known only as Heather AKA HezaChan – and asked her about cosplay, her newfound fame, and the difference between cosplay and performance art. 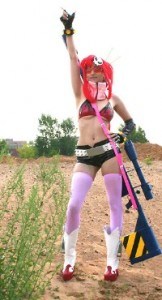 HezaChan is one of the most well-known Cosplayers in the anime circuit. Starting as just a hobby, she has now turned it into a career and lifestyle.

JW: What attracted you to the cosplay lifestyle?

HezaChan: To be honest with you I had no idea what cosplay was when I started. Ever since middle school I loved anime, and once I got into high school my friend Valerie told me about this convention for Japanese animation. I had no idea that people dressed up, or that it had a name, all I knew at the time was if people go to Star Trek conventions dressed up as characters, they must do it at anime conventions too. So I had my mom help me with my first costume and I was hooked ever since.

JW: Did you ever play dress-up or go around in costume prior to participating in cosplay?

HezaChan: Actually no. I never was a very girly girl, and in fact I loved to play with Spawn action figures and G.I. Joes with my friend Cody. The only time I would dress up would be for Halloween.

JW: What about friends and family? Have they ever engaged in any costume/cosplay events?

JW: What are some of the more popular characters you’ve dressed up as?

HezaChan: I’m not one who regularly cosplays popular characters, but I’d say the ones that are the most recognized would be Felicia from Darkstalkers

, and Yoko from Tengen-Toppa Gurren Lagann

JW: How is cosplay and performance art similar? How is it different? Is there a difference? 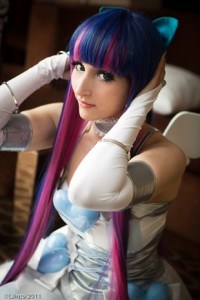 HezaChan does all of her own makeup, does her own hair, and even creates her own costumes.

HezaChan: I’d say it’s similar due to rehearsals, costume, makeup, and writing a script for your performance. There is a lot of time that goes into everything for the skit to be finished and ready for your audience. I would also say that the main difference between the two is that most cosplayers do mostly everything themselves, (from writing the script, to making the costume, to doing their own makeup) while performers usually have people who make their costumes, do their makeup and write the script they act from.

JW: Some have been critical of the cosplay lifestyle for engendering unrealistic expectations (e.g. women portraying large breasted characters, men portraying unusually buff ones). How do you respond?

HezaChan: I have noticed that a lot more cosplayers are pretty strict in this area for some reason. I have never bound my chest to portray a smaller chested character. It’s painful for me. I will, however, wear a sports bra or something of the like so they aren’t as pronounced. I seem to always love to cosplay the cutesy characters, and they almost always have a much smaller build than compared to my body type. I say if you look like your character (body and face wise), more power to you, but I don’t see it as a requirement. Cosplay is about promoting a character/series that you love, so cosplay what you like regardless.

JW: In recent years, there have been a rash of incidents where overzealous fans have accosted and even harassed cosplayers, especially females. Has this created a gulf between cosplayers and their fans?

HezaChan: I wouldn’t say so. You can’t blame the whole bunch for one bad apple. However, I do think that cosplayers are more cautious towards fans though.

JW: Cosplaying is also expensive – many of the suits and dresses contain embellishments and are tailor made. Do you fear this interferes with the average individual’s’ ability to participate?

HezaChan: Cosplaying is an expensive hobby, but there are ways around having to pay tons to get the right look. I, by no means, am rich. I have always tried to buy fabric when it’s on sale. Use those coupons that come in the mail, they come in handy! Craft foam is a cheap alternative to making armor instead of expensive sheet metal. It’s lighter, and you can get lots of different effects with paint. It also depends on how accurate to the character you wish your costume to be. I’d say for beginners who don’t have a lot of money that still want to cosplay is to pick a character you like with a relatively simple design and go from there.

JW: The lifestyle has received a lot of attention from the mainstream media as of late – articles have been splashed on the life section of print newspapers and in the blogosphere. Do you believe this will lead to a watering down of the subculture?

HezaChan: Although some articles have been negative towards the subculture while others are positive, I think the attention will bring more fans and cosplayers to conventions.

JW: How do you feel about getting recognized as a cosplayer?

HezaChan: I feel that being recognized for my work makes me feel like what I am doing is worth it, even though I’d probably keep cosplaying regardless.

JW: Did you imagine you would receive as much attention as you have for your hobby?

HezaChan: No, not at all!

JW: How does your family feel about your newfound ‘fame’?

HezaChan: My mother, father and grandma are proud of the work I do. My grandma always asks me about what costume I’m working on next. I remember when I made it on TV for G4 my family was excited for me and when I had come home with some magazines I was in years back they were happy for me then too. They have always been supportive of my passions and hobbies, and I’m so lucky to have them in my life.

JW: Do you have any other hobbies or interests besides cosplaying?

JW: What advice would you give to someone starting out in cosplaying?

HezaChan: Read books on sewing, and start off simple. Don’t try to tackle a HUGE project right off the bat, it may become overwhelming and you might want to give up. If something seems too hard at the moment, take a break and go back to it later. Also ask questions to people you may know that sew. Take a class, or just teach yourself. Whatever it is, don’t give up. It takes years and years of practice and lots and lots of patience.

JW: If you had it to do it all over again, would you still be a cosplayer?

HezaChan: Oh yes! I haven’t had anything as fulfilling in my life as cosplaying. You learn new skills that can be applied in the workplace, you meet new friends with similar interests, and you may also meet people who can help you with your carrier choices. It opens doors for you, and it’s extremely fun.

JW: Thanks for your time. Do you have anything else you want to get off your chest while we’re at it?

HezaChan: If at first you don’t succeed, try, try again.

Get tips on Cosplay & Follow HezaChan by clicking around below! 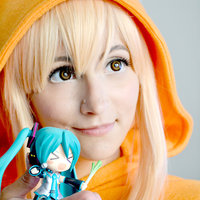