Hello, this is Jean Marie Ward for BuzzyMag.com. With me tonight is bestselling author Mercedes Lackey and writer and artist Larry Dixon. Welcome.

Larry Dixon: Good to be here.

JMW: Having been to your panel on Saturday night, I got to ask you. What is a Metahuman and how the heck did you guys get involved with them?

Mercedes Lackey: Well, a Metahuman is a super human or a Super Hero, but DC Comics has the trademark on Super Hero so we had to call them something else.

Mercedes Lackey: They did. They’re not heavily enforcing that but we just didn’t want to get into any problems before things started, so we called them ‘Metahuman’ which is something beyond human.

JMW: And this is something for a project called The Secret World Chronicles that you do as a podcast as well as a novel.

Mercedes Lackey: It started out as a podcast. Actually before that, it started out with a bunch of us doing role playing our Metahuman characters, which are called heroes, in the MMORPG City of Heroes, which we still play and still adore. We created such compelling characters that we decided we’d try and take the them a little farther and eventually we created our own setting, took those characters, and some of them have changed substantially from what they were when we played them.

Some of them have remained the same. So I’m kind of somewhere in the middle. And we started putting together a big long story art for them. And I wanted to do this as a series of novels. But since I’m known for fantasy, writing Super Hero fiction is kind of a hard sell. So instead we did podcasts, made them free, in order to build an audience so that we could take this to a publisher and say, “See, we actually have a built in audience.” And as of today we’ve had over 2 million downloads.

Mostly what happens now is that we are adding material between the time that we do the podcast and the time we finish the book. So the books generally have a little bit more then whatever’s in the podcast. The podcast will also have material that for one reason or another doesn’t fit into the book. Right now we’re on what we call fifth season.

The podcast we break up into seasons and we’re on fifth season which is kind of some intermediate material that could have been in the books but there’s no real place for it, but will be very interesting to the fans.

Mercedes Lackey: Yes, especially we’ve got some of John Murdock’s back story coming up.

JMW: And is it a spoiler to say what happened to him?

Larry Dixon: It’s the end of the beginning of the middle of the… oh, sorry.

Mercedes Lackey: You’re a very silly man. And it takes place when he’s sort of killing some time in a motel room and something that Vicky says to him in her overwatch role makes him do a flashback to when he first escaped from the project.

JMW: And do you each write primarily the adventures of the character that you play in City of Heroes. So can you give us your characters and who they are? Larry.

Rest Of Interviews On Videos 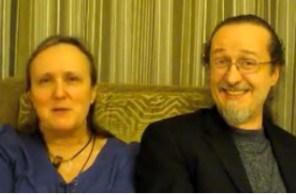