The third of the Mercy Thompson series perfectly balances the love triangle between werewolves with Mercy’s latest mission of proving her mentor’s innocence in a high-profile murder. 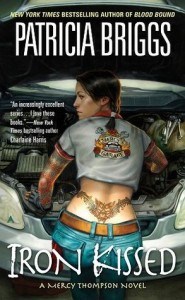 Iron Kissed picks up with Mercy in #1. a love triangle and #2. a quest to disprove that her friend was responsible for a politician’s death.

While the Mercy Thompson series has matured over the past three years, with “Iron Kissed

“, author Patricia Briggs proves that the paranormal action-fantasy still has heart – not to mention guts. And though the third book in the series finds Mercy coming to terms with new challenges in her life, she still finds herself sleuthing around in Washington State, only this time the mystery is much more personal than she’d like to admit.
A month after the killing of sorcerer-vampire Cory Littleton, life seems to have returned to normal in the Tri-Cities area, at least as normal as it could be in an area inhabited by werewolves and vampires and other things that go bump in the night. The heat wave has stopped, and Mercy, Adam and the gang take advantage of the opportunity to get away from the stress of the past several weeks.

But when a corrupt Bureau of Fae Affairs agent is found murdered, her mentor and friend stands accused of the deed. Not only that, she is stuck in the middle between two jealous werewolves vying for her affection. Despite the pandemonium, Mercy hits the street, looking for evidence disproving her friend’s guilt all

while juggling domestic troubles that would make any thirty-something faint.

It sounds like the stuff of a soap opera. But while the various plots and subplots do slow down the story somewhat, unlike previous novels, “Iron Kissed” is incredibly mature.

All the characters – Mercy included – are more third dimensional than they ever were, wrestling with conflicts and moral ambiguities that give them added depth. This is a dramatic improvement from the past two novels, which were long on action, but short on nuance.

That doesn’t mean that the action is less intense, or the dialogue less witty. It does mean that the series is going in a new direction, one which will anger hard core purists, but allow the series to grow.

At 304 pages, the novel is anything but a slog, certainly not a gargantuan epic. While it is slow in certain portions, the action, not to mention the more seamy side plot, makes it worth the effort of reading every single page. This may not be as cut and dry as the previous two novels, but it is certainly a step up. Kudos to Mrs. Briggs for bringing her A-game to a series that in lesser hands would have been found lacking. With at least four more books in the series contracted hopefully we should be treated to more nail biting, jaw dropping adventures ahead.