Jack Dann is an American writer best known for his science fiction, an editor and a writing teacher, who has lived in Australia since 1994.

JMW: Hello, this is Jean Marie Ward for BuzzyMag.com. With me today is award-winning, best-selling writer and editor, Jack Dann. Welcome Jack. When you started out you were primarily science-fiction then about 20 years ago you started specializing in historical fantasy and alternate history. What prompted the shift?

Jack Dann: I think writers grow into their work somehow. The big shift was with The Memory Cathedral, which might be categorized as alternate history but it’s really secret history and I’ve always done a lot of research even when I was doing the science fiction. One is research, extrapolating forward, the other is an historical novel, is extrapolating backward. So I got the bug and then I followed that up with The Silent, which is pretty much a straight historical novel, although it’s got elements of magical realism, which most of my work has.

JMW: Yes, I remember that you did something, a variation on an F. Scott Fitzgerald story?

Jack Dann: Yes, yes, called The Diamond Pit, which was basically a homage to Fitzgerald’s, Diamond As Big As The Ritz.

JMW: You’ve written about James Dean and Da Vinci in The Memory Cathedral and a simple civil war soldier in The Silent.

Jack Dann: No, in The Silent, actually it was a kid…

Jack Dann: …who sees his entire family murdered and it’s such a shock to his system that he basically fantasizes that he can be invisible.

JMW: Yeah, but the point being…

Jack Dann: And stops talking, unlike me.

JMW: The point being though, you’ve got a kid, a simple, ordinary person and then you’ve got James Dean and Da Vinci, two cultural icons. What attracted you to subject matters so diverse?

Jack Dann: Okay. Novels find me, somehow. I mean, that’s the way that it is, it feels psychologically. So, I was reading the introduction to Kosinski’s Painted Bird for an essay that I was doing for a British publisher, and in that introduction he said that, the only thing that was similar to his experience during the second world war was something he had read about feral children during the civil war, which formed gangs and were on their own. And when I read that, suddenly it was like, “oh no, I do not want to write a civil war novel but that’s my next book.” And it didn’t turn out to be a book about gangs and feral children, it turned out to be my protagonist, whose family sent him away to protect him and he ended up alone.

JMW: How important is research to your writing process?

Jack Dann: Well, the research is, in a sense it’s everything. It’s integrated with the book. The research isn’t about slathering all of this information to the reader. I figure, I need to know, I have to research 90% more than whatever is on the page, but I have to visualize it. It has to live inside my head, and the only way it can do that is if I know enough so that I can clothe it emotionally, physically, et cetera.

So, it’s the little details. Like with the Renaissance, how do people eat? What do the toilets look like? How do they sleep? What’s their mindset? I can, of course, go on and on. So in The Memory Cathedral, you’ve got Machiavelli getting awakened and he’s sleeping naked with a hat on because the hat would keep the heat in. And even if the reader doesn’t know all of the words or the ideas the authenticity comes through via context.

If you’re going to write a story about a true historical novel, as opposed to a costume drama, you have to understand the mindset or you have to try get close to coming to terms with the different mindset because people thought and felt differently at different times than we do. And that’s when during the panel, we’re talking about and we got into the whole thing with the bicameral minds stuff and people literally hearing the voices of the Gods.

JMW: Yes. Well, some people today still claim they do.

JMW: That’s another interview all together.

Jack Dann: That is definitely another interview.

JMW: You famously support writing workshops as a way for writers to hone their craft. What would you advise to writers who, for whatever reason, can’t attend workshops or immersive courses?

Jack Dann: Well, when I first started writing the thing that I found the most helpful is that I didn’t have anyone to run to. I would take writers who I really, whose work I really loved. And I can remember specifically, John Folds and Fitzgerald and I taught myself to read as a writer instead of a reader. And what I did, I would write out, I would copy sentences, paragraphs to get the sense and the feel, the visceral feel of how they wrote.

Now, all of this becomes, goes into your unconscious and is there when you need it. You don’t end up writing like Fitzgerald. I told Gardner Dozois once 800 years ago, I had just written a story and it was in the style of Kosinski and I said, “you’ll see that it is,” and he looked at it and he laughed. He said, “No, it doesn’t look like Kosinski.” At that time, if I could write like Kosinski I would have been in very good shape.

So, what I would tell writers is that, don’t read books the way you watch a movie, where you just immerse yourself in its great fun. If you want to read it as a writer, it becomes less fun because what you do, whenever you hit something that goes wow, you have to then go back and figure out how did the writer do that? And then you add it to your store and that, I think, is one way to do it because you’ll start assimilating structures, and if you’re reading stuff that you love, stuff that moves you, authors that you really respect, the fact that you’re reading them in the first place, means that there’s some resonance between their work and what you want to do. So they end up as your teachers. And you put in those patterns, in other words, don’t think about that when you’re writing because any of that stuff that you assimilate will be there when you need it.

JMW: Speaking of the stuff that’s there, you mentioned in one of of the world fantasy panels or workshops that you’re working on something right now. Could you tell us a little about it?

Jack Dann: Yes. Well, it’s a novel called Shadows in the Snow and it’s basically paradise lost in the Renaissance. It’s an alternate history novel or it’s a fantasy, I’m not sure. I had made a statement in an interview, which could have actually been with you, I don’t remember, where I said, “I’m never going to write a fat fantasy.” Well, that was the wrong thing to tell my unconscious because it kept working away at me.

I mean, I love George Martin’s work, he’s a buddy. I love to read this but, I was, anyway… I had gotten this idea, so I’m writing this large novel that takes place in Florence and in Venice during the 15th century, and one of the premises is that the Gnostics, who believed that Jehovah was a demigod, that the Gnostics were right. So it’s the Gnostic’s world view.

That was the John Bar point, where things change, where instead of Christianity having it all their way, they don’t get it all their way and so it becomes the great battle. And one of the protagonists is from Virginia and the civil war who is the daughter of light, who actually is the aeon in another manifestation who gave birth to Jehovah, the demiurge.

I tried doing this, this is really pushing the envelope, but my idea was to do it from their point of view so that one of the protagonists is the angel Gabriel. So as they believed in angels and the way they acted on their lives, so was this happening in the novel. I started as I do many of these adventure actions and it becomes so layered at this point that, for me, this is major work and it’s been wonderful fun but very difficult.

JMW: I can imagine it would be because The Memory Cathedral wasn’t exactly slim, neither was the Rebel. I think you had to cut the Rebel by half?

Jack Dann: Well, actually, I’ve got an e-publisher satellite in Australia and we’re going to do the unexpurgated Rebel because it came in at somewhere… this was going to be my Dance To The Music Of Time. So the original word count was somewhere around 300,000.

JMW: Yeah, I remember that, yeah.

Jack Dann: So that will actually, and it’s funny because I had originally titled it Second Chance. So we’re going to call it, The Rebel: Second Chance.

JMW: Yeah, second chance for the Rebel itself. So that’s cool though.

Jack Dann: And that will also be published in print format, well paper format. It’s all print…

JMW: Well, any estimated publication date on that?

Jack Dann: I’m thinking it will be next year.

JMW: Anything that you would like to add before you go off and collapse, politely?

Jack Dann: Well, yes, I will do so. I don’t know, you can cut this, but I did a master workshop for the Queensland writer’s center last year and they asked me if I would do a YouTube thing. So you had asked a question, what would my advice to, well, I did a 5 minute YouTube on what writers need to do. So, to add to this, if they look up Jack Dann, there’s another Jack Dann who is a musician, so they’ll find 50,000, there’s also a band, we’ve been cut…would you believe that there’s a band called The Man Who Melted Jack Dann?

JMW: And thank you, for BuzzyMag.com. 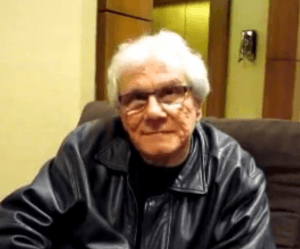