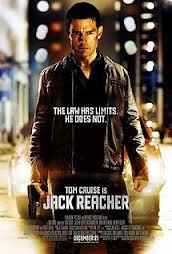 Tom Cruise is Jack Reacher. He is a ghost, living off the grid, taking life as it comes.

He is not the exact same Jack Reacher of Lee Child’s books–that guy is menace personified is the form of a six-foot-five, muscular, all-but-silent ex-MP. Cruise plays it more with his eyes and his body language, trying to convey a willingness to be as brutal as it takes to get the job done. For the most part, it works. He pulls out all the stops.

Cruise is aided by clever dialog, and I really do like the screenplay. Keeping to the spirit of the book, though, meant a lot of him just looking around and thinking. Hard. You could almost see the gears turning. It’s too bad circumstances didn’t allow for a plot device like him talking about what he saw into a handheld recording device, a la William Peterson in Manhunter. The script does walk far enough away from the “man of few words” to give Cruise a couple of well delivered monologues that really sum up Reacher’s philosophy.


From the clever beginning to the finale when every loose end is tied into a neat bow, this film is ful of intellectual details, interesting characters, and lots of twists and turns. The suspense keeps building, and you never know who to trust. All of this despite the fact that the viewer knows from the beginning who the killer is, although some of the whys are in question.

Things are never quite what they seem.

Reacher’s sometime partner, sometime antagonist is Helen Rodin, attorney, played really well by Rosamund Pike. She never loses sight of the rules, but seems willing to consider other options, if enough evidence is present. She is an interesting, yet frustrating character. There’s a nice dynamic between her and her father the DA (Richard Jenkins) as well.

Detective Emerson (David Oyelowo) is a Pittsburgh cop assigned to investigate the crime, and he’s on top of things. Often, a movie featuring an outside investigator like Reacher would take the easy way out by having the police bumble their way through things. They gave in to temptation in other aspects of the film, by including a lot of really stupid low-level thugs.

Well known director Werner Herzog does a great turn in a small part, playing a really creepy guy with pretty much no boundries at all.

Watch, too, for a return of the wonderful chemistry between Robert Duvall and Tom Cruise, when the two share the screen. Like the best parts of Days of Thunder, these two are marvelous playing off one another, with an intense sense of both comaraderie and competitiveness.

Overall, Jack Reacher is an engaging, well put together thriller with a lot of nice performances. Definitely above average action fare, and entertaining.

Look for the cameo by author Lee Child as the desk sergeant who gives Reacher back his belongings at the police station.

Warning: This one could be triggery for folks disturbed by the recent shooting in Connecticut.

Read The Original Jack Reacher
One Shot by Lee Child

Elektra Hammond emulates her multi-sided idol Buckaroo Banzai by going in several directions at once.