JMW: Hello, this is Jean Marie Ward for BuzzyMag.com. With me today is James A. Moore, the renaissance writer of novels, game modules, manuals and short stories. Welcome, Jim.

James A. Moore: Thanks for having me.

“, your adventure fantasy series surprised a lotta folks who only knew you as a horror writer. What was the inspiration that compelled you to write in this new world?

James A. Moore: You know, I started way back in the day as a reader of fantasy and the problem that I ran across for a while was that I kept reading the same book with a different name. And most of those books involved the orphan boy of your choice, the great powerful evil coming back from the past and a mystical weapon, it could be a ring, a sword, a book, whatever. The kid ended up with this and he was the only one that could save the world. And I hated that, but I also loved fantasy. So while I was writing horror, I kept coming up with ideas for fantasy and pushing them off to the side. And I finally said, “You know what, I like this one. I like this one enough that I’ll go ahead and write it.”

JMW: Oh, very cool. Was is hard to shift from one genre to the other? 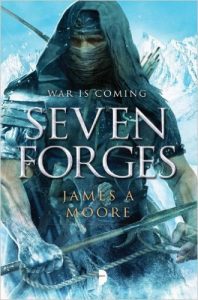 ” that grew to, I think, somewhere around 200 or 250 total names for people and countries.

JMW: And they can’t be too hard to say.

James A. Moore: Quite true. I make a few exceptions to that, but not too many. The book I’m writing right now, actually I’ve got a full lexicon that’ll be going into the book because some of the names are complex.

JMW: Oh, wow. Is there any interest from your friends in the gaming community about translating of the world of the “Seven Forges” into a game?

James A. Moore: There have been a few minor discussions, but nothing major yet. 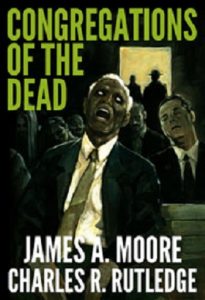 JMW: Oh well, you always have horror just like Rick and Ilsa always had Paris. Speaking of horror though, since the 1980s, maybe since the days of H.P. Lovecraft

, horror has been most strongly identified with Northern writers, but you’re from Georgia. What unique qualities does a Southern gentleman bring to the table?

James A. Moore: I think there’re a lot of Southern Gothic philosophies that you’re not going to get out of the North. So it’s often subtler and quieter horror than you would run across from somebody, for example, out of Massachusetts or out of New York.

JMW: What do you mean by Southern Gothic philosophies?

James A. Moore: You don’t have to get there in a hurry.

James A. Moore: You can do a lot of building of suspense and slow tension rising without having to show anything for a long time. You can’t necessarily do that in a lot of other fiction.

JMW: This is true, this is definitely true. In addition to all your writing projects, you co-host the Three Guys With Beards podcast, can you tell our viewers a little bit about the show and how you got involved?

James A. Moore: Well we’re filming this at Dragon Con, and the funny thing about that is it kinda started off of a conversation at Dragon Con. I’ve known Christopher Golden, I’ve known Jonathan Maberry for years, and we ended up for the first time on a panel together. And when the panel was done, Jonathan had a big old smile on his face and said, “We should do our own radio show,” kind of as a jest, and then Jess Roberts asked me if I’d be interested in doing a podcast, and I thought about what Jonathan said and said, “He’s right, we should do our own talk show.” And that is quite literally where the idea came from. I talked to both of them and then I believe it was at World Horror two years ago, we did our first live podcast. And from there on, we’ve moved on to doing it with fair regularity.

JMW: And you have a panel with the same title here at Dragon Con, don’t you? 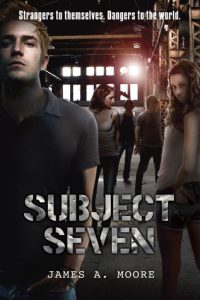 James A. Moore: We took a two month hiatus because all of us have horrible writing deadlines. And trust me when I say with the Three Guys With Beards, we’re doing it mostly just for the love. So we took the break that we needed to to get caught up on all of our stuff, and this weekend two of us are here, Jonathan could not make it, but Tom Sniegoski  has been or guest host a few times.

James A. Moore: Exactly. Though I yelled at him the other day because he shaved his beard off, he’s just got some scruff going. Three Guys With Five O’Clock Shadow doesn’t have the same effect.

Jean Marie: No it certainly does not. What do y’all discuss??

James A. Moore: Anything that strikes our fancies. Normally whatever’s going on in the news. Sometimes we’ll cut back from things that are just too dark, because the idea is to have a good time.

JMW: Do you wind up having some synergy in your writing, three of you just shooting the breeze like that?

JMW: Cool, very cool. In addition to the epic scope of the “Seven Forges“, you have a certain fondness for scoundrels like Jonathan Crowley of your “Serenity Falls” series. Are there anymore of his adventures in the offing? 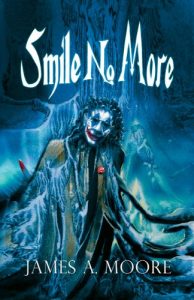 James A. Moore: There are several that are planned. I have two-thirds of a novel called “Boom Town“. “Boom Town” is with Jonathan Crowley in the old West.

James A. Moore: He gets around.

James A. Moore: And a couple of other novels that are planned in a novella called the “Doll Maker” that I’m doing with a friend of mine, Charles Rutlage.

JMW: And can you tell us anything about that or?

James A. Moore: On the “Doll Maker“, it’s going to be set in Victorian London. It’s actually a story with him and a Barbarian named Karn, and they run across each other in a couple of other occasions. And it will deal with a murder mystery and with monsters in Victorian London.

JMW: Okay, what else are you working on now?

James A. Moore: I just finished the first book in a series called “Tides of War“, and that’s called “The Last Sacrifice.”

JMW: What is the series?

James A. Moore: Well, you always run across these situations in old B-movies. For example, King Kong, where they meet the fair maiden and they tie her up, and they’re gonna sacrifice her to the gods, and then our heroes come along and stop that and nothing happens. And I was getting that stuck in my head, and I thought, “What would happen if the gods actually got pissed off?” So in this story, our hero runs off to try to save his family from being sacrificed, stops the sacrifice from occurring properly and triggers Armageddon. And the next series of books, the entire run of the books is him trying to undo what he has done.

JMW: And tell people that it wasn’t his fault.

JMW: Is that a guy thing? I thought that whenever something like that happens, you all say, “But it was an accident.”

James A. Moore: He’s blaming the gods for it. They’re the ones that are having a temper tantrum.

JMW: Well that’s a reasonable assumption on his part. Sounds wonderful. I’ll look forward to reading it. Is there anything you’d like to add?

James A. Moore: To those people who are reading and reviewing my books, thank you very much. And thank you for having me on. 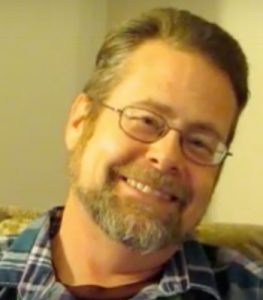