James Frain speaks about his role as Richard Shepherd on “INTRUDERS” 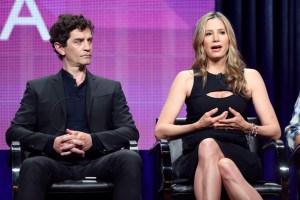 James Frain’s face should be familiar to anyone who watches historical and/or genre drama. On the characters based on real people side of the equation, the actor from Yorkshire, England has played C.S. Lewis’ associate Peter Whistler in SHADOWLANDS, Prince Yusupov in RASPUTIN, conductor Daniel Barenboim in HILARY AND JACKIE, Cesare Borgia in LEONARDO, Thomas Cromwell in THE TUDORS and Lord Warwick in THE WHITE QUEEN. Science fiction/fantasy/horror/action gigs include TALES FROM THE CRYPT, LOCH NESS, THE COUNT OF MONTE CRISTO, 24, INVASION, FRINGE, FLASHFORWARD, TRUE BLOOD (as obsessive vampire Franklin Mott), TRON: LEGACY, THE CAPE and GRIMM. This isn’t counting uncategorized fare like NOTHING PERSONAL and WATER FOR ELEPHANTS.

Now Frain is back in science-fiction/horror mode with THE INTRUDERS, airing on BBC America on Saturdays, adapted by X-FILES veteran Glen Morgan from the series of novels by Michael Marshall Smith. The Intruders of the title are secondary personas that turn up in some individuals and take them over. James Frain plays Richard, an assassin sometimes partnered with Frank, portrayed by Robert Forster. We see there’s a pattern in Richard’s killings, as his victims tend to be people who might notice changes in personalities of their nearest and dearest. However, Richard secretly declines to kill Madison (Millie Bobby Brown), a little girl he’s assigned to target, and complications spread from there.

Following a Q&A session that BBC America holds for INTRUDERS for the Television Critics Association, James Frain remains to answer a few more questions about his work on the series.

James Frain acknowledges that his hit man with ties to the supernatural is not an entirely new sort of character for him. “It’s similar territory. What was interesting about it was, when I spoke to Glen about his ambition for what he wanted to do with the role, to flesh it out and to take it in unexpected directions.”

This isn’t always the case, James Frain notes. “Some times in the past, like the character I played in TRUE BLOOD was just basically crazy,” he laughs. “There’s not much more you can do with crazy people. This guy’s not crazy. He has some very complicated motivations and he has a very fleshed-out back story, and this occupies more shades of gray than black and white. So the idea was, we start at the beginning with an appearance of who we think this guy is, and slowly we peel back the layers of the onion and find out there’s much more to him than we first realized.”

So, without getting too spoilery, what exactly does Richard do?

“I’m a shepherd,” James Frain explains. “It turns out there are a few of us. We’re actually employed by Qui Reverti to shepherd people in and out.”

Who or what is Qui Reverti? “Qui Reverti is the name of the organization that is running this whole sinister aspect in the show. And they employ the shepherds. And they promise them eternal life in exchange for them protecting and erasing any kind of suspicion that there is out there. They just are trained and paid assassins, basically. So it’s different than being an Intruder. I work for them.”

Does this mean that Richard is not the same sort of entity as the people we see undergoing radical personality transformations? “Right,” James Frain confirms. “But in the first episode, you see my character on the beach. He’s about to shoot Madison, and he can’t do it. That’s an interesting kind of problem, because there are very good reasons why I need to get rid of this kid, and the fact that I can’t do it because of some sort of reawakening humanity or conscience causes enormous problems for everyone. And I spend most of the series trying to catch up with making that mess fixed. And so then you start to see, okay, so he’s not completely [evil]. There’s someone there; there’s a person in there somewhere.”

Playing Richard hasn’t required much of a learning curve, James Frain notes. “I pretty much have it down. I had a bigger gun than I’m used to, but apart from that, it was always comfortable territory. No horses to ride.”

The actor admits he wasn’t all that familiar with the Morgans’ tenure on THE X-FILES. “I never got into THE X-FILES, funnily enough, although my wife is. My wife is a big fan of THE X-FILES.”

As for working with Robert Forster, James Frain reports, “Oh, it’s great. It’s great. I mean, he just has the grace and he has that voice and he has that command. I just like to watch him do his stuff and to listen to him. And then it’s like,” James Frain plays coming to a sudden realization while observing Forster at work, “‘Oh, I’ve got a line now.’”

Regarding upcoming projects, James Frain relates, “I’ve got a movie with Parker Posey called THE ARCHITECT, which is going to come out at some point next year, I think, and I’m doing a movie now called HEADLOCK with Mark Polish, Andy Garcia and Justin Bartha, which is an indie movie which we’re shooting right now in L.A.”

During the Q&A session, executive producer/show runner Morgan mentions that his brother Darin Morgan, who won an Emmy for his X-FILES teleplay “Clyde Bruckman’s Final Repose” and also penned the much-loved X-FILES episode “Jose Chung’s ‘From Outer Space,’” is on the INTRUDERS writing staff. Moreover, Glen Morgan says that Darin has a particular interest in writing for Frain. “When James Frain auditioned, I knew that Darin would plug into James since James had a Darin sense of humor, and he has some great scenes with James and Millie that I’m cutting right now that turned out really great.”

Did Frain know that Darin Morgan had such an affinity for his performance? “No,” says James Frain, who is surprised and flattered by this news from his executive producer. “I just heard it today. I didn’t have very much information about the show – I sort of took it on trust, the people involved and the quality of the writing, it just felt right, and it’s paid off for me really well. I knew Glen was sort of responding to some things that I’d told him about my ideas for the script and my own personal experience, and suddenly they would appear in scenes, so I knew that the writers were responsive to us, they weren’t just handing down commands from above, and that is always extremely satisfying and humbling, really. You have to be careful what you say,” he laughs. “It will end up in a script at some point. But to know that the writers care that much that the actors have a good experience is very reassuring and makes for a good team.”

Is it helpful to have a writer/producer who’s as rich in television history as Glen Morgan?

“Yeah,” James Frain replies. “It makes all the difference. His confidence is undeniable and his command of the medium is unquestionable, so you can just get on with it.”