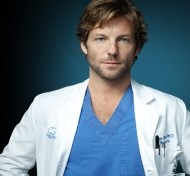 To many people, Jamie Bamber is best known for his BATTLESTAR GALACTICA character, space fighter pilot Lee “Apollo” Adama. British and BBC America audiences saw him playing U.K. police detective Matt Devlin in LAW & ORDER: UK. Now the London-born actor is playing brilliant surgeon Dr. Tyler Wilson on TNT’s new series MONDAY MORNINGS, airing Monday evenings at 10 PM, which deals with the real but little-known hospital Morbidity and Mortality meetings, usually held in the title timeframe. This is where doctors talk about patient deaths, what might have been done to prevent them and other related topics.

There has just been a big Q and A panel for MONDAY MORNINGS, featuring all of the series leads, including Bamber, Alfred Molina and Ving Rhames, plus Dr. Sanjay Gupta, who wrote the novel that is the source for the series, and his fellow executive producer, series creator David E. Kelley (THE PRACTICE, BOSTON LEGAL, CHICAGO HOPE). Bamber very kindly takes time in the foyer outside to answer more questions.

Asked whether there is any similarity between playing his futuristic hero and his present-day doctor, Bamber says, “The only one – it’s a bit of wordplay. Inner space instead of outer space, and each is equally as fascinating.”

It turns out that Bamber has played a doctor before. “briefly, on a British show called PEAK PRACTICE, I played a country doctor. [That character] was very different from this. He was at the beginning of his career as a general practitioner, and then this is someone who’s at the height of his skills as a neurosurgeon, at the very, very cutting edge of medicine in a big, big hospital. This guy was in the middle of nowhere in Derbyshire.”

As far as researching playing a top neurosurgeon, Bamber explains, “I was put in touch with the chairman of neurosurgery, Neil Martin, at UCLA, and I got to go and watch him actually do a craniotomy and I spent eight hours in the o.r. [operating room] with him, watching what he does and removing a sort of small, three-fingered-fist-sized tumor from some poor soul’s frontal lobe, and I got to do the rounds and see the patients before and after, and then I got to see Dr. Shahinian at Thousand Oaks Surgical Hospital, who did an endoscopic surgery, so I saw as much as I could live, and talked to as many neurosurgeons as I could, and then I had the advantage of going in and Sanjay actually being there [on set] to put my hands in the right place, to give me added lines – it’s an amazing crutch to have, as an actor playing a surgeon, to have one of the preeminent neurosurgeons in the world right behind you, who also happens to have created your character. It was a unique gift.”

Given the nature of his new role, is Bamber now more conscious of how he uses his hands, as these are so much a part of a neurosurgeon’s work? “You know what?” Bamber says. “I actually am, because one of the lines that Alfred’s character uses all the time is, ‘Wonderful hands.’ He always talks about the hands of these people. And what Sanjay has told me many times is that these people are really manual workers. Yes, they have to study fourteen years and yes, they have to know an awful lot in their own intellects and they have to learn all this stuff, but when it comes right down to it, their hands are the only things that actually touch the patient, through the surgical tools that they use. So I am. Whenever I have to do something fiddly, I think, ‘Well, this is the closest I’ll get today to brain surgery, let’s see how well and patient I can be with this fiddly task.’ So yeah, in a small way, I’m aware of it.”

Can Bamber relate his mindset for playing Tyler Wilson to anything in his real life? He says, “It’s funny, the way I am – I did a lot of research, read a lot of books, saw a lot of actual doctors in their workplaces, wore a lot of scrubs, and I come home and I do feel like I’ve done the procedure. It’s weird. I’ve kind of had this vaguely arrogant perception that if anybody here dropped down and Sanjay Gupta was [in another room] at the buffet table, I’d try and slice [the patient’s] head open and clip off an aneurysm or whatever it is. So you do take on a bit of whatever it is that you do. I know very well that I’m nowhere near that,” he laughs, “and I was never that way [interested in medicine] at school, I was never that way inclined, but my fascination for it is such that I could envisage a different life.”

Has Bamber ever experienced anything analogous to the pressure of having someone’s life in his hands? “No.” It turns out that “no” is qualified. Bamber relates a story of what occurred when he was researching his role. “When the surgeries were going to happen, I got a call saying, ‘We don’t know when the surgery is going to come in, you have to be on call.’ So sitting down at the table with my wife for dinner and she starts pouring a glass of wine, and I say, ‘No, I can’t. I’m on call.’” He laughs. “She’s never let me forget that. She said, ‘You’re not actually a doctor or a surgeon’” But I took a bit of it on in those situations, and when you do the scenes, yes. We often have the actor actually lying there, be it a small child or whoever it is, and you do feel the massive weight of responsibility, because I’ve seen the real situation and I’ve seen the families beforehand and I’ve seen how nervous they are and I’ve seen how much is at stake, and I’ve seen the poise and confidence with which these surgeons talk to these families, and then they go in there and trust themselves to open [the patients’] heads up and remove bits of their brain, and that’s an extraordinary thing to witness.”

In MONDAY MORNINGS, Bamber is playing an American, while colleague Molina uses his own British accent. Hearing Molina, is it hard for Bamber to maintain his U.S. dialect? “It’s very second nature. It’s a different mind-space that you go into, and I’ve been lucky enough to do it for five seasons on BATTLESTAR [where costar James Callis spoke with his original U.K. accent, while Bamber did a U.S. one], although it’s a different character and a different situation, I’m used to acting with Brits playing Brits [while acting] as an American, so I really don’t think about it. Occasionally, I’ll tease him, because he’ll have an American line that he’s saying in a British accent, like, ‘I’ll take it under advisement.’ We don’t know what that means. ‘Normalcy’ and words like that that we would never, never use. And it’s very interesting, because obviously Brits that live here for a long time do start to use these words, but it’s working out which ones work and which ones don’t. So I’ll comment on what he’s doing. He leaves me well alone, though.” This means that Molina doesn’t tease Bamber about his accent. “He’s a much nicer man than I am.”

According to IMDB, Bamber has two films in post-production, JOHN DOE and BEFORE I SLEEP. The actor says he doesn’t know what project he’ll be tackling next. “I’m taking a break and waiting to see what happens with this show, so I know a bit more about how the land lies and then hopefully, the opportunity will come along shortly to either fill the gap or I’ll take on a different adventure.”