JOHN AKOMFRAH ON “THE MARCH”

One of the most pivotal moments in the American (some would say worldwide) civil rights movement occurred on August 28, 1963 with the March on Washington for Freedom and Jobs. It was there that Dr. Martin Luther King, Jr. delivered his eternally potent “I have a dream” speech.

To commemorate the fiftieth anniversary of the March, PBS is airing a week full of specials about it, including THE MARCH @ 50 and MEMORIES OF THE MARCH.

The documentary entitled simply THE MARCH airs on Tuesday, August 27, 2013. Directed by filmmaker John Akomfrah, who produced with his partners Lina Gopaul and David Paulson, narrated by Denzel Washington and executive-produced by Krysanne Katsoolis, Robert Redford and Laura Michalchyshyn via Sundance Productions, THE MARCH combines rare archival footage of the historic assembly and what led up to it with present-day interviews with those who participated in the historic event.

During the panel, Akomfrah says that there were both happy and sad aspects to the archival footage. “There were some extraordinary bits of footage that I had no idea existed. Some came in literally as we were about to finish everything. So you’ll see three sets of home movies made by people who attended the March. I don’t know how many people have seen the [‘I have a dream’] speech in the condition that you’re going to see it in this film. I think lots of people have seen it online, but we made sure that we found just about the best 35-mil[limiter] copy of it.”

However, he adds, “I was surprised at the lack of material as well as the abundance. It’s an odd thing to say, but a lot of the TV coverage has been lost – quite a bit has been trashed, frankly. And it surprises you, because you think [footage of] that iconic an event would be preserved. The most important thing for me, though, was the people,” here he indicates his fellow panelists, “because they were much more valuable than any library.”

Following the panel, Akomfrah makes himself available in the lobby for a smaller, more informal chat. English, with parents he describes as “West African radicals,” Akomfrah explains how he got into making documentary films. “I was part of an arts movement in England in the late Eighties. I was just convinced that we needed to tell different stories and the best way to do that was to get those people themselves to tell those stories. A lot of us involved in the black arts movement in England in the Eighties got into making films for that reason, basically, and I’ve made them for television, I’ve made them for the cinema, I’ve made them for art galleries. I enjoy making them.”

Akomfrah was two-and-a-half years old and in England when the 1963 March on Washington took place. Regarding his interest in this piece of history, Akomfrah relates, “Like everyone, what I wanted to understand was how the March came about. I’d heard the speech – how did that speech get written? And so it’s a very forensic look at the first eight months of ’63, because there are things that happen in ’63 that make the March possible. There’s a lot more archival footage from other events. So we follow that.”

Where did all the footage come from? “News cameras, in the main,” Akomfrah says. “Sometimes big things, sometimes small things. So for instance, the Birmingham [Alabama] demonstrations have a direct bearing on the march, because it’s really when the Birmingham demonstrations started in April that one of the key architects of the march, A. Philip Randolph, sent an emissary to Dr. King to say, ‘Look, let’s stop doing this regional thing, we’ve got to do something national. We’ve got to go national with this, otherwise nothing’s going to happen.’ So at these regional events, you can see King with the emissaries, talking. The USIA made a film called THE MARCH, which has been sort of cannibalized and bits of it have been used over the years, but the inter-negative is still sitting at NARA [National Archives and Records Administration]. I said to them, ‘We want a transfer of that,’ because the American audience deserves it.”

Although many viewers associate early Sixties news footage with black-and-white cinematography, Akomfrah says, “There’s a lot of color footage of three people in particular, in their own way. One is not really a home movie person; he’s more of a would-be photojournalist. This was his first assignment. So he filmed in 16 mil[limiter]. And I’ve got two other people – a fifteen-year-old kid with a Super 8 camera and he gets Bob Dylan onstage.”

Not all of Akomfrah’s present-day interviews made it into THE MARCH due to time constrains, the filmmaker explains. “I interviewed in the end forty-five people, and I think about twenty-eight made it into the film. The PBS version of this is fifty-four minutes; the BBC version is fifty-nine minutes. So there are one or two more people in that than yours, but on the whole, I don’t think there was anyone who was left out who had a story that was unique. I think there are people who could have embellished what’s already in the film that went out, other March attendees or celebrities, Tony Ben or Bono. They don’t bring anything that’s not already there, but they would have made it just richer, but it’s an hour, and with the best will in the world, you can’t fit forty-five people into an hour – it’s just not possible,” he laughs.

Akomfrah has made many documentaries about civil rights, but he says what makes THE MARCH special is that, “The March on Washington for Freedom and Jobs was, as Clarence [Jones] was saying, a game-changer, but it was a game-changer globally. I mean, it changed things globally, and the differences it made to the quality of lives outside of this place [the United States] – you’ve got to remember, this was an event about an idea that wasn’t even believed by most of the world. Most of the world, three-quarters of the world, was still colonies. People didn’t have those rights. The March changed the language of justice, changed the politics globally.”

At the time the March took place, news coverage was, Akomfrah says, “Sort of a mix of everything, really. Somebody asked the question of how the March was perceived afterwards. I can tell you for a fact that beforehand, there was a lot of fear and trepidation,” he laughs. “I’ve looked at just about every newspaper coverage on it, every TV [broadcast], and it’s dominated by a kind of almost palpable fear, a tangible fear that something is going to go wrong, that this is not really going to work at all. So the relief when it does work and nothing happens is huge.”

A lot of celebrities participated in the March on Washington, including Harry Belafonte, Marlon Brando and then-liberal Charlton Heston. “The celebrity quotient was much more important than it seems now,” Akomfrah explains. “Now, when everybody believes that if you do something like this, you have to get celebs – King and Belafonte and the whole group were aware that the FBI in particular was spreading this stuff [false rumors] that the March is going to be a disaster. And so Charlton Heston and Marlon Brando – they were sympathetic, they just had to be asked. Going after them was a way of saying, ‘Look, if these guys believe it, then it must be okay.’ And there’s incredible footage in there. I don’t use much of it, but there’s a meeting at Charlton Heston’s house and they’re discussing whether they should do it, not because they didn’t think it was a good idea, but whether if they did it people would think it was just self-serving, like, ‘Oh, we’re just doing it because we want people to see that we’re stars.’ And they had a huge discussion. Marlon Brando says, ‘Look, we’ve just got to do this because it’s the right thing.’ ‘Okay, what do you want to do? Let’s just do it.’ That’s not in the film, because it’s just too long.”

Asked if there have been comparable civil rights events in his native England, Akomfrah replies, “There’s nothing comparable in the world. I can’t find one event which, as a single event, has such ramifications fifty years later. You look at everything about it, and there’s nothing that the March was about which is wrong today. You can’t say that about just about anything now,” he observes with a laugh. “It’s an extraordinary moment, and the fact that it happens here is something to be very proud of, because actually, this was you [as Americans] talking to yourselves about how you can make yourselves better. And it did make a difference – it made a huge difference in your lives.”

Is there anything else Akomfrah would like to say about THE MARCH? “Yeah. That regardless of what it feels like now, I still think the dream was realized in this place, in lots of really important ways. And I hope it continues. I think there’s a sort of cynicism around the March that’s been there ever since [King] was deified and made into a god.” Akomfrah laughs at his own exaggeration of King’s historical status. “The March is still important for people like me. By people like me, I literally mean people of my generation, whose life chances were just inexorably made better by [the March]. For my generation, we the people who just came of age after the March, it was a huge thing.”

Akomfrah is heading back to London now. Does he have any other upcoming projects he wants to discuss at present? He laughs. “Rest!” 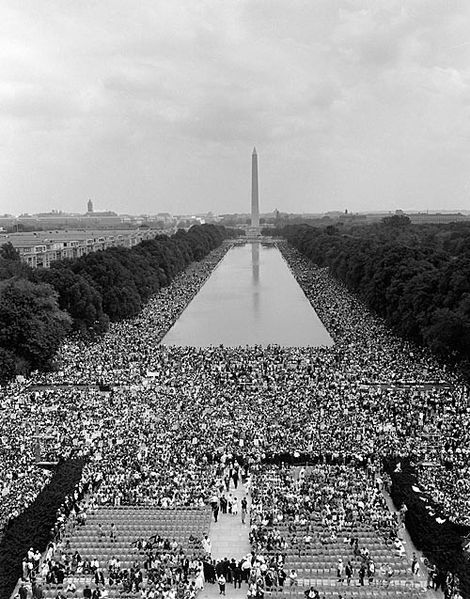 Article Name
John Akomfrah on "The March" - PBS
Description
One of the most pivotal moments in the American (some would say worldwide) civil rights movement occurred on August 28, 1963 with the March on Washington for Freedom and Jobs. It was there that Dr. Martin Luther King, Jr. delivered his eternally potent “I have a dream” speech.
Author
Abbie Bernstein
BuzzyMag.com