JMW: Hello. This is Jean Marie Ward, from BuzzyMag.com. With me today is Jon St. John; voice actor. Hello.

JMW: Could you give our viewers and idea of how did you get into voice acting?

Jon St. John: My voice acting career actually started with a radio career first, where I was not only a DJ but then a wacky morning character. I did all the character voices for morning shows all over the country.

Then in, I guess it was 1995 while I was production director at a radio station in San Diego, I happened to meet, by chance, Loni Manila, who’s one of the top casting directors for video games; she has a company called Audio Gods. She was casting for a game called Duke Nukem, and I believe that was the first audition I ever did. She was in my studio to record a commercial project I was producing, and asked me when I started showing off doing silly voices, if I was interested in doing voice acting. There was this game called Duke Nukem coming out, would I be interested in auditioning for it? That’s pretty much where it started, right there, just by a chance meeting with Loni.

JMW: Do you play video games?

Jon St. John: Very rarely. Of course any time a game I’m on comes out, I’ll spend a few hours playing through it just to see if my performance is any good. I don’t mean my gamer skills; I mean my acting in the game. Other than that, not really. My job is a voice actor, I don’t have a lot of time for gaming because I have kids who play those games and I’m busy raising them for the most part.

JMW: How do you prepare? You said you look at the game, or do you look at your character? Do you have a full script that you read through?

Jon St. John: I know that a lot of voice actors like to have the script in advance. I don’t; I work a little bit differently. I usually do see the artwork, and I don’t actually like to see the artwork before a session either. Let me explain, the reason for that: The way my brain works, if I see a character picture and a description, then I’ve made up a voice in my head. Sometimes that voice gets stuck. When I end up in a recording studio with a director, they may direct me in a totally different way than that voice that’s stuck in my head, and it can be a bit of a stumbling block to get past that voice I’ve already created for the character. For me, it’s easier to show up and pretty much cold-read the script and have the director tell me on the spot what the texture of the voice is, what the age, what dialect; get it all there on the spot and dial in the voice right in front of the director, and then just stay in character through the session.

JMW: You’ve been doing voices, though, a long time, even before you were doing video games. Didn’t you grow up listening to Looney Tunes and Mel Blanc?

Rest of Interview on Video
Interviewed by Jean Marie Ward 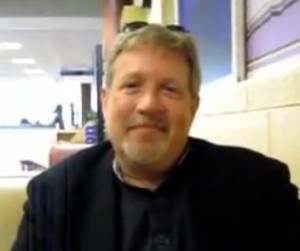