K-9:
The Unsung Companion To Doctor Who! 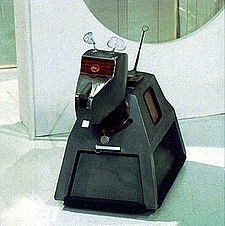 I love Doctor Who. I am, and have been for several years, a big fan of the show, a Whovian if you will. It’s smart, it’s sexy, and it’s passionate. I love that the Doctor is not perfect yet still the hero and champion I need him to be.

A huge part of the charm of the show is that the Doctor, no matter his incarnation, always travels with a companion. This person, or group of people, is lucky enough to travel both time and space with the Doctor as he shows the universe to them. The companions’ job is never an easy one, as they are the character the audience usually best identifies with. The companion, often a woman, is frequently confused, as the Doctor is an old hand at time travel and has seen the entirety of the universe twice already. He is an alien and has his own motives spurring him into action. The companion asks a lot of questions because the Doctor-for all his mad brilliance-is alien and sometimes hard to understand. So far there have been forty-two different companions and each one has brought their own special something to the table but K-9 is one of my favorites so far. 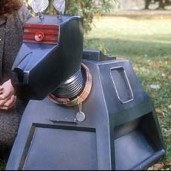 In case you don’t know, K-9 is a robot dog. He is short, box-like, and has an antenna for a tail; the very image of what you may think a robot dog circa 1977 looks like if you had a $12 budget to build one with. Don’t let that fool you though; it looks like someone spent up to $20 dollars on his radio-controlled construction. I know the name K-9 is an overused pun (K-9, canine, get it?) but ask yourself this question: Who started it? Doctor Who is a fifty-year-old TV show. The original name of the character was going to be FIDO (Phenomenal Indication Data Observation) but for reasons undisclosed was not used. Maybe it was too kitschy since there was his ship, the TARDIS (Time and Relative Dimension in Space) already and producers felt two acronymic names would be goofy. Yeah, right.

K-9 Mark I first appeared as a companion in season 15 to the fourth Doctor, played by Tom Baker, in an episode entitled “The Invisible Enemy.” I believe that although this is the first time K-9 appears on screen the character’s back-story tells us the robot dog has been traveling with the first two Doctors for years.

With encyclopedic knowledge of all things, a laser in his nose and an IQ big enough to let him banter with the Doctor, K-9 has had a long, strange life. The Mark I version of this robot traveled with the Doctor and his female human companion, Leela, for years. Eventually Leela decides to plant roots on the Doctor’s home world, Gallifrey; faithful K-9 decides to stay with her. This might have been the end of the lovable robot if in the very next episode the Doctor had not gone into one of many closets on the TARDIS and remove a box labeled K-9 Mark II. Every bit as smart and clever as his predecessor the Mark II also has the ability to sense danger and warn others in time for them to take precautions. Again the adventures continued with the Doctor and his new companion, another Time Lord named Romanadvoratrelundar, or Romana for short. For four seasons the adventure was non-stop but while visiting a parallel dimension K-9 is severely damaged and even though repaired the Doctor speculated the robot would only be able to work in the parallel dimension. Therefore, when Romana decide to remain in that universe it was only logical the Doctor gift her with K-9.

This is where things get weird, as spin-off shows and the main series are all considered canon. The person who created the character K-9 owned the legal rights to the character; so when the spin-off series “K-9 and Company” aired starring K-9 Mark III he was allowed to legally use his character but could not reference any “Doctor Who” episodes. But boy oh boy did they ride that fine line. The character, Sarah Jane Smith, probably one of the most beloved of all of the Doctor’s companions was gifted K-9 Mark III and together they had many adventures in her own spin-off, “The Sarah Jane Adventures.” Eventually poor K-9 falls into a state of disrepair, as Sarah Jane is only human and nowhere near smart enough to repair Gallifreyan technology. Knowing he is dying a pitiful death brave little K-9 sacrifices his life in order to prevent an alien assault and destroy their leader in a pretty spectacular explosion. In true Doctor Who fashion the Doctor replaced the robot and presents him back to Sarah Jane so she’s able to keep up the good work. Although the robot was completely rebuilt, it still had all of his original memories while being a brand new model, a feat worthy of the Doctor.

The final incarnation of K-9, the Mark IV, was in the premiere episode of the spin-off series “The Sarah Jane Adventures.” Due to legal red tape and copyright issues the little guy made only a brief appearance, claiming he was busy sealing up a black hole and would only be able to talk with her at intermittent times. When K-9 does return to earth it is via his new teleportation ability to do battle with an alien computer named Mr. Smith.


Although “The Sarah Jane Adventures” ended, we do know what has become of the Doctor’s beloved robotic companion. Like the other units before him the Mark IV went into semi-retirement and left with Luke, one of the show’s main characters, when he went off to college.

As far as I know, there has been no talk of bringing K-9 back into the BBC’s “Doctor Who” television show, but as we fans all know, things can change on a dime in the Who-verse. As big as the TARDIS is, and as beloved as the character was, I have no doubt that we’ll see our little hovering robot dog again.