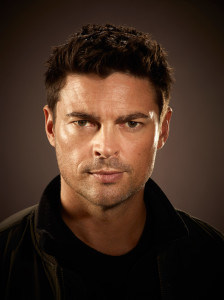 In Fox’s new series ALMOST HUMAN, from J.J. Abrams and J.H. Wyman, we’re in a near-future where human police officers have android partners. Karl Urban plays human Detective John Kennex, who has a cybernetic leg and an unusual android partner, a DRN model known as Dorian (Michael Ealy), who is programmed to have emotions and humor. Kennex is at first profoundly annoyed by Dorian, but the man eventually comes to accept Dorian as something more than a machine.

Urban, born in Wellington, New Zealand, has a career that spans mediums, hemispheres and genres. On television, he’s guest-starred on HERCULES and XENA as Julius Caesar and Cupid. In features, Urban starred in the live-action folk tale THE PRICE OF MILK and then began his tour of duty in hit film franchises, playing Eomer in THE LORD OF THE RINGS: THE TWO TOWERS and THE LORD OF THE RINGS: THE RETURN OF THE KING, Vaako in THE CHRONICLES OF RIDDICK and RIDDICK, Kirill in THE BOURNE SUPREMACY, Leonard “Bones” McCoy in STAR TREK and STAR TREK: INTO DARKNESS and the title role in DREDD.

ALMOST HUMAN is Urban’s first lead in a U.S. TV series. He attends the Q&A session for the show for the Television Critics Association, and later that evening attends a party thrown by Fox for the TCA.

At the Q&A session, Urban in his normal New Zealand accent (different from the American one he employs as Kennex) talks about what makes ALMOST HUMAN stand out from some other science-fiction dramas about where we may be headed.

“I watched a lot of television as a kid. I was always drawn to shows like STAR TREK, which presented a wonderful kind of vision of the future, where it didn’t matter what race or culture or creed you came from, that you were accepted on equal terms and that humanity had overcome the warring and the differences and was now united. And it’s a very positive and optimistic version of the future. And I think that’s why that show was so successful and people were latching onto that. And one of the wonderful things that I think that Joel is doing in ALMOST HUMAN is, we’re not presenting a dystopian vision of the future. This is a future that is immediately accessible. We’ve still got mortgages. Mom and Dad still take the kids to soccer.

“It’s just that, in this slightly futuristic vision, society is dealing with elements and difficulties that are just a little bit beyond the curve for us, and I find that interesting. And we play characters who are really at the front line of protecting the society against the misapplication of genetics or robotics, or anything like that. And the wonderful thing that I think the show does is, it really questions us. It makes us, as an audience, ask, ‘What does it mean to be human? And if I was in that situation, how would I react?’ I think that’s a key to all good shows. And I think what makes ALMOST HUMAN unique and original is the fact that, if you can see the case on another cop show, we are not going to do it. We are going to show the audience something that they haven’t seen. To me, that’s one of the more interesting and compelling elements of the show. The technology you hear Joel talk about, the research they are doing, this stuff is coming down the pike, and to me, that’s infinitely exciting.”

Later, Urban is at the party at West Hollywood’ rooftop Soho House, where he seems happy to talk further about his foray into playing human/android partnership.

Given that Abrams directed STAR TREK: INTO DARKNESS, which came out earlier this year, did he mention the ALMOST HUMAN project to Urban?

As he learned about the show while it was still in its formative stages, did Urban have any input into Kennex’s character? “You know what? They had a very clear, concise, fully-formed idea of what they wanted to do. And they invited me to be a part of it and I couldn’t be more thrilled.”

Having also played a law enforcement official in DREDD, does Urban feel he’s in any way pioneering the “future cop” genre?

“Dredd had no technical enhancements,” Urban points out. He did have specialized armor, but, “That was just armor. The thing about Dredd was that he was just a man. Kennex has got a robot leg. To a certain extent, I think that we’re treading fresh ground. Our researchers are really looking at what’s just around the corner and incorporating it into our show, so the future technologies that we present in our show are really coming. But at the heart of it, it’s a buddy/buddy show. It’s about two cops that don’t necessarily see eye to eye, but they’re forced to work together.”

How long does it take Kennex to see Dorian as a fellow cop, if indeed he ever does?

“I think he appreciates it pretty early on in the piece,” Urban replies, “because I think that through [Kennex’s] self-loathing and hatred, he sees that, wait a minute, here is a cop who essentially is making him better at his job and is helping him. He’s not stupid. He sees the value of Dorian.”

Kennex tends to sometimes disagree forcefully with Captain Maldonado, played by Lili Taylor, even though the commanding officer clearly has respect and affection for the independent-minded detective. “I don’t necessarily believe that he overrides her,” Urban explains, “but he lets her know morally where he stands, and when she says, ‘I want you back because I can trust you,’ she really means, ‘I can trust your moral opinion and your moral judgment.’ Kennex, for all his faults and for all his abilities to be left-of-field, also has the ability to be very morally centered.”

As Kennex has a prosthetic leg, did Urban do any research into that aspect of the character? “Well, I thought about that, and I thought that the difference between Kennex and, say, people who in the theatre of war have lost a limb is that Kennex wakes up from a coma after two years. They’ve already attached this leg and it’s a robotic leg and when it’s functioning properly, you can’t tell the difference. So really, I didn’t feel that it was necessary to go and talk to people who have been in the theatre of war and experienced that, because their experience would be different. Walking – it’s like having a normal leg. But the problem with Kennex is that he doesn’t look after it, and that’s where the issue lies.”

When THE PRICE OF MILK comes up – Urban plays a New Zealand milk farmer who must retrieve his intended from a tribe of magical beings – the actor exclaims, “Oh, my God! I love that film!”

Urban recalls the beautiful visuals, including a mountainside being wrapped in an ever-lengthening red scarf. Back when he made the film in 2000, did he have any ideas about how his career might go, and if he did, did his thoughts mesh with what’s actually happened for him?

“You know what? I couldn’t be more blessed. I’ve worked with some of the most amazing, talented individuals in this industry, from Peter Jackson to J.J. Abrams to Paul Greengrass, it’s more than I could ever hope for. And now to have the opportunity to work on this show with J.J. Abrams, with Joel Wyman and this extraordinary cast, I cannot tell you how thrilled I am.”