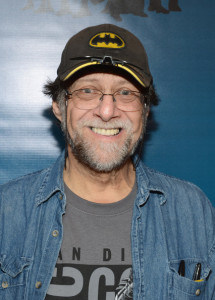 Len Wein is a superhero in the comic book world (as opposed to a comic book superhero). The legendary comics writer and editor co-created DC’s SWAMP THING and Marvel’s WOLVERINE, among many other achievements. It is therefore entirely appropriate that documentary filmmaker Michael Kantor included Wein in the three-hour, three-part SUPERHEROES: A NEVER-ENDING BATTLE, which airs October 15 at 9pm ET on PBS

Kantor says that, with SUPERHEROES, “Our aim is to explore how these characters came into creation and what they reflect about America. We built this series with a broad viewership in mind, from age eight to eighty-eight, both men and women, for both nerds and folks like my parents, who had never heard of THE AVENGERS movie. Our goal was to let the creators of superheroes speak about this history, their work and the work of their colleagues.”

To this end, Wein and Kantor, along with Wein’s fellow comics creators Todd McFarlane (SPAWN and co-founder of Image Comics) and Gerry Conway (MAN-THING, THE PUNISHER and writer of the death of Gwen Stacy in the SPIDER-MAN comics) are all together on a panel at the Television Critics Association press tour to discuss SUPERHEROES. When the panel finishes, Wein makes himself available for some one-on-one additional dialogue. The following is a combination of both the private conversation and Wein’s responses at the panel.

For decades, comic books and their affiliated films and television programs were looked down on as second-class entertainment. Does Wein feel vindicated by the rise of pop culture and the idea that Comic-Con is now one of the most famous and well-attended gatherings on the planet?

“As the guy who coined the phrase ‘Comic-Con’ back in ’64, I feel very much vindicated,” Wein laughs. “I think geeks have inherited the Earth. We won.”

Was there a particular moment when Wein feels like the culture turned around for comic books and their creators? “I think the first time a hundred and fifty thousand people showed up at Comic-Con, it said something about that. You know, there are I don’t know how many cities in this country that didn’t have that many people in them, let alone people who came for one specific event.”

Something that many people wonder is why characters who have superpowers, and therefore presumably don’t need as much physical strength as ordinary citizens, are so often drawn as being hyper-muscular. Some comic book artists say this look is what the readers want. However, Wein opines, “It never crossed my mind to worry about how they were built. Because I always worry about people. My stories are all aimed at telling about the human condition. Look, it kind of disappointed me that Spider-Man became more traditionally super-heroic physically. I always thought that he was a skinny guy – he was a spider. He had those powers because of a spider bite.”

As to character diversity in terms of gender, ethnicity and sexuality, Wein says he thinks it’s great to create diverse characters – so long as that distinction does not overwhelm their role in the story. “I think every time you take a female character, a black character, a Hispanic character, a gay character, and make that the point of the character, you are minimalizing the character. I have written anything you can possibly think of. I have created Storm [the weather-controlling character in X-MEN], who was the first black female superhero. I created a number of other characters – I was writing about who they were as human beings. It wasn’t ‘Black Storm.’ She was Storm.”

How does Wein feel about the way his creation Wolverine looks and acts in the X-MEN and WOLVERINE films? Is Hugh Jackman’s portrayal of the character what Wein had in mind? “Absolutely,” Wein replies. “That’s dead-on. As I said to somebody earlier today, the first time I saw Hugh with his back to you, bare-chested in the iron cage in the very first film, I went, ‘Oh, my God, it’s him.’ He embodies him physically, even though he’s a foot taller, and emotionally exactly as I envisioned him.”

Sometimes fans are vociferously disappointed when film or TV adaptations of their favorite comics are not what they envisioned. Wein muses, “I have written, as has Gerry [Conway], I think, in most of the different mediums. I’ve done animation. I’ve done live-action. I’ve done film. I’ve done videogames. And the first rule I learned and what I try to teach whenever I have to teach a writing class is that you write for the medium that you’re working in. I have adapted a lot of my own work to other mediums, and I make all sorts of changes to the stories to make them better fit the medium I’m now working for. I try to keep the basic heart of the character, the basic things, but I’ll change all sorts of elements. And I have people, dear friends, who yell at me, ‘How can you do that?’ And I say, ‘Well, because what I did here in comics doesn’t really work there in film or on television. You’ve got to be flexible.’ And I think a lot of fans lack that capacity, and it’s sad.”

It seems like every time a studio launches, or re-launches, a comic book film franchise, they revisit the origin story, even though by now it seems unlikely there can be too many souls on Earth who don’t know, for instance, that Superman is from Krypton. Does Wein think this is necessary? “Well,” he replies, “the origin forms who the character is early on. A lot of what they do and why they do it is based on how they became what they became, whether it’s Bruce Wayne’s parents being killed or being the last survivor of your planet. They tend not to redo the origins in the sequels. Every time they reboot the series, they redo the origin, and I think that’s kind of a mistake, especially things like SPIDER-MAN. That’s twice in a little over a decade they have done the origin, and I don’t think you need to do that quite so often. But they are going to reboot BATMAN, and I imagine somewhere in that first movie, there will be his parents getting gunned down by Joe Chill again.”

THE AVENGERS was one of the most financially successful films in any genre in history. Wein thinks having multiple heroes played a part in the movie’s popularity. “There’s something about the team, the group, getting more for your money. You get to sample, in essence, six different series in THE AVENGERS, and if you like them, you can go back and watch the IRON MAN movies or any of the ones that precede it, THOR [and CAPTAIN AMERICA]. When I was a kid, I decided to start reading Edgar Rice Burroughs. I knew he had created TARZAN, and the first book I picked up in that series was TARZAN AT THE EARTH’S CORE, which sort of teamed him up with the hero of Burrough’s other series [PELLUCIDAR]. I got to try two series for the price of one. THE FANTASTIC FOUR did that for me, and THE JUSTICE LEAGUE. You get to try out a whole bunch of different characters for the price of one, and I think there’s that element to it, as well as the fact Joss [Whedon, director/writer of THE AVENGERS] is a terrific storyteller.”

With fare like MARVEL’S AGENTS OF SHIELD and ARROW and THE WALKING DEAD succeeding on television, Wein observes, “I’m still a fanboy. So even after all these decades, I love seeing superhero stuff on TV. I mean, let’s be honest, most of the fanboy geeks, AGENTS OF SHIELD [is] the thing we are most looking forward to this fall, I can’t tell you how much.”

How is Wein compensated when he creates a character like Wolverine, who exists within a larger franchise? “It depends on where I create the character,” Wein explains. “When I work for DV, anything I create, I get a piece of. Lucius Fox, for example, who was in the last trilogy of BATMAN movies, played by Morgan Freeman, bought my new house. The stuff at Marvel, I did see a check off the current WOLVERINE film, but as a rule, I don’t see any of the ancillary money off of all the toys and soaps and shampoos and skateboards and God knows what else that features the character. Basically [creating Wolverine] pays my page rate, initially. The industry has changed over the years. When we all started, nobody got a piece of the action. As some of the fans took over the industry, Paul Levitz in particular at DC Comics went out of his way to make sure everybody was properly recompensed for the work they had done over the years, going back as far as he could where there was legitimate documentation of who had done what so that people were appropriately paid.”

Wein has many famous successes, but did he create any comic books that didn’t do as well? “I did a book for Marvel called BROTHER VOODOO. I know it’s not the best name ever, but it was a book I actually really enjoyed writing. I had fun writing it, and it had terrific art by Gene Colan and Dick Giordano and various folks. All of them sadly are gone now. And it lasted six issues, so you can’t win them all.”

Disney of course is famous for its animated features, but Wein was there when they began to also publish comic books. “When I became editor-in-chief of Disney comics, it was the first time Disney had ever published their own books. They always licensed the characters in the past, and we tried very hard to go back to the early days of what the comics had been. I added the word ‘Adventures’ in most of the titles. MICKEY MOUSE became MICKEY MOUSE ADVENTURES. DONALD DUCK ADVENTURES – most of those titles got changed. And I think that what we produced was very close to the heart and soul of the original characters. If you think about Mickey Mouse, everyone thinks of him as little squeaky friendly Mickey, but he used to be the Indiana Jones of his time. He was an adventurer as a character, and I think there’s a lot of that that has gotten lost in the corporate face of these characters over the years.”

“This is from a guy wearing a Mickey Mouse watch, by the way,” Kantor interjects.

What is Wein working on right now? “Well, I’ve just finished another [script for] BEN 10, the animated series. I’ve done eight of them so far.”

Ever since the dawn of comic books, there has been a debate about whether and how much they influence young minds. Does Wein take children into account when he creates? “I was one of those impressionable little minds when I started out. So I have always written for that kid. There was a wonderful line in LI’L ABNER which says, ‘Good is better than evil because it’s nicer,’ and that’s sort of my mantra when I’m writing. I always try to keep a moral lesson in there that tells you to do the right thing. My own moral code is pretty much born by comic books. That makes me sound extraordinarily geeky, but it’s something I always keep in mind when I work.”

Abbie Bernstein is an entertainment journalist, fiction author and filmmaker.