Horror novel about Joey Peacock, a vampire who has inhabited and fed on New York City for 40 years. 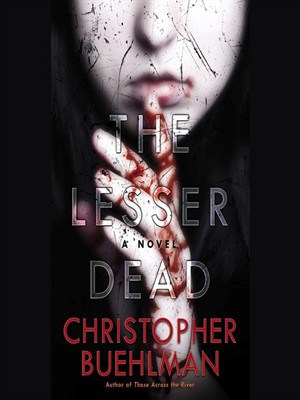 The Lesser Dead by Christopher Buehlman

I read most of Christopher Buehlman’s new novel The Lesser Dead lounging in bed before going to sleep. That turned out to be handy because, had I been wearing socks, this bad ass book would have knocked them right off. This is one of the three best horror novels I’ve read this year even though it’s about vampires. Vampires, as a subject, are tired. Exhausted. They’ve been pulled in hundreds of different directions in feeble efforts to make them new and exciting. Frankly, after the wave of shimmery, vaguely vicious, pretty boy, vamp romance swept into dark literature, I damn near checked out. Couple that with the overabundance of “horror” novels about paranormal vampire hunters and half-vampires who hunt (and quite often sleep with) other vampires, and I’m just generally nauseated by the whole category these days.

And then The Lesser Dead detonated right in the middle of this worn out landscape and tore everything to shreds, including my expectations. This book flat out rocks. Set in1978 New York City, it drips with greasy venom, grunge, and Manhattan nightlife. The narrator, Joey Peacock, has been a vamp for forty years. Despite being a fully-grown mental vampire, physically he’s confined to the body of a small, fourteen-year-old boy. He alternates between playing up the lost little kid angle to draw in
victims, and trolling NYC’s pulsing discos and punk rock clubs for the most beautiful and ragged humans available.

Joey has no illusions about what he is or what he does. He’s up front with the reader from the very first page: “If you’re looking for a story about nice people doing nice things, this isn’t for you. You will be burdened by an unreliable narrator who will disappoint and repel you at every turn.

He’s gleeful about being a monster, but not in a particularly dark, sinister fashion. He’s not all gothic and Anne Rice: seductive, evil, and elegant. Joey is savage in a thoughtless, practical, this-is-just-how-it-is sort of way. He reveals his myriad vampire powers casually, with no fanfare and little explanation. Joey does not live an examined unlife; he loves being a monster the way a dog loves being a dog.

He’s part of a fang gang that lives in the mostly abandoned subway tunnels under New York. When new vampires start stalking their turf, they know they have to put a stop that or lose their happy hunting ground.

But these new vamps aren’t like Joey and his crew. They’re young children, barely more than toddlers, and they seem to have powers and cruelty no one has ever seen before. Joey and his pals, comfortably atop the undead food chain, are now threatened by a bantam bloodsucker apocalypse.

This book is gloriously gritty. I could feel 70s Manhattan getting under my fingernails with every page. The atmosphere is locked in from the first sentence and Buehlman never lets up. He drew me in effortlessly and I felt like I was a part of this creepy little world. Joey is a sneaky, arrogant little bastard in a city full of distracted, drugged-out meat just begging to be bitten. He’s the definition of capricious and Buehlman lets the story jump around in accordance with Joey’s disjointed mentality.

The Lesser Dead blows away the competition. It’s a snarling, nasty masterpiece and it made me feel funny in all the right ways. Christopher Buehlman has created something extremely rare and beautiful in a market glutted with the dried blood of longtime failure: a vampire novel that matters.

Joey Peacock, a vampire in 1978 New York City, has his routine of sleeping all day and hunting, womanizing and attending punk rock shows by night interrupted by child-like vampires of a different breed, who pose a threat to Joey and all of those like him. By the author of Those Across the River. Includes teaser. Reading group guide online. 40,000 first printing.