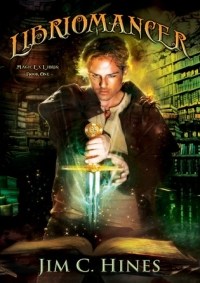 On April Fool’s Day last year (really!) I ordered a book from Lulu.com called Goblin Tales. A few days later it duly arrived in my post office box, and I devoured it. The first four stories in the collection answer some questions from Jim Hines’s Goblin Quest series. The last story, “Mightier Than the Sword,” introduces the concept of libriomancy . . . and I’ve been eagerly waiting for this book ever since.

is the first book in the new Magic Ex Libris series, literally Magic out of Books. A lot of thought went into defining the magic system at the heart of the series–its beginnings, its limitations, its costs–that work shows. The result makes for a remarkable read. It gives Hines the opportunity to showcase favorite details of fantasy and science fiction novels, both contemporary and classics, and through protagonist Isaac Vainio, his love of genre fiction shines through. Horror, mystery, biography, and nonfiction books all play a part as well. When Isaac talks about a book I’m familiar with–the memory made me smile and enjoy reading about it all the more. If I hadn’t read the book, often I ended up adding it to my list (there’s a bibliography included at the end, which helpfully marks which books don’t actually exist).


The characters are interesting, well-developed, internally consistent, and most important, fun to read about. All of them are complex, with motivations that make sense–once they come to light. Silly at times, dryads interact with historical figures, a redneck vampire pets a beagle, or a librarian is . . . a librarian. The relationships between people are tangled up and messy, like real life.

Most of the book takes place in Michigan’s Upper Peninsula, and the various locations act almost like additional characters, exuding their own personality into the story. The nature of libriomancy requires locations full of books: libraries, bookstores (both new and used), archives, people’s homes–each of these is imbued with its own unique personality.

Once the book gets going, it moves along at rocket speed, with events happening left, right, up, down, and sideways. As soon as you think you have it figured out, another curveball comes your way, driving the plot in a completely different direction.

The joy Isaac takes in magic, and the interesting places it takes him as he puzzles out the way things work are among the best parts of the book. The mystery of who is behind what is going on and why they are doing it could only be solved . . . by a librarian. Obviously.

I’m a fan of both Jim Hines’s Goblin Quest series and his Princess series, but I think he’s reached another level entirely with Libriomancer. He keeps getting better. I’ve already started the countdown for the next one–I can’t wait to see what happens next. Recommended to anyone who likes books and reading.

Gifted with the ability to draw objects out of books, Isacc Vainio, a Libriomancer, seeks assistance from a Harley-riding dryad after a number of vampire attacks are reported by other members of his secret, magic organization.