JMW: Hello. This is Jean Marie Ward for BuzzyMag.com. With me today is author and agent Lucienne Diver. Welcome, Lucienne.

JMW: Congratulations on the release of your latest volume in the Latter Day Olympians series, “Rise of the Blood.” I’ve always been fascinated by this series and your use of Greek mythology. But I have to ask one thing: what made you think that Gorgons had gotten a bad rep?

And of course Medusa was horribly, horribly maligned in mythology. She was a priestess of Athena, the story goes, and they were supposed to remain chaste and dedicated to wisdom and all of that. And Poseidon became obsessed with her, and sadly forced himself upon her. And Athena, in retaliation for Medusa breaking her vows and no longer being chaste, turned her into a monster. And this was very much blaming the victim to me, and it was always a horrible, horrifying story to me, and always put Athena — not to mention Poseidon — in a very poor light.

So I wanted Gorgons to be able to regain their power. And so my heroine is part Gorgon, and she’s a very strong woman even from the very first book. But she just becomes stronger and stronger as the series goes on. And in the beginning of the series, she hasn’t quite accepted her family heritage. The story goes that the god Pan beer goggled one of the Gorgons, and that’s how her family line began. But this seems very unrealistic, as you can expect, until she witnesses a murder by something that looks like the Creature from the Black Lagoon, and she starts to think maybe there’s something behind all of these tales.

And I had a lot of fun playing with it, and modernizing the Greek gods. Having lost a lot of their worship, they’ve lost a lot of their power, and they’ve had to get day jobs. For instance, Hephaestus is the new Wunderkind for ILM, Aphrodite’s the new Mayflower Madam, Apollo is an adult film star who transitioned into mainstream film and is now going into management. So I just had really a lot of fun.

JMW: Which won’t be for a long time. Unless you decide to take after the second series you worked on for a long time, though I understand it’s come to an end. The Vamped series.

JMW: Which has been described as “Clueless” meets “Buffy the Vampire Slayer.” They seem to be very, very different, though joined by your own sense of humor. How hard was it to switch between the two series?

Lucienne Diver: Well, it wasn’t really that difficult at all. Both of the heroines are kind of snarky powerful females. It’s something that I really like. But they’re very, very different characters. Gina is a 17-year-old fashionista turned vampire, and Tori Korakis, my main character from the Latter Day Olympians series, she wouldn’t know fashion if it bit her on the ass. And she would bite back in a second.

So really, it’s both first-person female narratives, but they’re very, very different characters. Gina knows exactly who she is, and Tori’s still getting a sense of who she is and where she comes from. And it’s odd, because Tori is kind of older. But I guess in both, there’s a sort of exploration of identity. And Tori is accepting her family history.

And in the Vamped series, it’s very much Gina knew who she was. She was 17 years old, she was top of the social pecking order, and then I ripped the rug out from under her, because I kill her. She does not survive her senior prom. She wakes up three days later, has to claw her own way out of the grave, totally ruining her manicure. And her social status is gone. She’s dead. They know she’s dead. Her classmates came to her funeral. And she has to rebuild herself.

So they’re very, very different characters, but I have so much fun playing with both of them.

JMW: Great. And I know your readers do, too, and they’re sorry to see Gina go. But I’ve got another question to ask you about your writing life.

JMW: Who is this Kit Daniels, and what’s she doing on your website?

Lucienne Diver: My very first novel ever, it was a romantic comedy called “Playing Nice,” and I wrote it as Kit Daniels because when I first started out, I didn’t want any of my authors . . . I’m an agent, as well, and I didn’t want any of my authors, or anyone else, to think that I was any less committed to agenting. Because I love agenting, and I love my authors. And I should be committed, probably, because having a writing career and being an agent and everything else all at once is like living a double life, and having two lives, and being two people.

And that’s what I tried to do at first. I tried to keep them very separate, even to the point of not letting people know who I was. Not letting editors know or readers know. And I found that it was very hard to promote a book when you’re trying to be somebody else, especially when you’re working so hard to keep it a secret. And I didn’t want to be, say, on authors’ boards, and have it discovered that I was Lucienne Diver, and have anybody think, “Oh, an agent has learned our secrets, or heard conversation that really wasn’t meant for her ears.” Because that wasn’t what I was trying to do. I just wanted the anonymity so that I got everywhere on my own merits, and nobody thought otherwise, and nobody thought I was taking time away from my agenting career, which I don’t do.

And it just didn’t really work out that well. I found it was very difficult for me to lead a double life, and not at all me. I’m very much who I am, and I like to be very upfront. And so when I got an agent for the Vamped series, she convinced me to write under my own name. And it turned out to be a very good thing.

And I actually probably will go back to using a pseudonym at a certain point, because what I’ve been doing so far is paranormal, very funny, and yet suspenseful at the same time. But I am actually working on a project that has no paranormal and very little humor. It’s very dark and suspenseful and angsty, and kind of a book of my heart. And for that, I will probably use a pseudonym again. But I don’t know how big a secret it will be.

JMW: Yeah. So you can sort of rebrand yourself.

Lucienne Diver: Yeah. I have a very, very hard time reading about things happening to children, particularly trauma. And that is someplace that I thought that I’d never go. And in a way, I won’t. I’ll never kill children in a book. I just can’t do it. I mean, in the Vamped series, they came back from the dead, they became vampires, the teenager that unfortunately didn’t survive something or other. But I think that’s something I know I have difficulty reading about. I know I would have a lot of difficulty writing about.

And so I don’t know that there’s anything that I wouldn’t ever. I thought there wasn’t, but apparently I was wrong.

JMW: You know you’re not imagining things. Yes, there was a break in the filming. We are filming at Dragon Con, and that means interesting things are happening, as you can hear. But Lucienne’s still here. And the question that I want to ask you now is you’ve seen more manuscripts and more books than most librarians at the Library of Congress. In all of your years, what is the most important writing lesson you’ve learned from your experiences as an agent?

Lucienne Diver: Well,{inaudible) is one of my authors that I have worked with since very early on in my career, since the very beginning of her career. And I have learned a lot from her, both as a writer and as a friend. And one of the most important things that I’ve learned was from her, which was really the devil is in the details.

But not just the devil is in the details. The reality is in the details, and what makes a world and a situation and a character really tangible and believable to people is the details. Not just that there are magazines on the table, but what the magazines are, what condition are they in, are they spread out, are they folded up, are there wrappers amongst the magazines. I mean, these kind of details are what really sets a scene and what really matters. What really makes it go from a cardboard cutout or a scene that you’re watching to a scene where you’re sitting on the couch with your feet up on those magazines.

And I think the second most important piece of advice that I ever got was from my first editor, who said, “You know, you can swim down.” Because I was writing for young adults, because I was so interested in getting to the really important stuff. The really good stuff. Sometimes I would still forget those details, or forget to slow down enough to really ground people in what was going on. And for my editor to say, “Trust yourself. You are interesting enough. They’ll follow you if you take a second to breathe.” That is just a really valuable piece of advice that I would love to pass on, as well. Be able to take a minute to breathe. And the breathing is what makes the scene really there.

JMW: Great. I know that a lot of readers and writers will be really interested in that piece of advice.

Before we leave, I do want to ask you if you can give our viewers a sneak peak of what you’re working on now.

Lucienne Diver: Well, there are two things, really. One is the fourth Latter Day Olympians book, which will be called “Battle for the Blood.” And I’m hard at work on that one. And that takes my characters to New York City, and that’s about all I’ll say on that, because I don’t want to spoil anything for anybody. But I love the series, and I hope you’ll all go out and read it so that I’ll keep on writing it.

And the other thing is that sort of super secret project that I’ve just been talking to my agent. It is dark and suspenseful and angsty and young adult, and not in my normal thing. There is a little bit of humor, but it really is not about humor. It’s really about the darkness of the situation, and dealing with it. And I think it’s powerful. I hope it’s powerful. I guess we’ll find out.

JMW: We certainly will. Is there anything you’d like to add?

Lucienne Diver: No. Just thank you so much for having me.

JMW: And thank you for joining us here at BuzzyMag.com. 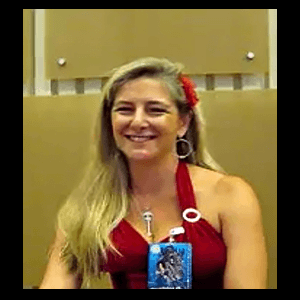 Add her to your
Google Plus Circles