Manifestations is the second installment in the Pierre Jnr Triology 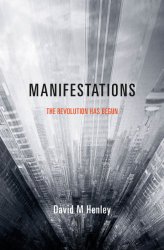 Manifestations Review. Citizens of the World Union are linked together by the Weave (a more evolved form of the internet), and through it make known the Will of the people, which is at once enacted and embodied by the Prime and the council of the Primacy… so long as these political socialites maintain active public profiles and don’t lose the popular support they’ve garnered. Racked by xenophobia and feeling itself threatened by the marginalized psis (people with psionic powers), the WU already has begun fraying at the edges. When anarchic psi-child Pierre Jnr reappears and a failed digitalis experiment breaks free, overwhelming the city of Busan and its four million inhabitants, the precarious balance of the Will is exposed; as disaster follows upon disaster, what can stop the entire Weave from coming unraveled?

Although Manifestations is the second book of a trilogy, knowledge of the first is by no means a prerequisite. David M Henley is not of the patronizing hordes who nowadays ride roughshod across the publishing landscape, wantonly explicating in the third person or, equally barbarous, offering up characters whose speech and actions are mushed up and spoon-fed for benefit of readers lacking the wherewithal to extrapolate for themselves; yet, nor is his writing obtuse (either deliberately or through neglect). Instead, Henley immerses us in his story and trusts that our very presence there will bring about the necessary measure of understanding. Aiding us in this orientation, perhaps counterintuitively, he applies the same naturalistic treatment to both minor and major characters, scattering vignettes amongst the main plot points and never signposting which of these are to prove central and which peripheral to the storyline. It is an approach that science fiction has been calling out for, and one that Henley takes to with considerable aplomb. The resulting journey is both intriguing and compelling: from the prelude onwards, we are no mere witnesses to a tale already told; we are inside Henley’s disquieting vision, looking for a way out.

Several dark ripples spread across the surface of Manifestations — the unleashing of a laboratory experiment gone monstrously wrong; the oppression and reactionary rise of ever-more-powerful telepaths and telekinetics — but if one were to look for significance in the title of Henley’s second (mainstream) novel then it is not such overt dangers that become manifest, but rather the more insidious threat posed by and of society itself: not a dystopia, as such, but an edgy extrapolation whereby today’s ideals of freedom and democracy have interbred with increasingly pervasive social media to create a genuine rule of the many. Finally, humanity is seen to attain what heretofore it could only aspire to as a theoretical paradigm, yet in practical application Henley allows us a glimpse of how the parliamentary decision-making process would suffer without an oligarchic filter through which to temper the fickle collective drive of a population weaned on superficiality and instant gratification. Manifestation is not just a grim depiction of what our future might look like; it’s so natural (if dire) a progression that, once pointed out, it becomes hard to envisage a different scenario. And if the catalyzing elements of disaster (synthesized intelligence, psychic powers) may be thought to lie beyond the remit of science, nevertheless they fall well within the purview of allegory. Henley shows us the now in tomorrow, and as bad as that future looks, the society we fashion today is trending more and more as the reprehensible forerunner that all so blindly shall follow.

Manifestation follows on from last year’s The Hunt For Pierre Jnr and in 2015 will give rise to Convergence. Such is the Will.

The Weave is left reeling after an explosion devastates the city of Busan. Who is behind it? What does it mean for the psis? Pete Lazarus has been taken captive and Colonel Pinter is discovering the joys of rejuvenation, while the most powerful telepath ever born marches steadily towards world domination, collecting subservient Citizens in his wake.