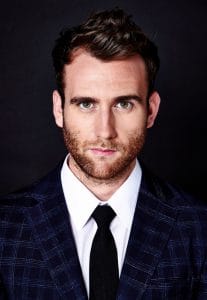 When actor Matthew Lewis was six years old in 1995, he had his first film role in SOME KIND OF LIFE, written by Kay Mellor. More recently, Lewis was a series regular in THE SYNDICATE, created by Mellor. Flash forward to the present, and Lewis is co-starring in the six-episode ITV British drama GIRLFRIENDS, also written by Mellor and now available in the U.S. on the Acorn.tv streaming service. Lewis, who is originally from Yorkshire in England, has a number of other credits that Anglophiles may know, including series regular gigs on BLUESTONE 42, HAPPY VALLEY and RIPPER STREET. Then of course there’s the role that nearly everybody knows but might not recognize Lewis from these days: he played the loyal Neville Longbottom in all of the HARRY POTTER films.

GIRLFRIENDS examines the lives of three female friends played by Zoe Wanamaker, Miranda Richardson and Phyllis Logan. Lewis plays Tom, the son of Wanamaker’s Gail. Tom has been in prison, but he and Gail are saying he’s been in Thailand. This lie does not sit well with Tom’s girlfriend Ruby, who has been raising their child by herself.

Lewis says of his character, “Tom is a good person. He’s got a good soul, as it were, but he is someone who has been wrapped in cotton wool by his mother. He’s an only child, and she dotes on him and she puts him first at all times. And he has grown up into someone who is very entitles and he, as often children do, sons and daughters, we often forget that our role models in life, our parents, our teachers, have their own lives. It’s not just all about us. I often think about that. When I was younger, and I still do now, I often forget my parents have their own needs and wants and dreams and stuff for their own life that I have to remember, and Tom forgets that frequently. And I think that he’s someone who lacks maturity and responsibility because there’s always been someone there for him to fall back on, his mother, whether it’s with his son or gets in trouble with money or with the law, his mother’s always been there as a safety blanket and as a safety net. And he has a lot of growing up to do in the series. But I don’t think it comes from any true malice or that he’s actually even from the wrong side of the tracks. He’s just immature and childish and he needs to grow up. And I think his time inside has done that a little, but he’s still got a little bit further to go as we see his journey throughout the series.”

Tom telling his girlfriend he abruptly left her to spend time in Southeast Asia seems a little extreme. Is the stigma of going to prison for petty crime much worse in the world of GIRLFRIENDS than it is in most real places? “No,” Lewis replies. “I’m not sure if it would be worse at all. I think that the issue with the reason that Tom was trying to hide it is because it’s to save his mother’s feelings, for a start. Because he loves his mum. As much as he walks all over her and all this kind of thing, he’s very much a mother’s boy, he adores his mother, and it was her that was going to be hurt if people knew that he’d been to prison. It was her that felt responsible for it. And so the reason that he was hiding it I think was on behalf of his mother, actually, more than anything. I think that Tom, as much as he’s ashamed of going there as well, he went there because he was trying to raise money for his family, for his son, and I think that he would hold his head high and say, “Yeah, okay, I did that, it was a bad choice, but I made the right call there. I was trying to help out my son.” And so I think in truth the only reason he was trying to hide it is not for himself, I think that he was worried about how that would reflect on his mother.”

How was playing opposite Daisy Head, especially with her father, Anthony Stewart Head, also in the GIRLFRIENDS cast? “It was great,” Lewis says. “I never actually had any scenes with Anthony, but we’d met previously before. Lovely man. And it was just a real pleasure. Everyone on the show was fantastic. It was one of the most relaxed, enjoyable environments I’ve been on in a long time, and I’ve been very fortunate. All my filming experiences have been tremendous, but there was something about the people involved, whether it was Daisy or Chris [Fountain] or Phyllis, it was a really friendly, fun environment. And every day, you got onto set and you wanted to be there, to be with those other people. It was a pleasure.”


Does Lewis have a preference between comedy or drama, film or television? “Honestly, I’m not sure I do have a preference,” Lewis responds. “The only reason that I would suggest I even have a preference at all would be through having done a lot of one thing and I’d like to try something different. I enjoy them all equally for very different reasons, and I did a lot of comedy a few years ago, and then in the last couple of years, I’ve been doing a lot of drama, with RIPPER STREET and HAPPY VALLEY, and so when this opportunity came up, I’d worked with Kay Mellor twice before, and Zoe and Miranda, and hadn’t had the pleasure of working with Phyllis yet, and so when this came up, it just seemed like a no-brainer to me to go back and do some comedy, but also, it’s not pure comedy. It’s that wonderful thing that Kay does where she balances both the drama and the comedy so, so well, and you get to take this whole roller-coaster throughout the series, and you don’t know what you’re going to end up doing on each day. And that’s the excitement I enjoy. I like that variation of things that you’re able to do. So that attracts me to it.”

Lewis relates that having done the HARRY POTTER films during his formative years did not unduly affect his expectations about how his career would go. “I was fortunate enough that I’ve been acting since I was five, so I’d done a lot of British television before I got HARRY POTTER. I’d been working for six years before HARRY POTTER, working with Kay Mellor and various other TV personnel. And so I kind of was aware of what the industry and the world was like before HARRY POTTER. I never anticipated that POTTER would become the phenomenon that it was on that scale. So every time there was a new film, I took everything with a pinch of salt, really. And it ended up be

coming the global monster that it did, but that was never anticipated for me. My parents and my background in the industry had kept my feet firmly on the ground, so I was prepared when I’d finished that those dizzying heights were not going to be attained easily, or even ever again. I mean, whether there will ever be anything again like HARRY POTTER, I’m not sure.

“I actually felt very much coming out of HARRY POTTER that I had to start on the bottom rung again, because everything I did as a child was one thing, and I started HARRY POTTER at eleven, but I was coming out at twenty-one. POTTER was meaningless to me on my CV [resume] and to casting directors and other people. It was a thing that I was lucky to be in as a child, but now I’m a grown-up, I’m a man, and I have to learn, the same as everyone else. I have to start from the beginning and hone my craft and all that, and HARRY POTTER would get me only so far. And so I knew that very early on and strived to do that, really, to learn and to do different schools, to go do some theatre – I’ve done three or four plays now, and TV and film. So I feel very fortunate that I’ve been given the opportunities to learn and really get a real breadth of experience, which I’m still doing now. I’m still trying to work with people like Phyllis and Miranda and Zoe, and just trying to pick up as much as I can.”

Speaking with Lewis, one notices a tattoo on his right forearm with the Roman numerals XI, but should it perhaps be read as IX? “That’s an eleven,” Lewis explains. “That’s a lucky number, I guess. I’m not really superstitious, to be honest with you, I don’t believe in all that kind of stuff, but I was eighteen, I wanted to get a tattoo, and eleven is a number that I guess I would pick if I had to pick a number, but that’s about it.”

Lewis says that he’s spent the 2017-2018 winter holidays taking it easy. “I finished GIRLFRIENDS and I’ve been having time off. I was on a bit of a diet and whatnot for GIRLFRIENDS, trying to get in a bit of shape. So I’ve let that go, which is nice, and just been relaxing for the whole holiday period. So now I’m going to get my head back on and start working again.”

And what would Lewis most like people to know about GIRLFRIENDS? “The talking points that everybody’s already mentioning is how it’s about three women of a certain age, but what I think is so interesting is that it’s what Kay Mellor does so well. It’s the dizzying heights of the comedy and the crushing battering ram of drama that comes seemingly out of nowhere, and because the comedy is so amusing, it means the drama is heightened and is ten times more powerful. And you will take that, you will ride that roller-coaster with the three women all the way and you’ll have a bloody good time.” 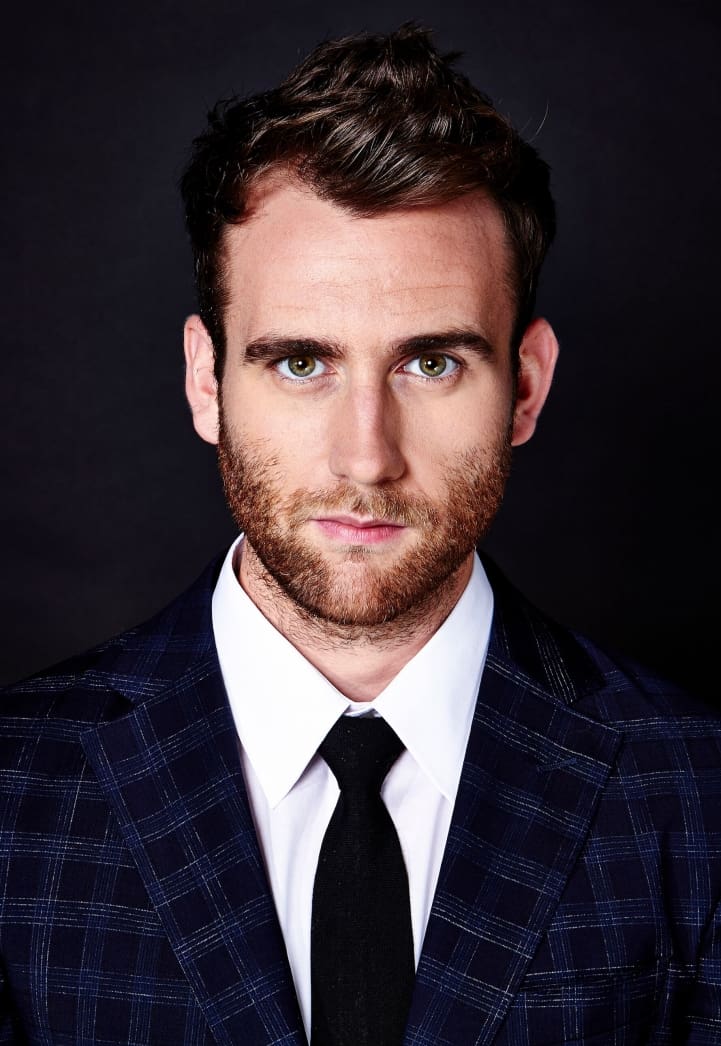