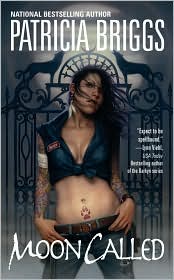 So what’s the deal with the Mercy Thompson novels? What’s so special about yet another *groan* heroine living  among the creatures of the night? Initially, when you look at the cover of these novels, they’re often what many have come to expect from urban fantasy and paranormal romances. Depending on which cover you happen upon it may be a naïve-looking waif of a girl, her hips thrust forward slightly and with some kind of paw print tattoo on her stomach (Moon Called) In another you might see a heavily tattooed, no-nonsense badass, her figure bathed in the light of the moon. The woman on this cover is holding a wrench in her hands and gives the impression of controlled stillness. She almost appears to be silently daring something to attack her, waiting in anticipation to clobber anything that gets too close (Bone Crossed.) So which is it? The naïve, wide-eyed waif, those eyes of hers finally opened to the supernatural world around her or the badass chick waving around automotive repair tools?

Well, in >Moon Called, the first of the Mercy Thompson novels, it’s neither. Instead, we are introduced to Mercedes “Mercy” Thompson – a mechanic by trade who is anything but a naïve waif. Nor is she some kind of badass ready to sock it to anyone that crosses her.
>Nor is she the tough-as-nails badass with the killer instincts and the abs and attitude to match. For all her strength, which comes from working with engines and heavy repair kits and not some inherited super-power, she’s oddly humble. From the beginning of the book, she’s living her life and working on cars. She has lived around werewolves her entire life, but she’s not necessarily part of their world. She chooses instead to keep her head down and nose to the ground. She’s a passive and pretty low-key personality. She’s like this not because she’s weak, but because as in nature, wolves tend to be top dog over the coyote. Mercy knows her limitations, realizes that it’s all a matter of survival, and rolls with it. The werewolves are more in tune with their natural counterpart and tend to be aggressive and short-tempered. As the “coyote” in a wolf pack, she isn’t looking for trouble. The last thing she wants to do is make big waves, nor does her coyote nature make demands for her to do so.Only, trouble finds her.Here is where we find out what separates her from the heroine and the wide-eyed waif. Never make the mistake of thinking she’s weak or can’t defend herself simply because she chooses not to make a splash. Within the first few pages, when danger comes calling, we are shown just what kind of hell this gal can raise. And therein lays the difference

between Mercy and other paranormal badass heroines. She doesn’t make trouble, but she can most certainly finish it. She’s not the stereotypical in-your-face, knee-to-the-groin, gun-toting, pistol-packin’, silver bullet-carryin’, stake-through-your-heart, Buffy-fied type of urban fantasy heroine at all. She doesn’t boast of her mad shape-changing coyote skills to the reader; she doesn’t make a show of acting tough. She simply is. She is strong and capable and intelligent. She’s been to college and to my utter delight, her major wasn’t Sex Ed 101.

While there was the possibility of romance on the horizon, the book wasn’t chock-full of supposedly “sexy” dialogue and awkward dirty-talk between her and her would-be suitors. Nor does Mercy lose her mind and melt into a puddle of sensual and pulsating goo over the thought of two men (who happen to be alpha werewolves) fighting over her. Laurell K. Hamilton’s creation she is not. Instead, Mercy recognizes what those two yahoos are up to, and the fact that they are circling her like she’s the last happy meal on the planet and are getting ready for a battle royale in the back of her van. She then rolls her eyes, slams the brakes on her ride, pulls over to the side of the road and drags one of the big bad wolves out of the vehicle to give him a stern lecture on responsibility and manners. She’s obviously not that kind of girl. Go, Mercy, go! Rock on with your bad coyote self!

Moon Called is part urban fantasy, mystery, and action-adventure with a bit of supernatural politics thrown into the mix for good measure. If you look carefully, there is even a little romance. Although I’m happy to report that I didn’t go into any kind of diabetic coma after reading it. Blink and you just might miss it entirely, which is just the way I like it: Simple, subtle, and just visible enough to pique my interest, but not so much as to be overwhelmed by it. It has just the right mix of myth and legend grounded into normal, everyday reality that makes it a believable world of moonlight and magic.

Patricia Briggs brings to the table an extraordinary character in Mercy Thompson. Briggs even arms Mercy with a simple, yet humble necklace that I, myself, have never seen used in fiction to ward off vampires before, but it works incredibility well, both in its logic and actual use. She’s level-headed, calm, and exudes a quiet faith that I find entirely refreshing. This heroine is likeable and has the ability to share the spotlight with other characters in her world instead of keeping all the
glory for herself. Mercy shares the lime-light with grace and is the kind of character I hope to see more of in this genre. Wise-cracking, no-nonsense types are great up to a point, but there also needs to be a little depth to go along with all that wit and ass-kicking if the author wants their protagonist to be appealing. Briggs delivers just that in spades. We definitely need more characters like Mercy.