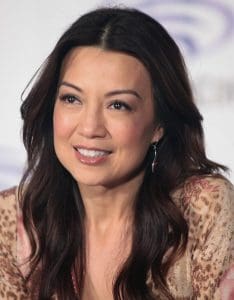 On MARVEL’S AGENTS OF SHIELD, now on Friday nights in its fifth season on ABC, our heroes have just returned from a dystopian future, but who knows what’s in store for them in the present?

The actors aren’t allowed to spoil anything that’s coming up, but Ming-Na Wen is perfectly happy to talk about everything that’s happened so far with her character, the steely Melinda May. Wen has at this point played a whole host of iterations of May: the tough, dedicated agent we met at the beginning of Season 1, who hated being nicknamed “the Cavalry”; the much lighter May seen in flashbacks, before she acquired the nickname (in saving her team by killing a hostile super-powered child); the May who’s in love with her psychiatrist husband Andrew Garner (Blair Underwood); the May who is pulling away from Andrew; the May who, divorced from Andrew, discovers that he has an Inhuman alter-ego that kills other Inhumans; the copy of May who at first doesn’t know she’s a Life Model Decoy, aka an LMD or an android; the May who doesn’t realize that her consciousness has been placed in an artificial reality Framework where she’s an operative of a fascist state … How many iterations of May have there actually been?

“Many, many versions,” Wen replies at a party thrown by ABC for the Television Critics Association (TCA) press tour. “I would like to say maybe about ten, of which I still just get one paycheck.” She laughs. “Just kidding. It’s a good paycheck. Well worth it.”

Asked if she has a top pick among May’s many identities, Wen responds, “I think one of my favorites is definitely [during Season 4] when she was LMD May, because I got to play sort of this more subtle May that eventually discovers her true feelings. It’s almost like an awakening, and I loved that. That to me was really special, and she got to kiss Coulson [SHIELD’s leader, played by Clark Gregg].”

Among her favorite scenes in terms of stunts, Wen cites, “In Season 3, I enjoyed the time that May spent with Hunter [played by Nick Blood], because that was such an odd combination, and I loved that fight scene in the basement with the three guys, because for me, that was the ultimate in female empowerment. Three guys take a young woman down to the basement thinking that they’re going to have their way with her, and instead she just freaking annihilates them. That was a real human scene. It didn’t have to deal with Inhumans, it just had to deal with true-life situations.”


Playing a formerly married couple turns out to have been a longtime goal of both Wen and Underwood. “Working with my Carnegie Mellon University buddy, Blair Underwood, was an absolute joy, for me and for him,” Wen reports. “We’d never worked together since college, so it was something that we’ve always wanted to do, and never had the opportunity, and it’s so funny, because when we were in college, we used to joke with each other. He’d say, “Yah, Ming, my wife, you’re going to be my wife,” and it was just always joking and having fun. So the fact that I ended up playing his ex-wife on the show was just so perfect.”

What was Wen’s reaction when she saw Underwood in his Inhuman incarnation as the big blue spiny Lash? “Oh, my God. My jaw dropped. I had no idea it was coming at all. When I read the script, my jaw literally dropped. I said, ‘Oh, my goodness’.”

Speaking of reading scripts, how far ahead of time do the AGENTS OF SHIELD actors learn about developments that will affect their characters? “The week before, most likely,” Wen relates. “Any time we learn about anything new in our show, it’s always the week before when we get our script.”

Is that because the writers don’t know themselves, or because they don’t want the actors to over-think it? “They just won’t tell us,” Wen says. “I think it’s just three years of being used to this [secrecy], and it’s worked for three years, and they’re just going to stick with it. We always still try really hard to find out, and they give us nothing. Instead, they just threaten us.”

Going out of Season 3, when Andrew died, and into Season 4, when Coulson was relieved of SHIELD’s command for awhile in favor of not-really-Inhuman Jeffrey Mace (Jason O’Mara), May was pretty upset, Wen recalls. “The way I’ve interpreted it is, she gave her heart and she wanted to fall back in love with Andrew, so much so that she wanted to give up S.H.I.E.L.D. for a more personal life and happiness, and unfortunately, the two worlds collided and she ended up pretty much losing both in many ways. S.H.I.E.L.D. didn’t rebuild the way she was hoping it would, Coulson wasn’t the director anymore and Daisy [the earthquake-causing Inhuman played by Chloe Bennet] was out. I think for May, if anything, she was even more closed. She was even more just task-oriented and unemotional. She was really shut down.”

Does Wen like playing one of the grumpiest women on television? “She’s not grumpy,” Wen counters, “she’s just the task-master. She’s just there to do her job.”

Okay, does Wen like playing one of the toughest women on television? She laughs. “Yeah. She’s tough to play, because she still has all those emotions inside, and I think to constantly hold it in – eventually, it’s going to explode again, for sure. And she’ll kick more ass, I think.”

The first half of AGENTS OF SHIELD’s Season 5 has had aspects of the ALIEN films – extraterrestrial monsters – and also Marvel movies where characters go to other planets and travel through time.

“It has been a very strange BACK TO THE FUTURE meets GUARDIANS OF THE GALAXY meets STAR WARS,” Wen opines. “I loved every aspect of it, because being a sci-fi geek, it’s been so much fun to be out in space and actually fly an alien spaceship.” The spaceship, Wen adds, “is the magic of Mark Kolpack and his vis-effects team.”

What about the monstrous space roaches? “Those are real,” Wen jokes. “We have them on the set. Our studio has a lot of big roaches. We’re just using them.” More seriously, she explains that when the actors are called upon to react to the roaches on set, “We have the craziest green head on a stick, and that’s what we use to act against.”

The interview is paused when ABC president Channing Dungey comes over to converse with Wen. After the two women part company, Wen enthuses of the network’s top executive, “She’s a beautiful young woman, and she’s in a position of power, and she’s a woman of color. It’s all good. I love Channing.”

Wen says that starting Season 5 was a little more difficult for her than previous years, “because I had just had surgery in May. I tore my ACL and my meniscus during a fight scene towards the end of Season 4, and so I had to have surgery, and then I had to go right back to work in two months. So for me, it was just not feeling like I could do my hundred percent, but in the end, everything worked out great. The brace helped.”

However, this doesn’t mean that May is sitting down on the SHIELD job, Wen points out. “I’ve had a lot of huge fight scenes already. That doesn’t stop the writers from wanting to have good action. May always needs to be in the fight scenes.” The brace protects her knee, she adds.

Wen has also written a book that is due out later in the spring. “It’s a lifestyle book on how to stay young, and how to be happy in life, and all the tricks and secrets. It’s called WHENEVER, and it’s just my philosophy and take on what it is to stay young-looking, or be young at heart. It’s so funny – Mike Colter [who plays the title role in MARVEL’S LUKE CAGE], we’d seen each other before at the AVENGERS premiere, and he saw me again, and the first thing he says to me is, ‘You’re looking younger than when I last saw you. How are you doing that?’ That’s the best compliment a guy can give a girl. So in two years, I’ll be younger than I am now,” Wen laughs.

What would Wen most like people to know about AGENTS OF SHIELD going forward? “I just love that not only were we the first Marvel television show to break new ground with [Marvel executive] Jeph Loeb and everybody, but it’s because we’ve evolved so much, and our audience has grown with us, from the eight o’clock time slot where we were more like a family-oriented show, to maintaining it being a family show, but now it can go darker and with more serious subject matter and still relate to our audience. So I’m very proud of that.” 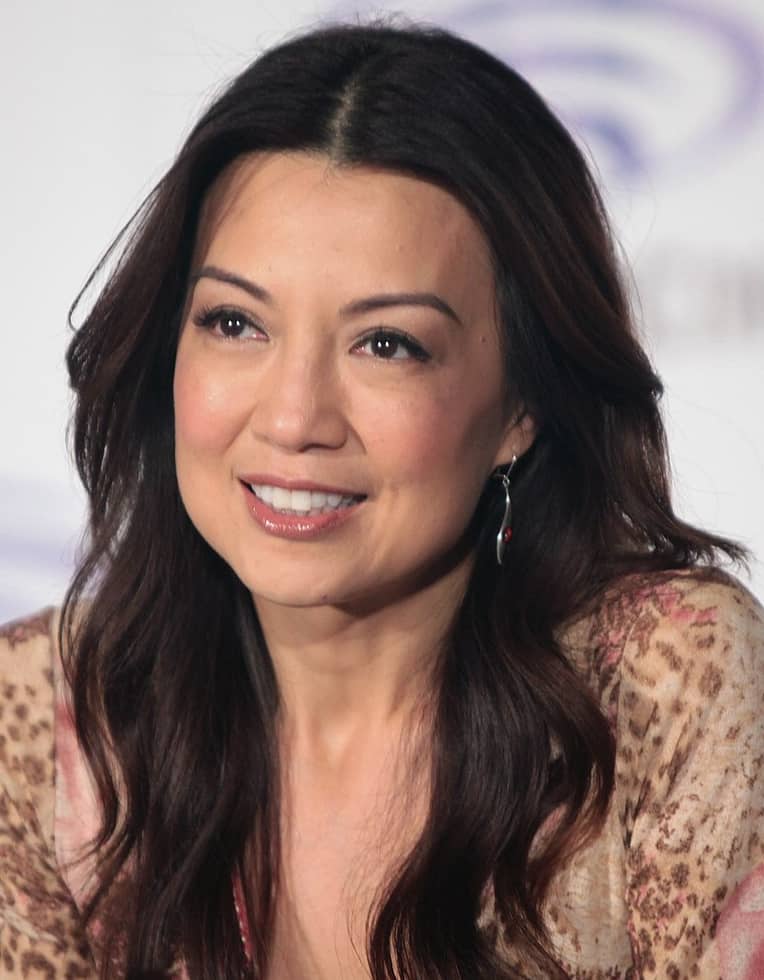 Article Name
Ming-Na Wen On Marvel's Agents Of Shield - Exclusive Interview
Description
The actors aren’t allowed to spoil anything that’s coming up, but Ming-Na Wen is perfectly happy to talk about everything that’s happened so far with her character, the steely Melinda May.
Author
Abbie Bernstein
Buzzy Multimedia