The other day I had lunch with my husband, girlfriends and my dad who was visiting from out of town; during the normal course of girly chit-chatting Alan Rickman’s name came up. Immediately my mind went racing back to the first time I saw him and went a’swooning.

It was in 1995 and the movie was a production of Jane Austin’s Sense and Sensibility, a story I know well and love. Hugh Grant should have been the budding “big name” star in it at the time but it was Rickman’s performance as Colonel Christopher Brandon that stole the show-and my heart. I was so in love. Colonel Brandon was so rough and tumble, dark and domineering, stern and severe-and yet, there was some sort of quiet desperation in Colonel Brandon that called out to me. It didn’t happen in the book, only in the movie. Rickman made the difference. It was amazing to see how strong and utterly weak a man can be at the same time and Rickman pulled it off so masterfully. It was a dreamy flashback, and just about made me faint away in my salad.

My poor dad was dining with us and, bless his heart, asked what movies he would have seen “this Rickman guy” in. A group of giggling women squealed out their favorite movie and about thirty titles hit the table at once: “in Galaxy Quest, he played the actor Alexander Dane who played the character Dr. Lazarus of Tev’Meck, the super smart alien;” “the angel Metatron from Dogma (my husband’s contribution);” “the bad guy from Quigley Down Under, Elliot Marston, the guy who hired Tom Selleck to shoot the aboriginals;” “the bad guy, Hans Gruber, from Die Hard (remember the line “Hans, *booby* I’m your white knight”); “…eew, the creepy pedophile Judge Turpin from Sweeny Todd;” “he was the voice of Marvin the depressed robot in The Hitchhiker’s Guide to the Galaxy;” and my personal favorite (albeit not one that necessarily reflects the views or opinions of Buzzy, BuzzyMag, its other corporations, holding, or affiliates) “…the only memorable character in that terrible movie Robin Hood: Prince of Thieves. He was George, Sheriff of Nottingham. Was that movie supposed to be a comedy?”

Poor Daddy was overwhelmed with our overly enthusiastic fan girl reaction. Even our waiter breezed by the table dropping the quote from Robin Hood on us in his best British accent “That’s it then. Cancel the kitchen scraps for lepers and orphans, no more merciful beheadings, and call off Christmas!” Shaking his head in disbelief, Daddy then asked what would have been a perfectly innocent question if he had asked it of any other person, “what makes this guy so great?”

So I put it to him, plain and simple. “He has a voice so serenely divine that when he speaks, when he sings, when he reads to you the love sonnets of Shakespeare, it feels as if the clouds part as his radiance brighter than that of the sun falls upon you, warming your body to its very core. Then, the cherubim from Heaven above descend, wrapping your body in the warm fuzziest of velvet while coating your soul in smoldering, thick, hot fudge sauce.” Poor Daddy, I think he had the taste of vomit in his mouth but I promise you this: he’ll not ask such silly questions at lunch again.

But it’s all basically true, about Rickman I mean. 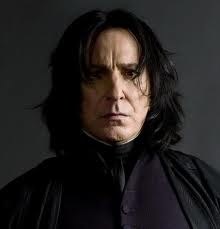 I suppose these days everyone on the planet associate my beloved Alan Rickman as Severus Snape in the much-popularized Harry Potter movie franchise. Naturally, he was brilliant playing the bad boy type I do so love. The character Snape was friendless and socially awkward child who grew up angry and bitter, but not without hope, as he loved Lily Evans from afar. She never returned his affection and eventually married the one person that he simply could not stand – James Potter. But like all bad boys there was a kink in Snapes’s armor, he never abandoned his love for Lilly and after she and James died Snape did his good-guy/bad-guy best as a teacher at Hogwarts to look after their only child, Harry. How can any warm-blooded, heterosexual, American gal not love that type of guy? We know that Snape is damaged goods, small children and animals run from him, flowers wilt in his black clad presence but we can fix him, make him better, love him (and by we I mean me).

I know that in the past I have penned a blog or three on the dreaminess of an actor. There was the one on my imaginary boyfriend Jensen “Dean Winchester” Ackles; my favorite hard drinking, fast driving, rootenest tootenest, meanest gun slinging ghost hunter this side of the Midwest. I wrote another on Hugh “Greg House” Laurie who can play doctor with me any time. Last, but most certainly not least was a few thoughts on Ian “Damon Salvatore” Somerhalder; the moment he walked on screen in “Vampire Diaries” my dad let out a long groan and said “there’s your newest TV boyfriend.” Daddy was right; that is until I got hooked on The Mentalist and Simon “Patrick Jane” Baker (but that’s another mmm… blog for a different time). But with Alan Rickman, it’s different. I mean it; I really do get weak in the knees or as the kids say “warm for his form.”

But there is just something so deep about Alan Sydney Patrick Rickman that I can’t quite place my finger on. He is a wonderful talent, no one can argue that, but there is something more. Maybe it’s in his voice; deep but not too deep; he speaks slowly but holds your attention. There is a passion in every word Rickman says but his delivery is not overbearing, it’s captivating. Maybe it has something to do with his utterly unique accent, raised in west London but with a Welsh father and an Irish mother, their accents certainly must have found their way into his pronunciation. I love that he does not Tweet or Facebook, its adds to the mystery of him. And although there is no Alan Rickman Fan page maintained by the man himself (or his personal assistant), there are lots of devoted fan sites out there, not so you can stalk him or anything illegal like that, but just so you and your fellow Rickmaniacs can know where he is at any given moment of the day. And, if by some fluke, you just happen to find out where he is and what he’s doing, this page would be an excellent place to post his current GPS coordinates, movie and TV appearances.