Moon Called – Book one in the Mercy Thompson Series

Mercy is a mechanic, as well as a shapeshifter. When one of her werewolf friends turns up dead, she has to use her shapeshifting powers to find out who is behind the murder.

Since the “Twilight” series became popular, a spate of novels and books based around vampires, werewolves, and the supernatural have wormed their way into bookstores across the country – not to mention the hearts of teens, tweens and anyone interested in walking on the wild side. Some are sappy romances, others testosterone-laden action fests. Few are worth reading beyond the first page. Few that is, except Patricia Briggs “Moon Called“. 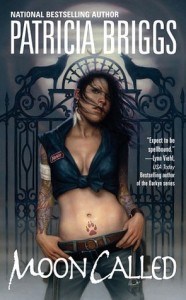 Moon Called is the first in the Mercy Thompson series written by Patricia Briggs. Mercy is a mechanic in Washington State, but also happens to be a Shapeshifter.

” follows a young woman, Mercedes Thompson, as she navigates the tricky and sometimes dangerous world of the paranormal.

By day, the thirtysomething businesswoman and auto mechanic fixes VWs and Jettas for her yuppie clients in the town of Kennewick, near Walla Walla. But there is something many people don’t know about Mercy – like many of her Indian ancestors she is a shifter, a talent which often comes in handy when investigating things that go bump in the night.

When a young man turns up dead on her doorstep and her best friend – a werewolf – is left for dead, Mercy takes it upon herself to find out the truth. What she discovers is a conspiracy so vast, and so disturbing that it threatens to shake her faith in humanity, and many other things besides.

While the first half of the book is slow, owing to the many back stories and origin tales of the lead characters, once the flow of the novel picks up, the story is pretty breezy. Luckily, the pace of the book is overcome by the complexity of the various characters as they clash with each other, creating a compelling narrative that is rich and detailed.

Briggs has created an imaginary world that has as many commonalities, in terms of the conflicts of the various groups and subgroups – with our own as it has differences. At the same time, it is fairly obvious that the author is feeling her way around the new universe she has given birth to, trying to give Mercy, Adam, and Samuel definition and tone – not unlike an artist or a sculptor.

At 288 pages, “Moon Called” is a quick read. But what it makes up for in brevity it delivers in quality. There is little of the literary gimmicks that other authors have resorted to, none of the Hollywood-style panache that has come to dominate the market in recent years. Just compelling narratives and interesting characters. If that doesn’t get anyone through the night, what will?

While it doesn’t have the soap opera quality of more popular novels, the book delivers where it counts. The drama is heart pounding, the suspense nail biting. What more can a sci-fi fan want? If this is an example of what to expect from the author, than it’s definitely worth getting bitten. In the wallet, that is.