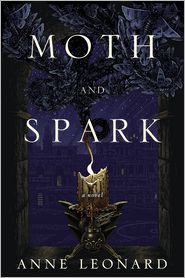 Moth and Spark
by Anne Leonard

Many high fantasy novels contain magic, politics, wizards, romance, spies, dragons and dragon riders but not all are created equal. Moth and Spark is a debut fantasy novel by Ann Leonard that weaves an engaging tale that is both an amazing epic fantasy and a romance. It was a pleasure to find the author does not reveal too much too soon. Instead we are engaged and drawn into the narrative just the way the protagonists are, one reveal at a time.

Central to the story are two people. Prince Corin, heir to the kingdom of Caithen and a much sought after matrimonial prospect. Without his knowledge he was chosen by dragon-kind, known to the dragons themselves as Firekeepers, to be the champion to free them from slavery. From the start I found myself drawn into Corin’s quest. At first Prince Corin may seem like a bit of lightweight but he is intelligent, dedicated and brave with a strong sense of morality. He is accustomed to expect every good thing to be earned, owed or traded for. Even as powerful and handsome as he is, his destiny has been charted out for him.

Tam Warin, a brilliant, modest and sometimes sarcastic young woman who is not a member of the nobility is the other central character of the story. She is the kind of heroine that I love. Not timid but also not too foolhardy. Her honest and sometimes cutting observations of court life doesn’t gain her favor with some, but her kindness does help her to make friends with the more down-to-earth people around her. To me she feels like a cross between Elizabeth and Jane Bennett of Pride and Prejudice. Tam’s father is an outstanding physician and scholar and has taught her the art of medicine. She also has other powers, which at times scare her because she doesn’t understand what they are, and has not one to turn to for help.

Tam’s sister in law, a woman of noble birth, invited her to court but that is not where Corin and Tam first meet. The pair meets by literally running into each other in a library and sparks begin to fly. Though they have chemistry, what draws them together at first is a mystery. Tam is as useful as she is beautiful and once betrayals start surfacing and war is underway, she is invaluable.

The story really heats up when Prince Corin learns that the dragons have not only chosen him but have also given him some of their extraordinary powers to use in freeing their kind. He is not a hurry to do so as it means not only would he have to throw himself but his realm into great danger.

One of the things I always enjoy is a truly dastardly enemy. This world has the Sarians who commit unspeakable atrocities as they stride across the face of the earth attacking and plundering in a manner that would make Attila the Hun’s hoard seem warm and fuzzy. They have the table manners of Vlad the Impaler and the familial devotion of Caligula.

A great deal of time is devoted to description in the first half of the book so unfortunately the climactic end seems a bit rushed. Still very good, but I would have liked a bit more balance. There is also the matter of how the dragons became enslaved in the first place but perhaps that is being reserved for the sequel.

The mystery of why Corin was selected as a champion and what role Tam needs to play gradually unwinds as their world falls apart. For those who love dragons and even for those who are not quite enchanted by the idea of dragons, Moth and Spark presents them in a different light then is usually found in literature. Here they are a sentient race wholly alien yet are at times able to communicate with certain special humans. They are not pets. They are not humans in another form. They are dragons and they are glorious.

I give this novel a solid 8. Most definitely worth reading.

SHOP ON THE AMAZON!

A prince with a quest, a beautiful commoner with mysterious powers, and dragons who demand to be freed—at any cost Filled with the potent mix of the supernatural and romance that made A Discovery of Witches a runaway success, Moth and Spark introduces readers to a vibrant world—and a love story they won’t soon forget.