Be prepared for your venture into the Genre Convention world

A very large number of people who have never attended a Science Fiction and Fantasy convention have the idea that they are all about people standing in line to get autographs of actors while wearing Klingon makeup and costumes or pointed ears.

I’m not saying that those stereotypes don’t exist but the Convention experience is much richer and diverse than you may have been led to believe. To get the best experience it is important first consider your interests and then match them to what conventions are available.

Professional conventions should have actors who have appeared in genre television and films ready to sign autographs and have their photos taken with fans. Some of these conventions include the costs of autographs and photo sessions in the cost of admission others operate in more of an a la carte fashion.

Often genre conventions have previews of new shows and films, and usually an extensive dealer’s room where you can buy anything from jewelry, ornaments, t-shirts and action figures to full scale replicas and costumes…and more. While there are a number of professional promoters the best known and run are Chiller Theatre Expo, Creation Entertainment, Fed Con ( Germany ), Starland and Vulcon. Do expect things to be as advertised and run on time. Do not expect warm and fuzzy.

Warm and fuzzy is more the field of fan run conventions. Fans who get together to run conventions have a great deal of enthusiasm, but usually are run with a volunteer staff and can be a bit “bumpy” with organization of the activities. What you can expect? A movie room, anime room, gaming room, art show, dealer’s room, and various special interest group rooms and tables.

It is a rare con that doesn’t have a dance and a masquerade. Many fan run conventions also have guests ranging from actors, authors, cartoonists, illustrators, scientists etc. You may also find workshops for writing, acting, art, costuming, makeup and special effects. It all varies from convention to convention and year to year. Older fan run conventions such as Aggie Con, Balticon, Bay Con, CONvergence, DragonCon, ICON, Shore Leave, United Fan Con, Toronto Trek to name a few.

The following sections may help you in selecting the kind of convention you would enjoy the most. Don’t be afraid to try other sorts once you’ve sampled those that are in your comfort zone. Exploration can be fun: 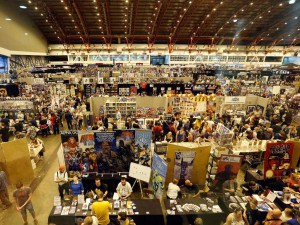 Love to read speculative fiction? Do you have an interest in attending workshops on writing and publishing? Would you like to mingle with like-minded fans and meet professionals in the field such as authors, editors, illustrators and publishers? Then a literary convention would be the place you might enjoy most.

Conventions such as World Science Fiction Convention (which is where the Hugo awards are announced), the World Fantasy Convention, World Horror Convention, Balticon, Philcon, Lunacon, Boskone, Readercon, Wiscon and Capclave are all reader friendly and while you may find the occasional filking group, men in kilts, swords and women in medieval garb I doubt that you’ll see many people dressed like the attendees of the convention seen in the movie Galaxy Quest. OK maybe one or two but they are a tiny minority. 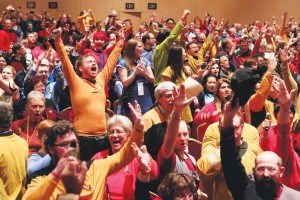 A room of Trekkies at an LA Convention

Media conventions are very much about television and film. Science Fiction & Fantasy or Horror & Paranormal guests abound. You may meet and hear behind the scenes stories of actors and illustrators, SFX experts and make-up artists and a host of media professionals.

Many of the attendees may be wearing costumes. Depending on whether you are going to a “pro” con or a fan run con the rest will vary greatly. Parties are expected and encouraged. At a pro convention this will take the form of a banquet with the guests at a fee and/or a dance or cocktail party all for various prices.

Fan run convention also may have a price attached to a banquet or “private” gathering with a particular celebrity or celebrities but they will also have fee free dances, masquerades, art shows, filking, sword demonstrations etc. Toronto Trek, Celebration, BotCon, Dragon Con, Comic-Con ( both Dragon Con and Comic-Con will appear under many categories) 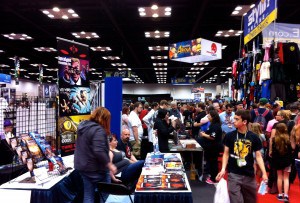 Gamers come in all shapes, sizes, ages, colors and ethnic backgrounds but they all have something in common. A love of games. Role playing, live, pen and paper, MMOG as well as video gamers and board gamers all have a lot of interactive fun at gaming conventions.

You can meet game designers, try out new games that have yet to hit the general market, and play in tournaments for glory and prizes. Once an almost male-only pursuit, gaming now has a growing number of female enthusiasts Gaming has become so pervasive that it is now nearly socially acceptable to the mainstream public. Nearly.

There are giant conventions like GEN CON and ORIGINS, where it is so crowded you may have trouble negotiating the exhibition halls due to the crowds. The upside is the great diversity and FREEBIES as there are so many gaming companies competing for your attention. Then there are the more intimate play intensive ones like Archon, CastleCon, Dragonflight Dreikonigsnacht (Twelfth Night), Festival of Dreams, HexaCon, KublaCon, MACE, MarsCon, Marmalade Dog, ShaunCon, Strategicon, The Once and Future Con, and many many more.

Keep in mind that many conventions other than pure gaming conventions have gaming tracks. If you like to game but want to do more than only game during the weekend you might look into some of the other cons with a strong gaming element. 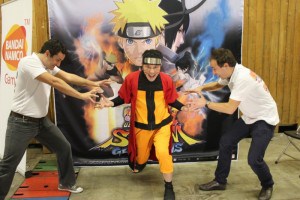 In anime the stars are the illustrators, authors, and voice actors. At conventions you will find many of these sorts of guests as well as companies promoting their projects. You will also find some of the most imaginative of costumes created and worn by fans.

At larger conventions you may find multiple rooms running films day and night. At smaller ones perhaps just one room will be devoted to showing their favorites.

There are often panels discussing aspects of cosplay, fan fiction, video games, favorite voice actors, anime series or movies. As in literary conventions there are often workshops. These workshops are mostly how to draw manga, make computer animation, or how to become a voice actor. The dealers room will be filled with DVDs , software, graphic novel manga, art books, apparel, toys and exotic ( for us ) foods. 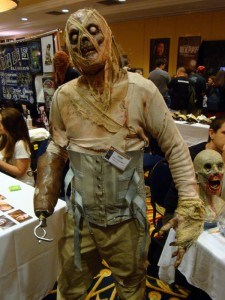 What a perfect place to let it all hang out (dating myself but who cares). Horror conventions revel in going over the top.

Long live Elvira, Freddy Krueger, Jason, Dracula, Zacherley. Even the names of these conventions and expos are meant to be graphic illustrations of what you will find there. Chiller Theatre, Fangoria, Fright Night Film and Fantasy Fest, HorrorFind, HorrorHound Weekend, Spooky Empire.

Nothing to subtle here. No sparing of the gore. It’s like the rollercoaster of genre conventions. If you have a strong stomach and a dark sense of humor you will have tons of fun. The dealer’s room, art show, video rooms all are in sync with the horror theme. Guests that reach back decades up to the present.

Once again there is a chance to meet actors, artists and authors for autographs, photoshoots, and anecdotes. Attendees go wild with costumes and you can do so too even without a ton of money or a pile of cash. Try out your best monsterish clothes and make-up or come as a victim…or not. Costumes aren’t required, they are just fun. There is usually a monster mash even if that isn’t the name given. 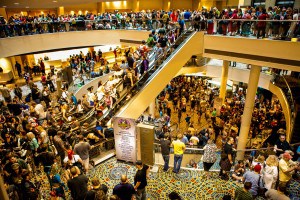 When you think of a comic book convention you will probably think of a sea of old comic books, toys, Star Wars stuff, Star Trek stuff, action figures, collectible card games and magazines for sale and you would be right but that is only a part and an increasingly small part of the experience.

You will find illustrators, authors, publishers and very often interesting workshops and panels that deal with every aspect of the industry past, present and future.

There are the costume contingents that always show up at the larger conventions and some are so good that you could almost believe you were seeing superheroes and villains walk out of the pages and off the screen to meet you and be photographed.

Some cons such as Dragon Con and Comic-Con began solely as comic conventions but grew to tremendous size, scope and diversity that they have transcended the genre that gave rise to them. Even those such as HEROES which remains focused on comics manages to have a number of other aspects and should be able to keep the whole family amused for the weekend.

Comic conventions often have a lot of pop culture and nostalgia guests. So if you would like to see people like Creature, Parthenon and Fat Mama from Who wants to be a Superhero or maybe even Stan Lee himself, you might get your chance. How about James & Oliver Phelps who played the Weasley Twins in the Harry Potter movies? Or perhaps Sean Astin or Billy Boyd and even Elijah Wood . From Heroes Hayden Paniterre and Masi Oka, or Ice-T… yes I said Ice-T AND his swimsuit-model wife Coco.

For a walk down memory lane there is Erik Estrada, Betsy Palmer, Soupy Sales, Richard Hatch, John Saxon, Adam West and Burt Ward  (Batman and Robin) , Julie Newmar, Peter Mayhew, Eddie Byrnes (77 Sunset Strip), Erin Gray (Buck Rogers), Gary Coleman, Lou Ferrigno and on and on. Some are from your childhood others are from your parents childhoods. I can tell you that when I unexpectedly got to meet the very ladylike and gracious Betsy Palmer it was a thrill.

The bottom line is conventions are places where adults can go and play and slough off the average workday week. Have fun !!

June Williams
V.P. Buzzy Multimedia Publishing
http://www.buzzymultimedia.com
June Williams has worked the convention circuit as a professional and been to scores of conventions as a fan over a period of more than 25 years.