Now You See Me – Movie Review 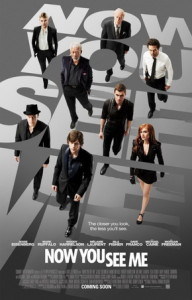 I am a big fan of stage magic (and real magic for that matter). Back in the early 1970s, there was a TV series called The Magician, starring the Hulk’s alter ego Bill Bixby, as Anthony Blake, who lived at The Magic Castle and solved murders while doing magic.

Trailers for Now You See Me had me quite excited: a movie about stage magic and capers that looked fast-paced and fun.

It was all that and more. So much more.

At it’s heart, Now You See Me is the story of four solo magic acts: Daniel Atlas aka the Lover (Jesse Eisenberg), a lady’s man who does traditional card tricks with untraditional flair; Jack Wilder aka Death (Dave Franco), a street performer, lockpick, and pickpocket; Merritt McKinney aka the Hermit (Woody Harrelson), a mentalist and hypnotist working small clubs, with a little blackmail on the side; and Henley Reeves aka the High Priestess (Isla Fisher), a Houdini-style escape artist working larger venues. All are brought together by a mysterious outside force, and become the Four Horsemen.

Of course, that happens off screen, as does lots of the slow stuff. Things that other movies might have given you in a montage, this one just skips, keeping everything enjoyably fast-paced, and the audience in the dark.

It drops just enough clues to let you figure out what’s going on – as you guess wrong again and again as the plot unfolds.

Add into the mix Arthur Tressler (Michael Caine), the money backing the Four Horsemen’s act, and Thaddeus Bradley (Morgan Freeman), an illusionist who made his career showing the world how magicians do their tricks (a la Val Valentino, the masked magician).

The Four Horsemen are committing crimes. Or are they? What they’re doing is impossible, unless real magic somehow exists. When a bank robbery becomes a part of the act in Vegas, FBI Agent Dylan Rhodes (Mark Ruffalo) bursts on to the scene, interrogating everyone in sight. He in turn is foiled by Interpol Agent Alma Dray (Mélanie Laurant), brought in because the bank is in France. She brought up the idea of the Eye, the keepers and protectors of real magic–finding the Eye could be something the Four Horseman were after.

As the two cops butt heads, the Four Horseman head to Mardi Gras to do another show, with more twists and turns. This I found disappointing, as crowded Bourbon Street was actually not loud or crowded enough for Mardi Gras. But I loved the way the act continued to build.

I kept guessing what was going on–I would be right on one count, but wrong on six more.

Things built to a confrontation, and a high-speed pursuit over familiar New York City streets and bridges.

By the end, many things are explained, yet others–still a mystery. I liked the puzzles and the magic and the sheer audacity of this film. It’s full of fun performances and it’s clear every one of the actors had a great time.

SHGP Now You See Me 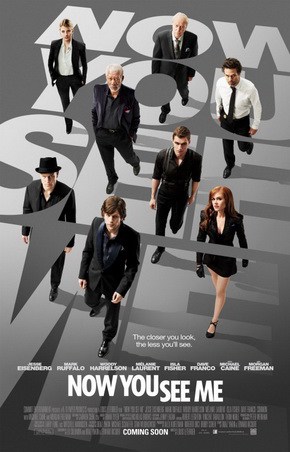 Article Name
Now You See Me Movie Review
Description
I am a big fan of stage magic (and real magic for that matter). Back in the early 1970s, there was a TV series called The Magician, starring the Hulk’s alter ego Bill Bixby, as Anthony Blake, who lived at The Magic Castle and solved murders while doing magic.
Author
Elektra Hammond
BuzzyMag.com