Five Reasons Why You Need To Stop Everything and Watch this Show! 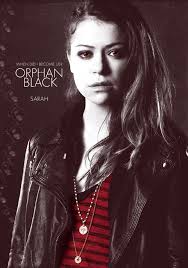 You’ve heard of Orphan Black, right? If you haven’t, then it’s either because you’re living in a black hole, or because it’s something worth keeping secret and protected before it gets whisked off into the mainstream. Orphan Black is undoubtedly being hailed as one of the best science fiction television shows on TV–and can certainly sit in the same room with some of the Big Greats in sci-fi’s past. What follows are five reasons you need to watch this–now!

1. Original Premise: At least in the way of television shows, Orphan Black has a killer premise. The show begins with Sarah Manning, a drifter, punk, thief, looking to reconnect with the child she gave up. In the opening sequence, Sarah is waiting on a train terminal when a woman throws herself onto the tracks before an oncoming train. Right before jumping, the woman (Beth), turns to Sarah, revealing an identical face. Sarah steals the woman’s bag, and later her identity, stepping into a strange and threatening situation as she begins to encounter other identical copies of herself–aka, clones–all being hunted.

2. The Acting: The Canadian actress, Tatiana Maslany, is the gal responsible for dazzling the viewer with her incredible acting abilities, as she steps head over heels into a variety of cloned versions of herself. First, there is Sarah Manning, who has an amazing accent, that you would believe is her true voice–but it’s not. There is the soccer mom, Alice; the science nerd, Cosima, who wears cool dreds; the terrible angel, who will start to show up in your nightmares; and many more. Sometimes they are on screen at the same time–and although you’re technically watching the same actress in every part, you never feel that way. Maslany sells each version as their own unique character. (She received a Golden Globe nomination–and totally should’ve won!)

3. Drama and Comedy: A hard mixture for TV writers to meld are drama and comedy, but Orphan Black succeeds in being dark and intense, right along side some humorous moments that keep it light. One element lending to the comedical tones is the character of Felix (or Fe for short). Felix is Sarah’s foster brother, an eccentric (to say the least), who always has Sarah’s best interests in mind. He also is called on to save the day many times. Original and flawless, Felix is a refreshing addition to TV.

4. Twisting Plot: If you like stories that require you to pay attention, you’re in for a ride. Orphan Black guides us into an intense mystery and underworld of science and Neolustionists, crooked cops, what it means to be a part of a family and more. It is multinational, multicultural, multi-everything–there is something for every viewer. The show will keep you guessing, suck you in, and reward you for your time. In ten episodes, you will sense the cliffhangers, the action, and intensity, that will have you rooting to see who survives.

5. The Science Rocks: Science fiction that has a foundation in hardcore science, that is not only fresh, but modern and timely. Cosima is the science expert; she’s also a medical student, smart, sexy, and a thinker–she likes to consider what others haven’t, and lends to being the glue in the group of clones trying to hash out who is trying to kill them. When the science is introduced, it’s done in a way that any viewer can catch on. As much as this can be our world, it is slightly askew, a tad on the countercurrent side, and we’re eager to see more of it. *Sarah, though she is cloned, also has a child–another killed angle that’s explored.

Season One of Orphan Black is now available on DVD (or stream). Season two premiers in April 2014 on BBC America. (It’s a Canadian show, with as much kick as Continuum, also Canadian). So check it out and enjoy an amazing addition to science fiction television.