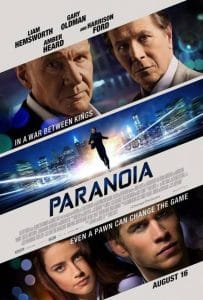 Paranoia follows Adam Cassidy (Liam Hemsworth), a whiny, entitled, 20-something techie who has spent the last six years working for Wyatt Corp, a major player in the telecommunications industry. He and his friends are impatient that they haven’t advanced yet, to big bonuses and living large.

A mistake puts him in a vulnerable position, and CEO Nicolas Wyatt (Gary Oldman) gives him a choice: face the consequences or go to work for their opposite number, Eikon, and steal their secrets. Wyatt has a long history of competition with Eikon and its CEO Jack Goddard (Harrison Ford), and the stakes are high.

Adam, full of himself, confides in no one as he is pushed into riskier and riskier behavior while the two companies race to bring new innovative products to market.

The more he becomes involved in plotting, the more his personal life is thrown into turmoil. His relationship with his ailing father and his friends suffers. He works to build a new relationship with hot, attractive Emma (Amber Heard), head of marketing at Eikon, but at what cost?

Paranoia has a really nice buildup of tension as more and more players enter the game and the situation grows ever more complex, even as Adam realizes he no longer has any idea who to trust.

Until I realized that I couldn’t find any major characters to like–Adam’s lack of patience just grated on me, and Wyatt and Goddard were never satisfied with what they had. Emma didn’t show a lot of [any!] emotional depth. I found myself wanting more of the peripheral characters: in particular Adam’s father and his friends.

Deaths occurred to people we heard about, not to people anyone actually knew–more a sort of vague threat than one that had any real teeth.

As motivations for most of the people became clear, they also became a clear reason not to like those same people–no one in this move is in it for world peace, and most of the characters are just too shallow to take a shine to.

A quibble, too, for the techies out there: computer software and hardware seemed to be developed awfully quickly, and some of the fastest copying ever takes place in a critical scene–I can’t download my email that quickly!

So, really, I just didn’t get invested enough in the characters to care about their hardships. The younger actors (Hemsworth, Heard, Till) were all terribly attractive as they whined about their various situations. The veteran actors (Ford, Oldman, Davidtz, McMahon) gave really solid performances, but there was absolutely nothing redeeming about their characters.

So, you know, see it, don’t see it, I can’t really bring myself to care one way or another . . . . just don’t send someone after me for saying that. 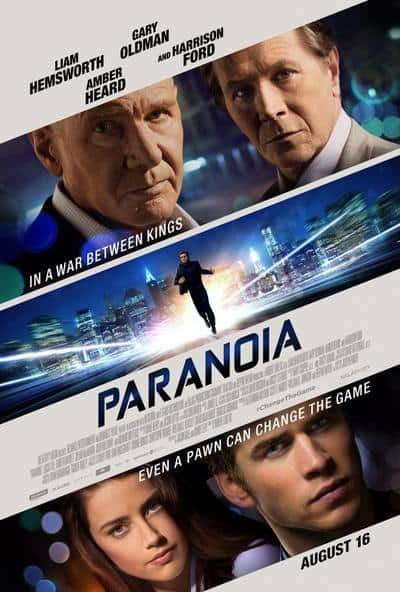 Article Name
Paranoia - Movie Review
Description
A mistake puts him in a vulnerable position, and CEO Nicolas Wyatt (Gary Oldman) gives him a choice: face the consequences or go to work for their opposite number, Eikon, and steal their secrets. Wyatt has a long history of competition with Eikon and its CEO Jack Goddard (Harrison Ford), and the stakes are high.
Author
Elektra Hammond
BuzzyMag.com