Hello. This is Jean Marie Ward, for BuzzyMag.com. With me today is best-selling author R.A. Salvatore, who is here at DragonCon, as the guest of honor. You have a really interesting approach to writing for the gaming industry. Could you talk a little bit about that?

R.A. Salvatore: Yes. To me, as the technology improves, so do the tools to tell a story improve, and I think that is the critical part. I do not think this is anything unique to me. If you talk to any video game company, they are all trying to get to the point where the character actions have a bigger impact on the world around them, and technology is making that possible. If you go back to the early days of MMOs, you were doing dial-up. It was enough just to get people to stay in a persistent world, let alone changing. You see games like Guild Wars, that just came out, that have events going on, that are cooperative. What you do makes a difference in that region, at that time, with that event. To me, the way I approach it is that the most important character, when you read a book, is the character in the book.

You are living vicariously though the character. You have no control over what this character will do. You are on the edge of your seat when this character is in danger because you are living through the character. In a video game, your character is the one that matters. What I want players in video games that I have anything to with to be able to do, my goal is always for them to write their own book as they go through the game. Their own story; the life story of their character, that has an impact, that can be heroic or villainous, maybe, on the world.

JMW: How did you get started writing?

R.A. Salvatore: When I was very young, I used to read all the time. I had a deal with my mom; as long as I got straight A’s, she would let me bag school, stay home and read my Peanuts comic books. I have this great collection of first edition Charlie Brown books. I used to read and write Snoopy books and dinosaur books. I used to write all the time. I am talking like kindergarten, first, and second grade; I loved it. Then school pretty much beat the reading and writing out of me. They took it from being something that was like letting my imagination soar, to being a chore. With red marks all over the paper and books to read that were totally irrelevant to anything in my life or anything I wanted to do, accomplish, or learn about.

I remember in eighth grade, I would get books like ‘Ethan Frome’ and ‘Silas Marner’. You might argue with me now that those are good books, but they were not good books to an eighth grade boy that really did not care about them. By the time I got out of high school, I actually started college as a math/computer science major. I only wrote when I had to and only read when I had to, to get the grades. Then, my freshman year of college, for Christmas 1977, my sister Susan gave me a copy of ‘The Hobbit’ and ‘The Lord of the Rings’, I was mad, because I wanted money; my car was breaking down and I needed money. I just tossed them aside and did not think anything of them. A couple of months later, New England got hit with what is called The Blizzard of ’78. It shut everything down for a week; you could not go on the roads. I was 19-years-old, trapped at my mom’s house and was not really enjoying myself.

Then, I found out I was not trapped, because I went to Middle-earth with a hobbit named Bilbo Baggins. It brought everything back to me. It brought me back to being that kid reading the ‘Peanuts’ books. All of a sudden, that love of adventure was rekindled because of that book. I kept thinking, ‘Why did someone not give me this book to read when I was in the eighth grade? Why did they give me ‘Silas Marner’? Give me this book.’

I changed my major to communications media and all of my electives became literature courses. My love of reading rekindled. A year later, I was reading Chaucer in Middle English, reading Shakespeare and Joyce, and all the classics, and loving reading again. I always had a soft spot for fantasy because of Tolkien. By the time I had graduated from college, I was out of books to read. There were not that many fantasy books out there.

There is Brooks, Tolkien, Donaldson, and McCaffrey, but there just were not as many, they could not keep up with me. I had nothing to read. I wrote my own, and that is how I started writing. 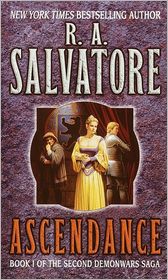 The Legend of Drizzt 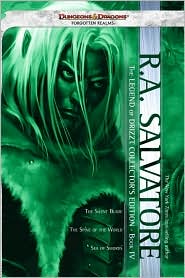