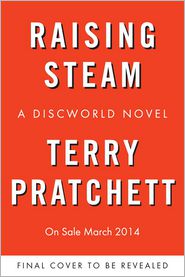 THE FINE ART OF FIRKYDOODLING.

When Dick Simnel’s father tinkers his way to an untimely and shrapnel-ridden demise, young Dick vows to carry on his dad’s labours and – with somewhat more deference both to mathematics and to workplace health and safety – harness the power of steam. Dick is a sensible, industrious northerner wi’t’flat cap and t’greasy rag t’prove it. When he brings his gleaming new locomotive down to the big city, little does he know what cultural upheaval he’s laying the tracks for.

One great strength of Terry Pratchett’s Discworld series comes by way of the eponymous world’s being always in flux. Ever since The Colour of Magic (1983), in which Ankh-Morpork first was established – a most pungent and exquisitely base city – the Discworld has undergone a renaissance that has been blossoming now for thirty years and seen great strides taken in terms not only of technology but also of social issues such as gender, race and even species equality. Pratchett’s fortieth Discworld book, Raising Steam, deals with the advent of railways, the newfound humanoid dignity of goblins (following on from the previous novel, Snuff), and the rise of terrorism by way of a rabid, deep-dwelling dwarf sect. In many ways this is Pratchett’s most ambitious project to date. Sadly, it is also one of his less accomplished.

The sleeve notes to Raising Steam reveal that Pratchett has stopped typing his manuscripts, and instead now dictates to his computer. This alteration to routine may, through impetus of experimentation, have led Pratchett (an avowed logophile) to scatter an extra handful or two of unusual words throughout the novel, and presumably accounts also for such typographical – or rather, over-enunciated – glitches as objects being located ‘near by’ (two words). More damningly, it seems to have manifested in a skittishness of prose; a somewhat piecemeal approach by which Pratchett jumps from vignette to vignette down a line of carriages being pulled inexorably but with no great urgency towards a resolution of minor themes and a wide-eyed appreciation of the golden age of steam. Moist von Lipwig, the book’s nominal protagonist, is not one of Pratchett’s more compelling, and although his previous adventures (Going Postal; Making Money) both were derring-do affairs, on this occasion he doesn’t so much drive the plot as sit back alongside a host of other passengers while the scenery trundles past. An unusually large number of characters having been reprised from previous stories and called aboard this latest outing, Raising Steam constitutes a rare instance of Pratchett’s crafting a book that may prove insufficiently self-contained to hold the interest of new readers. Though stoking the nostalgia of longstanding fans, Discworld in-jokes such as ‘going librarian’ lie dangerously self-indulgent across Pratchett’s newly laid tracks.

In mitigation of such criticism, let it be said that Terry Pratchett has given himself wondrously high standards to live up to, not least of all in his imaginative scope and his ever-blossoming proliferation of wordplay and wit. Raising Steam may not be his finest work, but still it chugs along nicely and affords Pratchett plenty of scope to traverse the variegated landscape of language. Dick Simnel’s mastery of the sliding rule is rivaled only by Pratchett’s knack for turning a phrase – “Even goblins had finally been recognized as sapient creatures, to be metaphorically treated as brothers, although not necessarily brothers-in-law.” – and as for Pratchett’s vocabulary… well, to be sure, some of his more exotic words end up presenting across a host of different speakers, like a contagion, but what fantabulous words they are! Apropos of nothing else, Terry Pratchett’s readers continue here to travel first class.

Raising Steam (Discworld) – GET IT HERE! 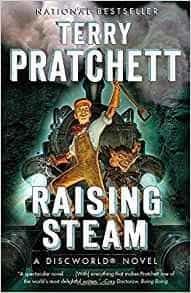 The new Discworld novel, the 40th in the series, sees the Disc's first train come steaming into town. Change is afoot in Ankh-Morpork. Discworld's first steam engine has arrived, and once again Moist von Lipwig finds himself with a new and challenging job.