Patricia Briggs offers up another literary gem of Women’s Empowerment. Seraph must use her Traveler power to save her husband from a dark force. 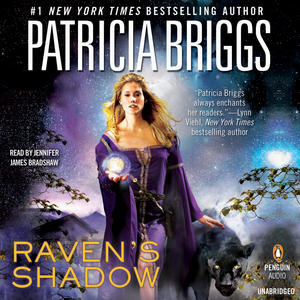 Seraph is a Raven mage who left behind her responsibilities for the love of the ex-soldier Tier. But when Tier disappears, Seraph must use her magic and fulfill her ancestors’ oath to protect humanity from destruction.

Fantasy books, in general, are hard to get into. Most lack the kind of non-stop action and suspense needed to suspend disbelief – especially for a male audience. Then there are the soap opera style plots, incestuous and convoluted in their design.

While Patricia Brigg’s “Raven’s Shadow” is no different, it demonstrates the versatility that we have come to expect from the creator of the Mercy Thompson series. For that reason alone, the novel is worth reading, if only to get a sense of the early years of Patricia Brigg’s prolific career up to this point. However, there is more to it than meets the eye.

” centers around Seraph, a Traveler with the power to conjure magic. Normally, Seraph would be traveling the countryside of the Empire, protecting ordinary citizens against evil of all kinds.

But after twenty years of blissful marriage to Tier, solsenti with Traveler blood, she has gotten used to the joys of being a housewife. When her husband goes missing, however, she is forced to journey far and away to solve the mystery of his disappearance. What she comes face to face with is a dark force that can only be combated with magic – Traveler magic.

Raven’s Shadow is longer than Brigg’s later novels, packing in nearly twenty years of romance, war, and mystery in a handful of chapters. In one instance the book skips an entire generation, making the plot hard to follow unless one is paying attention. This is not a book one can skim. This is a weekend project. Conversely, fantasy buffs who enjoy these elements should love this novel.

Reading it, one notices the similarity of themes between “Raven’s Shadow” and the Mercy Thompson books – female empowerment, the role of women in a patriarchal society, the perversion of religion by politics. It is like excavating a Viking ruin – primitive, yet awe inspiring. Little wonder that this Montana resident is blazing a trail in science fiction. A long, winding trail hopefully.

While the novel isn’t a classic, neither is it a disappointment. If anyone is looking for a book that breathes new life into an old genre, this is it.