Hello. This is Jean Marie Ward, for BuzzyMag.com. With me today is best-selling author Robin Hobb, who is also Megan Lindholm. Welcome Robin.

Robin Hobb: Thank you for having me here.

JMW: One of the things that fascinates me about your writing is that you seem to view magic as not necessarily a positive force. It can be very dangerous for your characters. Am I reading this right?

Robin Hobb: I think magic, of course, is power, and as we have all learned from infancy, practically, power corrupts and absolute power corrupts absolutely. It is not that magic is a destructive or negative force so much as that it can be, in the wrong hands or people using it to extreme ends of any kind. I would say it is the idea that magic is a very powerful thing and that it can be seriously misused.

JMW: Themes of responsibility are very important to you. I can see that at work in the ‘Far Seer’ novels, especially, that you have to be responsible for your actions.

Robin Hobb: You have to be responsible. My feeling about magic is it always has to have a cost. When you take economics you learn about opportunity cost, that if you have a dollar maybe you can get two candy bars, but the opportunity cost to getting to the two candy bars is that you cannot buy the toy that was a dollar. You have to make choices. Magic very much as opportunity costs. I think you have to have that in a fantasy because if the magic comes without consequences, without cost, it is like a story where you have a magic ring that gives you an infinite number of wishes, there is no story.

JMW: Yes or the story is the wishes go horribly wrong.

Robin Hobb: One after the other, yes. We frequently see that in the story
of, ‘You Have 3 Wishes’. The first one goes wrong and the second one
you try to fix it. Sometimes, by the third one you get it right.

JMW: When you started writing the ‘Assassin’s Apprentice’, did you ever imagine that the Realm of the Elderlings would get so large? Did you plan that many books?

Robin Hobb: I did not specifically plan that many books, but I think with any idea that you carry with you for a long time before you begin writing, you know the history of things as well as the future of things. I could probably go back to the beginning of the ‘Far Seer’ trilogy and ‘Assassin’s Apprentice’, and if I cared to write backwards form there, I could write just as many books about what went before, how Chivalry met Burrich, and what the story is between Burrich and Patience, back through the history.

As a writer, I know that there are events that happened long ago, from seismic events to various people coming to power that have affected this story that I am telling today. I know that those effects will echo down through the history of that world and the future of that world.

JMW: You mentioned that you had the world in your head for a long time, before you started writing it. How long? When did it first occur to you?

Robin Hobb: I started out writing on a Smith Coronamatic typewriter years ago, so this very much predates computers and saving a file on disk or saving a file on your hard drive. Predates the Key Pro even, which was my first computer. When you are writing a story, you always reach some point at which you get an idea for another story that looks much more attractive than what you are working on. If you get sidetracked, you never finish the story that you are working on.

I developed a habit of when one of those ideas popped into my head, I would grab whatever scrap paper was handy and write down one or two sentences, and I would just open my top drawer and drop it in. Then when I would get stuck for an idea or stuck in a story, I would take out these pieces of paper, play with them, look at them, and see if I remembered what it was that I was thinking of when I wrote down, ‘A blind king.’ 6 months later you are saying, ‘I do not even remember what that was about.’

I remember it very well, it was a torn flap off an envelope and on it, it said, ‘What if magic was addictive and the addiction was completely destructive?’ That was the first little tiny piece of what would become eventually ‘The Skill’. The other idea that was in there was to deliberately take every fantasy trope and cliché that I could think of and try to knock all the rust off them and make them work again, because of course, if something is not cliché or a trope it is because it speaks to us on some level. There is some key there that fits almost everybody’s heart. If you can get back to that, you can tell a very compelling story.

Those were the two things that were in the desk drawer for a long time, before I realized actually that these were two parts of a whole. When I put them together, I had the beginning of the ‘Far Seer’ trilogy. 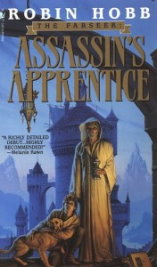