JMW: Hello, this is Jean Marie Ward for BuzzyMag.com. With me today at RavenCon is multi-award winning artist, Frank Wu. Welcome, Frank.

JMW: It’s going pretty good for me. How are you enjoying the Con?

Frank Wu: I had the most awesome thing happen last night at 1:30 in the morning when I got an email from Analog magazine accepting my first story in a pro, real magazine.

JMW: You got a story published in addition to the art?

Frank Wu: Well, it got accepted.

JMW: Yeah. Well, that means it got…

Frank Wu: Yeah. I just found out last night. It’s this story that I’ve been working on for literally 10 years. It’s all about ants building a space elevator. And yeah, I wrote it and rewrote it and had all these people read it. And because it’s about ants… I love ants and invertebrates and stuff, so I read six or seven books all about ants. I could tell you a lot of stories about ants, but…

JMW: I don’t think we have the time for it, but I know you’ve got a thing about invertebrates.

JMW: Absolutely. We share our planet with many, many strange things.

JMW: You’re going to be a published writer in Analog, one of the big markets. But you are possibly the most award-winning fan artist of all time.

Frank Wu: I think Brad Foster is one more worth…

JMW: Lots of you goes out there.

JMW: Lots of you goes. You’ve done covers. You’ve done illustrations. You’ve done programs. And the quality of your art are in the Science Fiction Museum or you will be. How does that differ from a pro artist? How can you create a dividing line between a fan and a pro artist these days?

Frank Wu: A lot of it’s money. Pro artists get paid a lot to do covers and stuff like that. And also in the pro artist category, you have guys like Giancola, and Eggleton, and Whelan, and guys like that who are just these magnificent painterly artists. And they’re just these gods of our field. And the fan artists are… we’re kind of a different thing. We make some money sometimes, but not a whole lot of money. Most fan artists aren’t full-time artists, whereas the professional, pro-artists are. And so we have time to do other things, like writing, like my story in Analog.

JMW: Being a bacterial geneticist.

Frank Wu: Being a bacterial geneticist. My day job is I’m a patent agent and a bunch of my patents that I wrote just got sold for $35 million dollars for…

Frank Wu: Thank you. Thank you, I’m very proud of that.

JMW: Can you give us a clue of what they’re about, just in general terms?

JMW: So really helping the world out there. It’s nice to have a job that actually helps the world.

Frank Wu: Yeah, if I were a pro artist, I would be doing art all the time. And my mind is like it cannot be constrained and I must adventure and do all these other things.

Frank Wu: The last one is actually really interesting because every once in a while, I’ll be writing a patent and I’ll have to reference some science fiction story or novel that I’ve read that has a similar idea. There was a guy who was trying to get a patent once on using lasers for mining, and the patent office actually sided against him as prior art, this Dick Tracy cartoon, where they’re using lasers to mine on the moon.

Frank Wu: So it’s like that’s prior art. Someone else had that idea before you. You can’t get a patent on it. And there it is.

As for how science informs everything I do, I like having an explanation. Like why do the spaceship parts work that way? Why are the engines arranged that way? What are the shields like? Where are you getting power from? Why are things placed the way they are? Every once in a while, I will get an opportunity to illustrate a story and I’ll look it and I’ll find the scientific error in it. And I like to point it out, because “This shall not pass!” And one of my favorites is there was a Jay Lake story where he talks about taking DNA and break it down to its atoms and making proteins out of it, but you can’t do that. That just doesn’t work because you don’t have the right atoms. You need sulfur to make proteins, but there’s no sulfur in DNA. And you can’t go the other way because you need a lot of phosphorous, phosphates, to make DNA, and there’s hardly any in proteins. So I had to point out that science error that the author made. “You got to fix that error, by the way.”

Frank Wu: Yeah, he did fix it.

Frank Wu: Well, that is the greatest period of rock ‘n’ roll from “Rubber Soul” to, say, The Who’s “Who by Numbers.” And it coincides exactly with the years of the Vietnam War where there was a lot of guys going there. And the thing is everything in that time period, even when you weren’t saying the words “Vietnam War,” you were talking about it. And there was this profundity and meaning to everything because there was always this fear that you could get shipped off. And also during that same period, we were fighting for the rights of people who were not white, straight guys: women’s rights, black rights, gay American rights. All of this stuff was happening.

And you contrast that with today, 2015, where we’ve been in wars in Afghanistan and Iraq for the last 14 years, and nobody seems to care. And that was part of what this image for the RavenCon T-shirt is all about. Because here you have this giant war machine in the back with explosions and kaboom, kaboom, kaboom, and then these dinosaurs ice skating as if nothing’s going on. It’s like two completely different worlds right next to each other not communicating at all. And it’s like we’ve forgotten that there is a world outside of our little bubble, and I think that’s kind of sad.

JMW: Yeah. It’s not the same. And we do seem to isolate ourselves, especially since the ice is melting in a very literal sense.

Frank Wu: Because life is a trans-dimensional joyride.

JMW: This is true.

Frank Wu: I think of it as such. There are so many beautiful, wonderful things like the crazy invertebrates and the new dinosaurs are being discovered. And oh my God, they’re finding a new planet every couple of days.

JMW: Or making a planet not a planet anymore.

Frank Wu: Like making a planet not a planet. And we have space probes going to Pluto for the first time. And what color is Pluto really? We don’t really know. We don’t have any good close-up pictures yet. And I’m really looking forward to that. And it’s a really exciting time for science and for art and for literature and all these great things.

JMW: Now, how did you come to be involved in making a movie about a giant space chicken?

JMW: Better tell the folks the title of it. I’m going to mispronounce it.

Frank Wu: I actually am working… now that I’ve got my first real story published or accepted to Analog, I am working on another story, which is about intelligent octopi. No, no, that’s…

JMW: I think we were just talking about that.

Frank Wu: Exactly. Well, octopi, really clever. They can unscrew a bottle from the inside. They can learn how to take your picture. They’re very smart. They can crawl out of their tanks and kill things in other tanks and then crawl back in. They use jewels. They use water as cutting jets. If they don’t like you, they will shoot water out of their tank at you from across the room. And if they meet you three months later, they will remember that you pissed them off and they will still squirt you from across the room. That’s how smart they are.

But, anyway, why haven’t they taken over the world? From a human point of view, it’s kind of a good thing. But from technical point of view, why haven’t they? Well, one of the things is that octopi have a really short life span. So the reason that they die is because there’s a brain. There’s eye balls. And between them, there is a optic nerve, like human beings. And then there’s a little gland called the Optic Gland, which comes off of the nerve. And that gland produces huge amounts of sex hormones during the reproductive cycle, and it basically takes over their minds. And that’s why the female will guard the eggs and stop eating. That’s why the male will die soon after mating.

And if you just have a mutation that changes the level and the production of the sex hormones a little bit — I’m thinking maybe 40%, 50% — then you have a female that will still take care of her eggs, but she’ll be like, “Hmm… I’m kind of hungry. Maybe I’ll go get something to eat and keep my eyes on the eggs, and then go back to the eggs, as opposed to just not eating at all.” And if you make that little change so that there’s some overlap in lifespan from one generation to the next, then the female will survive, take care of the young, and teach them stuff. And then instead of having this intelligence and then it dies, intelligence and then it dies, you have intelligence, and that’s transferred to the next generation, and that knowledge is transferred to the next generation. And you can have this linear growth, and then suddenly octopi…

JMW: Take over the world.

JMW: I don’t know how we could top that, but is there anything you’d like to add?

Frank Wu: Not really. The world is full of wonders, and I think a large problem is that people think too much about themselves instead of looking outward at other people and what they need. And also the wonderful things all around us, and the new joyful things that are being discovered and created all the time.

Frank Wu: Thank you. This is really fun.

JMW: …best of luck at all your projects, including your spaceships on Revolution 60 and its descendants. And thank you for BuzzyMag.com. 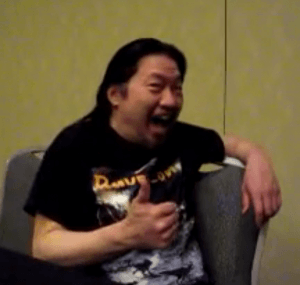