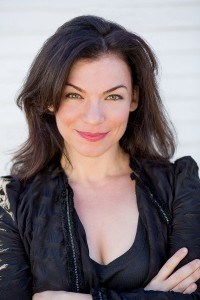 Sera Gamble Interview. An executive producer and show runner for several seasons of SUPERNATURAL, and now, with John McNamara, she has adapted Lev Grossman’s THE MAGICIANS trilogy of novels for Syfy.

Sera Gamble loves the supernatural genre. Attending the Television Critics Association panel for THE MAGICIANS, she’s wearing a necklace that spells out the word “Witch.” This makes sense, given the nature of Gamble’s television career: she was an executive producer and show runner for several seasons of SUPERNATURAL, and now, with John McNamara, she has adapted Lev Grossman’s  THE MAGICIANS trilogy

of novels for Syfy. Season 1 is currently airing on Monday nights. Gamble is also a writer/executive producer on NBC’s AQUARIUS, which McNamara created, and which will be back this summer.

For those unfamiliar with Grossman’s books, THE MAGICIANS deals with Brakebills University, where students work in a variety of magical endeavors. The show follows Brakebills new attendee Quentin Coldwater (Jason Ralph) as he tries to find out whether Fillory, the magical realm he read of and is obsessed with, actually exists. In another story thread, Quentin’s friend Julia (Stella Maeve) learns about magic outside of the school.

When told that it’s been said of SUPERNATURAL that if either of the main characters ever learned anything, the show would have to come to an end, Gamble laughs. “That’s hilarious.”

It seems like in THE MAGICIANS, the opposite is true, as the show is largely set in an institution of learning, albeit an unconventional one. Gamble says, “We are very lucky we’re doing a thirteen-episode season on cable, so we get to curse a little bit, we get a little bit more adult content, and also have a strong feeling of not diluting the story. We don’t spend much time treading water. I would say we spend no time treading water in this season, because we have so much story to tell. “

And the characters do indeed grow and learn and change as the story progresses. “I think that’s the goal of the story,” Gamble elaborates, “is to trace these people over this very seminal time in their lives. So in success,” that is, if THE MAGICIANS runs for multiple seasons, “we will see what happens to them in a decade.”

THE MAGICIANS also gives Gamble more room to explore female characters who are on an equal footing with the male characters than she’s had on her other gigs. “A huge appeal of this book series for me, and of this show,” Gamble relates, “is that there are very interesting, complicated characters of all genders, of all places on the sexuality spectrum, and we get to explore that. Especially at the time in your life when you’re coming of age, when you’re growing up, when you’re becoming an adult, that’s probably the time when you start to question those things about yourself, so it lends to the story.”

, Gamble points out. “We aged them up. In the books, when you meet Quentin, he’s seventeen, and in the book series, he’s about to enter graduate school. When we were asking ourselves questions about coming of age stories and when those important moments happen, a lot of them happen in your early twenties. I think that’s very true of our culture today. So we get to do the really adult version of that.

“We wanted to be true to the books, and we wanted to find a way to tell a story that we know is going to span a good number of years. We didn’t feel that that initial stage of Quentin and his friends’ development suffered from aging him up, and it makes it much easier to continue to tell their story as they get into their late twenties.”

Asked if starting the characters as slightly older would avoid a HARRY POTTER problem of having young actors growing at too rapid a rate onscreen, Gamble laughs again. “I don’t believe that there could be a HARRY POTTER problem. I think it would be terribly difficult for an actor who looks seventeen when you meet him to play someone who’s thirty-three, but I don’t think we’re going to have that problem at all with Jason.”

Given the fact that they both take place at schools of magic, Gamble says she’s ready for comparisons, especially since Grossman is open about being influenced by J.K. Rowling’s works. “I think we will hear that. I think we’ll hear that in the positive as well, but I guess I don’t really worry about it, because THE MAGICIANS as a story is knowingly inspired by HARRY POTTER, so HARRY POTTER and NARNIA are the touchstones of this story, and the point is that we’re telling an adult story about a world in which destiny and fate and what you’re supposed to be doing with your life and who is the Big Bad become complicated questions that don’t have clear answers.”

Prior to THE MAGICIANS’ Syfy premiere, the opening episode was screened for some fans of the books. “My experience of the fans of Lev’s books is that they’re extraordinarily generous,” Gamble says, “that they love the books and they want to see what it looks like on television. I think there’s a natural trepidation that comes when you love something and it’s been passed into someone else’s hands. Luckily, Lev has been helping us along the way, and he gives the seal of approval, and he calls me and tells me when he thinks there’s a better way to do something, so hopefully the fans of his books will give us a chance based on that.”

The show will reflect a lot of people’s real-life college experiences, Gamble notes. “[At college], I was figuring out what my sexuality was, in some ways. When you’ve only been sexually active for a few years, everything is new. There’s a reason they say, ‘There’s a time and a place for everything, and it’s called college.’ Our characters are doing a lot of experimenting and figuring out who they are, so you’ll see some of that on the show as well.” 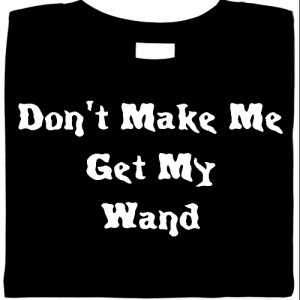 SHOP!! Don’t Make Me Get My Wand Shirt

When Gamble was a child, did she have her own personal Fillory, a magical place she’d read about and ached to explore? “Yes, I wanted to climb through that mirror and go to Wonderland. That was mine when I was a little kid. I related so strongly to Alice. But I think that that feeling – it’s been written about by a lot of writers. I mean, NARNIA does an amazing job, Neil Gaiman has an amazing version of it – because you want to believe that if you just could find the door, you could get to the other place, so that’s such a visceral feeling. It’s my favorite moment in the pilot, when [Quentin] crawls through the bushes and he comes out the other side in a whole new place, because I think that’s an almost universal longing for people.”

Asked what she’d most like people to know about THE MAGICIANS, Gamble replies, “I would love for people to just check it out and see, because there’s something in it for a lot of people – fantasy fans, there’s a lot of boxes that can be checked, and people who just enjoy watching emotional drama and young people, I think there’s a lot for them, too.”