Whether you are a fan of “The Southern Vampire” series by author Charlaine Harris, or a newly turned devotee that came into the fold with the start of the True Blood television series one thing should be clear to you,

Sookie Stackhouse can now choose from a smorgasbord of attractive males. I’ll admit that I’ve read all the books in the series and I have my favorite but for the sake of fairness, at least in this post there will be an objective assessment of all five males.

Vampire- He was turned at the end of the Civil War and retains much of the outlook of a southern gentleman of that age. As he was not a willing recruit into the children of the night, he suffered terribly from the loss of a life he might have lived with his wife and children.

His life was stolen from him.

His occupation other than being a vampire is unclear. He does work for the vampire hierarchy and he does seem to have a bit of money. He even had enough cash to fix up the home of his descendants who were still living in Bon Temps. Insofar as such a being can love, he loves Sookie, but his position in the vampire community often puts her in danger AND those gentile southern manners sometimes can get on her nerves. Are her feelings for Bill true love or just so strong because he is the first male she has ever been close to who doesn’t flood her mind with unwanted thoughts? Sookie being a telepath and Bill being dead really did form the basis of their relationship at the beginning.

They can never have children. Well, what they can never do is procreate together. They can’t even have a morning breakfast together in a sunlit kitchen. He has hidden the truth from her on more than one occasion. Worst of all he has betrayed her. He has also stayed in the shadows when she wanted nothing more to do with him just so he could watch over and protect her.

Shape shifter -When Sam shifts it is mostly into a Collie. Who doesn’t like to have a Collie at their side? He doesn’t run with a pack, doesn’t ever hunt humans, and has never been known to bring in fleas. He is a shifter by way of genetics and he can no more turn a human into a shifter than he can move Merlotte’s onto the Vegas strip. Does Sam have trouble fitting in to society? Yes. Those problems are in part the result of having to keep his shapeshifting nature to himself and partly because he has no family, no pack, to belong to. Unresolved family issues as we all know can keep you pretty isolated without having any supernatural element.

Weres and shifters and many other supernatural creatures have chosen to keep their natures to themselves. Unlike the vampires they can’t point to some scientific breakthrough like True Blood to make them more acceptable to the public at large.

In the world inhabited by Sookie & Company they are not likely to share their secrets with humanity any time soon.

As an innkeeper Sam is a congenial host. If he is a little hard on the staff can you really blame him? He has wild and wacky workers. His cook LaFayette Reynolds, cooks up a storm, has a kind heart which he tries to hide, is funny as hell and gets himself into a world of trouble. When LaFayette disappears Sam has to hire another cook. This new guy suffers from post traumatic stress disorder and gets rattled easily. As to the wait staff, Sam has to deal with Dawn Green barmaid/waitress who is also a fangbanger (a human who has sex with vampires for thrills) and Arlene Fowler, a woman who keeps falling for the wrong kind of men and has managed to marry most of them. Arlene has 2 kids and has to change her work schedule more frequently than a newborn’s diapers. Sam has also employed Maudette Pickens and Amy Burley as well as Sookie herself and each and every one has brought him trouble. As a businessman Sam has not been able to make a whole lot of money and I don’t believe it is because Merlotte’s is located in a little town like Bon Temps. It is more because he mixes business with personal stuff…not necessarily pleasure.

Sam is a loyal and loving friend. Sookie can talk to him about absolutely anything and he will really listen and not be judgmental. She can trust him with her life. He doesn’t have a whole lot of patience and self control and has found himself in bed w-a-y too fast with the result of having a whole lot of regrets. I think he loves Sookie in a way that would not disappoint either of them but it doesn’t look like he will ever have a shot at proving that to her. 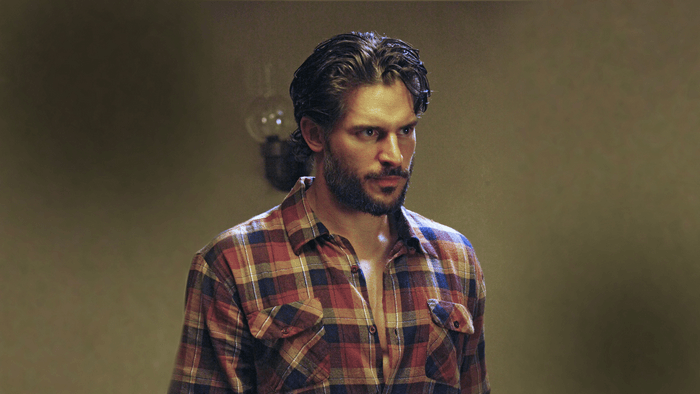 Alcide is a powerful werewolf. A definite Alpha and no loner. Not that he is without baggage. His ex-girlfriend, Debbie Pelt is as dangerous as they come and not ready to relinquish her hold on him. Plus he is old fashioned in many ways that makes Sookie uncomfortable. In addition to being protective and gentlemanly, he is also hubba-hubba sexy. Before they can really bond both a pack war and a new girlfriend shatter their possible love life….for now, but things can change in the world of fiction even faster than real life. After all he eventually did gain a position of power that might make things possible if Sookie can forgive him.

He is contractor and owner along with his father of a very successful construction firm. It is kind of nice that he has more than a few coins to rub together. He does not have to live on the fringe of society despite that the weres have not decided to make their existence known to the non-supernatural world. Sookie likes being treated as a rare jewel…sometimes, and Alcide has a flair for making her feel special in a good way. PLUS, they can enjoy sunlit afternoons together. Did I mention the chemistry between them is off the charts?

Eric is not just a vampire; he is Sheriff of area 5-that means he is responsible for the vampires in that region. He also owns Fangtasia, a club for vampires and their admirers. Born a thousand years or so ago as a Viking, he is more in tune with modern society than Bill Compton who was born 900 years later.

Eric is an excellent businessman and is accomplished in the art of vampire politics. He does not hate himself for being a vampire the way Bill does. He knows he is on the top of the food chain and doesn’t regret it. Can he be brutal? Sure, but he isn’t a sadist and is part of the group that agreed with the notion that vampires should “come out” when True Blood became available. Unlike Bill, Eric has been honest with Sookie most of the time. He has a sense of humor that Bill is missing. He trusts her, which none of the other males in her life seem to do consistently. I’m pretty sure he didn’t even realize he had fallen for her for quite awhile. Not that he wasn’t trying to get her into bed for blood and sex from the beginning, but it is pretty obvious that it has gone way past that. Can they ever get together on a permanent basis? Unlikely, but only Charlaine Harris knows for sure. Oh, and if Alcide and Bill are physically attractive Eric is not only more so but in addition is like the Grucci fireworks of sex.

John Quinn has a lot going for him. A well built, olive toned, 6 foot 5 inch hunk of masculine beauty, he exudes a quiet confidence. As large as he is he moves with gentle grace. In some ways, even as a human, he can remind you of the majestic Aslan of Narnia. Quinn is hairless, even his head is bald although that is because he shaves it. Most striking are his deep purple eyes that can make Sookie or just about any female on the planet melt. One can sense a maturity about him. He posse’s wisdom mixed with compassion which tempers but doesn’t override his firm sense of right and wrong. In addition to that propensity for justice and mercy is his capacity for selfless giving. John Quinn comes into Sookie’s life as a result of his work in settling a werewolf “pack” dispute in his capacity as referee. Oh did I mention he is a weretiger? The chemistry between him and Sookie was remarkable. Unfortunately he carries with him more baggage than Bill, Alcide, Sam and Eric combined. Frannie, his half sister and most of all his crazy whackadoodle mother have an inordinate hold on John’s time and attention and that does not seem like it will ever change. None of it was of his making but because of his family history and his sense of duty, Sookie feels like she is third on his list and she won’t settle for being less than first.

Are We Missing Any Suitor? Let Us Know Below!