EMBRACING THE DARKNESS WITHIN. 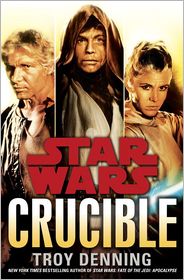 When Lando Calrissian asks Leia and Han Solo for help in running off some pirates from his mining operation, little do they suspect they are about to fall victim to a brotherly pair of sociopaths — two brain-heavy Columi power mongers with access to an evil force, and in whose blood-stained crucible lies burning a cruelly refined vendetta against Han.

Ten Star Wars novels were published between 1976 and 1983, more or less concurrent with the original film trilogy. Therein followed a bewildering period of nothingness — George Lucas effectively freezing himself in carbonite — until 1991 when Timothy Zahn’s Heir to the Empire released from its singularity a rapidly expanding universe of original Star Wars books, of which Troy Denning’s Crucible is at the outward crest. The Star Wars canon nowadays is vast and intricate, yet well charted, and novices of the Jedi order are well advised to consult Wookieepedia rather than trusting to the Force when embarking upon a voyage through the swirling asteroid field of publications. Crucible, however, is something of an exception to this guiding principle, and despite its story unfolding some forty-five years after A New Hope, in many ways it echoes this founding movie in offering a sweeping yet self-contained adventure, accessible no only to zealots but also to more casual fans.

Denning structures his writing around the immutable figure of Han Solo, so although much has changed in the four decades since Return of the Jedi — Leia has become a Jedi, for starters, and Luke Skywalker has matured from nasal adolescent to grandmaster of the order — most readers will find themselves comfortably ensconced from the outset (a sit-down standoff at a seedy bar, of course), and then drawn into a well-paced plot that includes both familiar faces and evocative new villains. Within a series where Chewbacca was killed off so as to restore a lost sense of vulnerability to the old favourites, Denning’s great achievement is that he is able convincingly to set aside — through nothing more than astute narrative — the ingrained expectation that our heroes will prevail. The Jedi here are not all-powerful. The bad guys are disquietingly, almost dishearteningly clever. Nobody in Denning’s writing is bulletproof; and although one must suspend more than a pinch of disbelief that Grandfather Han (in particular) is still able to keep up with the action in pretty much the same way we remember him from forty-five years previous, even he seems to be running less on roguish bravado and more on some telling variant of fatalistic abandon.

There is less flippancy, less lightness, in Crucible than in many other Star Wars novels, and maybe this will disappoint some fans; yet, perhaps also the grandiosity and kitsch of big screen space opera has taken A New Hope — which at heart remains a dark fable — and retrospectively bestowed upon it an oddly comic veneer that plays tricks with our memories. Certainly, the gravitas with which Denning approaches his story allows us more fully to appreciate the depth of what already were murky nebulae, and in particular to feel — and not merely assign to cliché — the ‘happily ever after’ romance that has aged to classic vintage within the persons of Han and Leia. Crucible sees the familiar characters all grown up and now plunged into situations that, while intrinsically no more harrowing than those of the original trilogy, carry with them a grittiness that is becoming both of the intervening history (be it read or unread) and of the inevitable accumulation of life’s many barnacles. It is, in short and no pun intended, a tour de force.

When Han and Leia Solo arrive at Lando Calrissian's Outer Rim mining operation to help him fend off a hostile takeover, they join forces with Luke Skywalker to confront a dangerous adversary with evil intentions and a vendetta against Han.