Star Wars: The Force Awakens – Movie Review.
The Force awakens beat box office records. Most would attribute this success to the franchise itself.

The INSANE hype over the newest installment certainly helped. With the branding of everything from lunch boxes, fishing poles, and even toasters, this particular film became more than just a movie. There almost seemed to be a requirement set by society to see it. It lived up to the expectations with a fresh plot and the perfect balance of nostalgic characters intermingling with the new stars.

The Force has awakened, and it rolled right out of bed and impressed us with flashy good fun. Unlike Yoda, this story didn’t need to hit the snooze button even once. Maybe that’s too many waking-up-with-the-Force-in-your-cup metaphors, but I’m too excited to turn back now. The Force is up! An object in motion continues in motion! Besides, coffee’s on.

One of the best things about Star Wars: The Force Awakens is that it made good on all those promises in the new canon material. The galaxy is a diverse and marvelous place, with as many women in leadership positions as men. And POC (people of color–not just white folks) exist!

There are Black Stormtroopers and senators, Latinx and Asian pilots with the Resistance, and more. This should not feel like such a miracle, but it does and I’m grateful Star Wars found its way to a more realistic and engaging vision of the galaxy.

The Force-using desert scavenger with a mysterious past and possible connection to the Skywalker family. 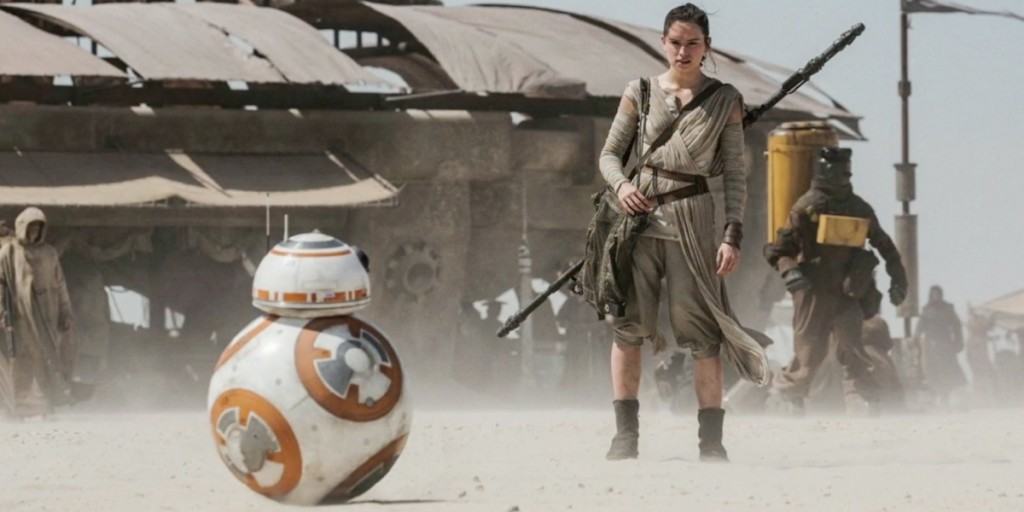 After her parents abruptly left her, Rey grew up in the slums of the desert planet Jakku. She earns her food as a vehicle parts scavenger. Even though after years of not hearing from them, Ray still holds onto the hope that her family will come back for her.
Everything changes when she saves a lovable droid, BB8 from being sold for parts. Unbeknownst to her, this droid holds the last piece of a map to Luke Skywalker‘s exact hideout location. Wanted by evil First Order, she finds herself in the middle of the Resistance fight against The First Order.

Formerly FN-2187, soldier and deserter who moves through terror to courage and stands up when it counts. 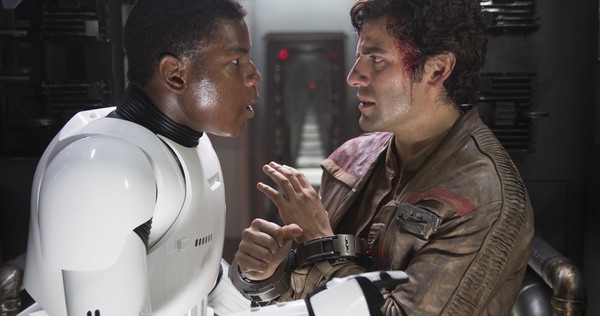 Stromtrooper FN-2187 was a human male who served the First Order after being taken from his family at a young age.
The systematic brainwashing failed to work on him and his main goal was to escape evil and life his life freely.
An opportunity finally presented itself in the form of captured pilot Poe Dameron. Once the two escape, Poe bestowed on him his first real name – Finn. This was the start of Finn’s involvement with Resistance.

A damn good pilot with possible queer subtext who stole every scene he was in. 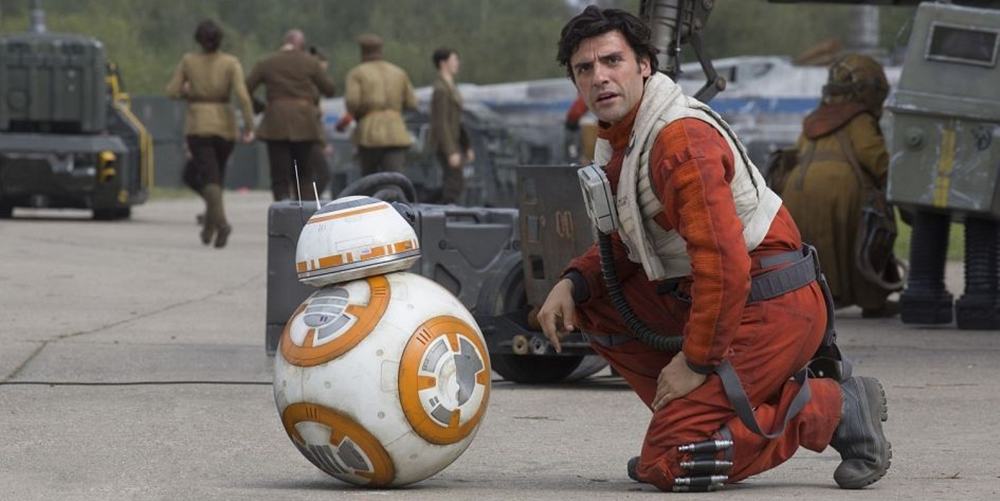 As General Leia’s most trusted operative, she sends extremely gifted pilot – Poe Dameron on a mission to retrieve the missing piece of the map leading to her brother, Luke Skywalker. When he is captured by the First Order, he entrusts the map with his droid, BB8 stranded on Jakku, but saved by Rey the scavenger

They meet and meld and break apart, the perfect combinations for a rollicking adventure tale with the power to enthrall every audience. (Especially children looking to see their own faces reflected in their heroes, who could not find them in the original trilogy.) These three effortlessly pull us into a comedy of errors that leads to a scavenger hunt of galactic import.

Kylo Ren is determined to finish what his Grandfather, Darth Vader started. His main goal is to destroy the Republic and all Jedi.

I’m sure we’re meant to think of Kylo Ren as one part of this new core trio, especially considering how little screentime Poe has compared to the other characters. In fact, I’m sure we were meant to be a lot of things by Kylo – excited, impressed, consumed by a desire to dress up as him and own his toys.

The marketing machine really screwed up on that one, though, and maybe should have checked in with J. J. Abrams and Lawrence Kasdan a little more.

Really, Kylo Ren is nothing but a sad, spoiled brat.

Kylo Ren is clearly meant to be a pathetic shadow of his idol Darth Vader, a petulant child who throws temper tantrums and is frankly the diet soda of Dark Side Force users. Honestly, the best thing to come out of Kylo Ren‘s existence in The Force Awakens is the parody Twitter account @EmoKylo.

Speaking of characters that wildly missed the mark, don’t even get me started on Captain Phasma and expectations vs. reality. Let’s just say that they better fix her in Episode VIII.

The entire film also manages to be one long ode to nostalgia, which was both a delight and The Force Awakens‘ greatest weakness. As everyone saw in the trailers, we witnessed Han Solo and Chewbacca reunited with the Millennium Falcon – a scene potent enough to give me soppy chills even as I type this.

We got to see Han and Leia together again, as confusing as the evolution of their relationship wound up. We even got to hear Yoda and old Ben Kenobi again, speaking to Rey through a Force vision. And, of course, we watched C-3PO and R2-D2 (to an extent) being as funny and helpful as they’ve always been.

The problem, of course, lies in how they DIDN’T differentiate the story from Episode IV: A New Hope. 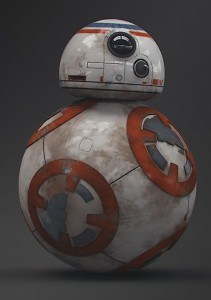 Meet BB8! Not only is he adorable and hysterical, he is the primary protector of the all-important map.

We follow our heroes through the same story: a hunt for missing information, a sudden death between men in an estranged paternal relationship, a scavenger on a desert planet discovering a hidden destiny, a planet-sized laser that blows up other planets, and so forth.

We aren’t given enough information about the First Order to truly differentiate it from the shattered Empire, or how and why the Resistance exists opposite the Republic built from the former Rebellion. There were many inexplicably missed opportunities to provide a truly informed view of this new galaxy, which is another thing we can only hope will be shown to better effect in Episode VIII.

When all’s said and done, however, The Force Awakens was worth all the hype.

It’s beautiful, exciting, and incredibly fun with just enough painful downbeats to lend it an edge of aching pathos. This is the continuation of a Star Wars canon I’m proud to be a fan of, and I’ll be pre-ordering my tickets for Rogue One and Episode VIII just as early as I did for The Force Awakens. See you there. 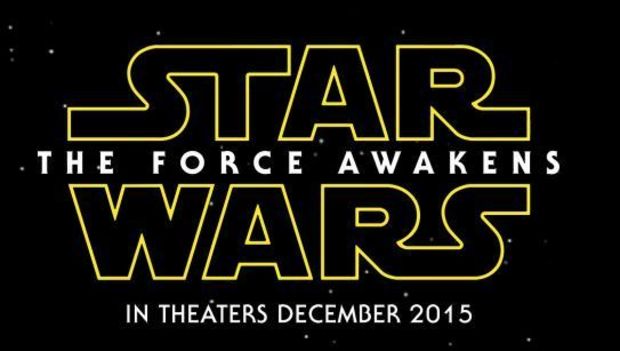 Article Name
Star Wars - The Force Awakens - Movie Review
Description
. The Force Awakens lived up to the INSANE hype with the fresh plot and mix of nostalgic and new cast of characters. Worth seeing over & again.
Author
Deborah J. Brannon
BuzzyMag.com