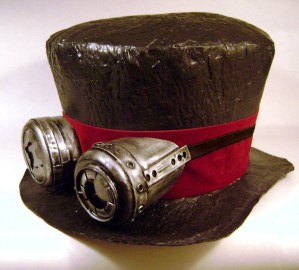 Let me begin by saying I will concede the point I could be wrong with everything I am about to say. I know there are folks who will not only disagree with me but will do so strongly. I fully expect to see a lot of comments telling me how wrong I am, and I am looking forward to the debate so long as you are respectful in how you express your point of view. Here goes:

I don’t get Steampunk. Not at all. Not even a little bit.

And by “steampunk” I am including “clockwork” under that umbrella.

Folks try to explain the genre to me by referencing Jules Verne, but as soon as they do so, I cannot validate their argument. Jules Verne was one of the founding fathers of science fiction. Looking back on his work and planting the steampunk flag there while making the declaration “that’s steampunk” does not make it true. I could hold up a rose and say, “this is a chocolate chip cookie” and eat it, but it’s not going to taste delicious-trust me on this. I don’t think anyone who has read 20,000 Leagues Under the Sea, or seen any of the movie adaptations thought “wow, that’s good steampunk there!”

I will go out on a limb and make the statement that steampunk is not a genre; at best it is a fashion movement, one I highly approve of. I love the look of brass buttons on black wool military jackets and brown leather bodices laced up with red ribbons. Handlebar moustaches and fluffy beehive hairdos are both equally neat, even if the same person is sporting them both. But clothing does not a genre make. To me, a genre is something that is clearly defined, classified, and has established “rules.”

Can I clearly define to you what those rules are? No, I can’t. However, I feel there can be good fiction with steampunk elements to them without having to classify it as steampunk. For example, I feel the Vampire Empire books are a good example of steampunk because in spite of the fashion, in spite of the technology being used, in spite of the heavy British accents, the story is not dependent on all that glam and glitz. Take away the dirigibles and clockworks and the story of Adela and Gareth is still there.

For example, if I were to take the Shakespearian classic Romeo and Juliet and add muttonchops to the men and put the women in jodhpurs, this fashion adjustment would not make the story an instant steampunk classic. Machines that hiss and whistle and are replete with gears for the sake of gears is going to make your environment a steampunk world because it’s just window dressing; nonetheless, doing so only begs the question “so what?” A thing has gears and runs on steam, what’s the big deal about that, why is it important to the story? Tell me, why I should care.

In my opinion, steampunk is more of a setting than a genre and I believe this idea comes from the concept of a truly technologically developed Victorian era, a world where mankind reaches steam-power with the ability to have replaceable machinery parts-and then never moved forward. Neat and in some respects even conceivable, yet it never fails that in these same stories the authors then want to capture the sense of adventure and discovery that was rampant in the upper class of Victorian England at the time.

I suspect my real problem with the idea of steampunk is its feasible reality. I’m thinking while the noble British main character of the story is off in his dirigible, some Yank overseas is making a bigger, better, safer engine fueled by diesel gas. It’s logical that if geographic discovery is inspired and encouraged, then other sciences would be explored, not just the deepest parts of the interior of Africa. Galvanization is the science of using electricity for health benefits. It was dabbled with back in the day, applied to the corpse of a frog to temporally animate the legs and simulate life. Is it not possible then, in a world of scientific breakthroughs and wonderment, that electricity would be more thoroughly explored and eventually win the day just like it did in real life? I cannot see a steampunk world existing, because I cannot fathom man reaching that level of advancement and then deciding to close the patent offices and wallow indefinitely in a steam powered world.

And since I did not digress earlier on, I will do so now.

I think the origin of the word “steampunk” can be traced back to the word “cyberpunk,” which appeared in the 1984 William Gibson book “Neuromancer.” If memory serves me correctly (and truth be told, it may not), the phrase “cyberpunk” was used to describe a person who had a lot of cybernetic attachments, but these gizmos were not necessarily improvements upon the human form, like having a cyber-knife. Yea, you have a built-in knife, but you could also just carry a knife on you. Ergo, “steampunk” to me screams lots of wood and brass fashioned into a Rube Goldberg cascade, chain-reaction device, where over-engineering and a plethora of gears make a simple task highly complex.

I already know that Wikipedia, the best source of trivial knowledge available to anyone with access to the web, (citation needed), offers a different origin of the word “steampunk.” I just happen not to agree with Wiki on this one.

Also, there was a role-playing game that came out in the late 1980s called “Cyberpunk” that was deeply inspired by the Gibson books. The game took place in a futuristic dystopian society where cybernized people worked both for and against the mega corporations. The game’s motto: “Style over Substance.” If you like the idea of double-crosses, hyper violence, and intrigue but want to do so in a steampunk environment, there is a game called “Space: 1889.” Each game has its own set of core mechanics you’ll need to know before playing.

So there you have it, steampunk, albeit cool and fun, in my opinion, is not a genre. All I ask of authors is if they are going to set their story in a steampunk environment they give me some reason for the steam and clockwork, no matter how thin it may be, so that I can suspend the bubble of disbelief and enjoy the story for what it is-a good story.