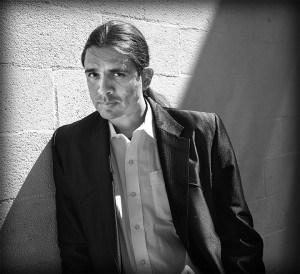 If you read my review here of Stephen Graham Jones‘ newest short story collection, After the People Lights Have Gone Off, you might have detected my love for it. Further, you may have picked up on my overwhelming affection for Mr. Jones and more or less the entirety of his work. Also, he’s damn handsome.

Turns out, he’s also a good and decent human being who responds to unsolicited requests from reviewers he’s never heard of. When I reached out to him for an interview, not only did he get back to me immediately, but he actually sounded excited at the prospect. I think it’s fair to say my excitement far outstripped his, though. It was fantastic to sit down with Mr. Jones (via email) and ask the burning questions that only occur to weirdo fans like me.

B.O.: Your website says “The only genre is fiction” but most of your work tends toward the creepy, the weird, and the spooky. Not that I’m complaining; those are some of my favorite things. Are you drawn to that? Do you ever feel like a genre writer or are you just telling stories that happen in the dark?

[easyazon_block add_to_cart=”default” align=”left” asin=”1940430259″ cloaking=”default” layout=”top” localization=”default” locale=”US” nofollow=”default” new_window=”default” tag=”buzmag-20″]Stephen Graham Jones: I like that, “stories that happen in the dark.” I suspect that’s probably it, yeah. I mean, if I’m any kind of writer, then I’m a horror writer, yeah. But I’d really consider myself more just a writer with tastes and predilections all over the place, who usually ends up writing horror. And, of course I’d be proud to be considered a horror writer, definitely. I try science fiction a lot, but usually I end up writing a horror story set in space. Same with fantasy. Just because, to me, horror is the most honest genre, the one seeping underneath all the rest, and bleeding through.

B.O.: Do you dig genre stuff? Are you into horror, scifi, mystery, and crime, whether fiction or film? There are elements of all of them in your work. I’m just wondering if you’ve been deeply influenced by the things you read and watch.

Stephen Graham Jones: Very deep influenced, yes. Times ten. Check [easyazon_link asin=”1596921641″ locale=”US” new_window=”default” nofollow=”default” tag=”buzmag-20″ add_to_cart=”default” cloaking=”default” localization=”default” popups=”default”]Demon Theory[/easyazon_link], say. Or even my first novel, [easyazon_link asin=”1573660884″ locale=”US” new_window=”default” nofollow=”default” tag=”buzmag-20″ add_to_cart=”default” cloaking=”default” localization=”default” popups=”default”]The Fast Red Road[/easyazon_link]. More and more, I think, media is becoming the landscape of reality. Or for it. Or it’s supplying the contours, anyway. It definitely does for me. And, yeah, I read all over the shelves. Just finishing up Ready Player One, soon to start Joe Lansdale’s Prisoner 489. Last book I read, I think, was The Best American Short Stories 2014, edited by Jennifer Egan. Last magazines: Fangoria and Wired. Last two movies I watched were Witching & Bitching and Hostile Witness. Last TV was Brooklyn 99 and STNG. With food, say? I so, so prefer to eat the same thing every day, the more boring and spiceless the better. Same with clothes: I just want twenty of the same shirt, please. But with books and film and music, got CSNY on now, but today I’ve listened to “Milky Dream” and my classic country Pandora stations my intake never tracks. I never can predict the next thing, not based on the last thing.

Stephen Graham Jones: A Blue Angel pilot, yeah. And then I wanted to be Conan. And then Conan-on-a-ship. And then I just wanted to be cowpoke. And then I thought maybe an architect, or a singer? Then I wanted some Wolverine boots and a sword. Finally I settled on being a custom farmer. Except then I got all tangled up in studying philosophy, which led me fiction, and here I am. First story I wrote was at nineteen, in an emergency room. Haven’t been able to stop since.

B.O.: Many writers say they’re compelled to write, rather than just doing it because they love it. I’ve read a few of your pieces on why you write and you seem like you fall into the compelled camp. Would you agree?

Stephen Graham Jones: Definitely. Never inspired, always compelled. If I don’t write, then I end up sitting somewhere late in the day, my fingertips tapping out at keys that aren’t there. Seriously? Sometimes I think that I only write because I have all these nervous muscles. Writing allows me to focus them in one place for hours at a time. Really, though, I think I write to try to make the world make sense. Because it doesn’t. It never does. But, for twenty or thirty pages at a time, I can sometimes pretend.

[easyazon_block add_to_cart=”default” align=”left” asin=”1938604539″ cloaking=”default” layout=”top” localization=”default” locale=”US” nofollow=”default” new_window=”default” tag=”buzmag-20″]B.O.: What’s a typical day like for you? I know you teach at the University of Colorado but your fiction output is still prodigious. How do you get it all done?

Stephen Graham Jones: I also teach in the MFA program at UCR-Palm Desert. And . . . I don’t know? I just like to write, so I do it every chance I get. And a lot of chances I’m not really getting, I’m stealing, I’m having to make myself. But it’s not because I don’t draft. Man. Just Friday I wrote this seven thousand-word story I have on deadline, but got to the end and realized the whole thing sucked. So then I had burn up Saturday and Sunday afternoon writing eight thousand different words. But now the story works. I can’t let myself submit anything that doesn’t. Also, though, I don’t claim to be the expert, necessarily. Just, I know when I’m writing junk.

B.O.: Is it difficult to juggle these two careers? Have you considered leaving teaching behind and writing full-time?

Stephen Graham Jones: I don’t know if I’d ever completely leave teaching. The students, they’re so smart and engaged. And, they keep my mind hopping. They make me articulate things I just kind of know at the instinctual level. And, hearing myself saying them, it changes me as a writer. It challenges me to break this rule I just laid down. And I don’t only teach writing. I get to teach comic books and the slasher and the haunted house and the zombie and the werewolf. So odd to get paid for getting to talk to a roomful of people about werewolves. Such a dream. I keep thinking somebody’s going to say, Hey, hey, wait, this guy’s getting away with something, isn’t he? Yes, I am. Shh.

B.O.: How do you feel about things like Facebook and Twitter as they relate to modern writing careers? It’s become pretty critical for a writer to have a robust social media presence in order to look appealing to many publishers. Do you think this is a necessary evil? Does it allow more unknown talent to slip through the cracks? What are your thoughts on having to generate posts and status updates and photos and tweets in addition to the actual business of writing?

Stephen Graham Jones: From what I understand, yes, the publishers say they want you to have a social media platform, by which I think they just mean ‘outlet with two million subscribers’ or followers or friends or whatever. But I’m not for-sure that the data stacks up that being active on social media translates to book sales. Really, I think writers are just sitting here anyway, then we hit one of the ten thousand walls waiting for you in any project, and, instead of figuring a way around it, we tab over to social media, get to feel like we’re still making some sort of forward progress. Our fingers are moving, right? It feels like writing. I mean, I play on social media, but I don’t necessarily see it as career-oriented. It’s just that I don’t get out all that much, given my druthers. And the reason for that is probably that I still say things like ‘druthers.’

B.O.: I’ve been addicted to horror for almost thirty years. I’ve read hundreds of different authors and only a handful have stood out as blazingly original. Clive Barker and Joe R. Lansdale are two of my favorites because no one writes like they do. But your work immediately choke-slammed me to the floor. It’s truly something I’ve never experienced before. Your voice is unique, your style one of a kind. How in the hell do you do that? It takes a lot of work to stand out these days but you manage to make it sound effortless.

Stephen Graham Jones: Thanks. And . . . I don’t know? I just write. Sometimes I wish I could sound more like other people, writers I respect. But, really, I can only do what I can do, finally. And whatever I do, it’s just some mashup of all my education and all my reading and all my experiences and tastes and all of that. Same as it is for any of us. I never set out to stick to a certain voice or mode, though. If anything, I guess I try not to become a one-trick pony, just churning out the same stuff over and over. I mean, sure, we all only have a single or maybe, at most, two stories to tell. But it’s all about how you dress them up. I get mine out every day, dress them up in the most outlandish ways. And then some days they just stand there naked, staring at me. So, I don’t know: back where I started, I guess. I just write the only way I know to write. My plan is to someday be better at it, too. Every story, every novel, I’m trying. 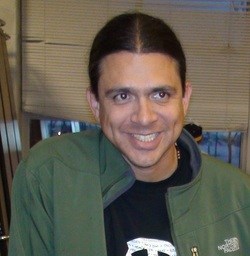