This brief science fiction story deals with the nature of reality or at least perceived reality. Is there a future Omega point where humanity taps into a source for new ideas or should you really take the blue pill? 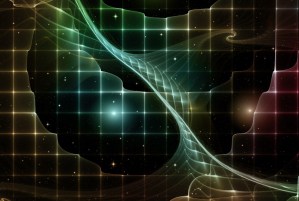 It’s been this way all of my life. Like when I was in high school, and we’d be reading our homework assignments out loud, and some kid would stand up right before me and read pretty much what I had written. Not that he’d cheated or anything. I never showed my work to anyone. And yet he’d written my ideas, even using my words. I had a hard time proving that I wasn’t the cheat. “Great minds think alike,” the more enlightened among my teachers would say. But that was too pat. I knew something else was going on—I just didn’t know what.

It happened on the radio, too. I’d be singing a song, driving somewhere, and I turn on the radio and that very same song was playing. Yeah, I know that they played the Beatles a lot back then—still do on the oldies stations I listen to—but I mean, the Beatles have a pretty big catalog. What was the likelihood that Dr. Robert was on the radio right after I’d been singing it?

When I got to college and grad school, I began to search for similar patterns in history. There were plenty. Alexander Graham Bell and Elisha Gray invented the telephone, independently, at the same time. Pretty much the same for motion pictures—invented independently by Edison in the U.S., Friese-Greene in England, and the Lumière brothers in Paris. And of course Alfred Russel Wallace came up with a theory of natural selection all on his own, at the same time as Darwin.

I was starting to put together a dissertation proposal on this very topic, when I came across an article published in an obscure journal—“On the Ubiquity of Independent, Simultaneous Invention.” I was crushed, but not really surprised. I left the doctoral program and took a job in my uncle’s shoe store—I was in de feet, ha ha.

It was not that bad, though. I had no talent for shoe sales, so I wasn’t vulnerable to the trauma of someone else coming up with my ideas. No danger of someone stealing my notion of a better display case, because I wouldn’t have had that dumb idea in the first place. That was a relief. I went along like that for a good few years.

But the job also gave me lots of time to think and look around the Internet on my phone when there were no customers in the store. I began looking into quantum mechanics. Some scientists thought that just thinking about subatomic things was enough to affect them, and that our mentalities might actually be in touch in some way with the past and the future, through some kind of time-unified quantum mechanical field. Maybe I and all the people who seemed to co-opt my ideas were connected to some future Omega point, the Platonic source of all ideas!

And sure enough, a few hours after I came up with that hypothesis, I found a book on Amazon on the exact same topic by some physicist I’d never heard of.

No problem. I should have known. Better to sell shoes. Yes, ma’am, we do have that style, and right in your size.

But the urge to break out of this is still strong, and I recently came up with another plan. Science fiction. Maybe if I presented what I know about this synchronicity not in a science book, but in a little science fiction story published somewhere online, it would slip under the radar. If it was not known in the future, maybe the quantum mechanical effect would keep it unknown to anyone but me until after it was published now, in the present. Lots of big ideas began with science fiction—Asimov and his robots, Verne and his submarines and rockets to the moon, right?

But I would have to be careful. Better not to think about this story too much, lest it make the synchronic leap. Better just write it and send it out.

But if I did, how could I be sure that the act of writing my little story and emailing it to a suitable online magazine wouldn’t trigger someone else writing the same story and getting it to the magazine right before mine, with the result that that story about synchronicity—not mine—would be the one that was published?

Paul Levinson is the author of six science fiction novels - The Silk Code (winner of Locus Award for best first novel of 1999), Borrowed Tides, The Consciousness Plague, The Pixel Eye, The Plot to Save Socrates, Unburning Alexandria – as well as more than 35 stories, many published in Analog, and several finalists for Nebula and Hugo Awards. He was President of the Science Fiction and Fantasy Writers of America, 1998-2001, and is also the author of 8 nonfiction books, translated into 13 languages.