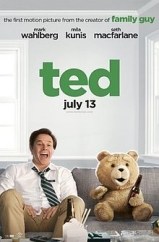 I freely admit that I walked into this movie with no expectations at all. I’ve never watched “The Family Guy“-it was like going to a class
where you hadn’t done the required reading . . . .

Ted is being marketed as a rauchy/cute fantasy film, rated R for sexual content, bad language and drug use. It’s aimed primarily at the boys (their girlfriends will be next door watching Magic Mike)-the trailers playing with it were a mix of low-brow comedies and high-octane action-adventure films.

This one is narrated by the always awesome Patrick Stewart, who is marvelous at pulling off dialogue that takes odd twists and turns without any sign of flinching. The first weird bit (during the opening monologue) was so successful it almost got past me-then suddenly I found myself thinking “What did he just say?”

Ted pokes fun at everyone: there’s political humor, racist humor, [lots of] locker room-type humor, stoner humor, sex humor, and even furnish-your-apartment-at-IKEA humor. And it’s all mixed up with blaming everything wrong in your life on the economy and 9/11. Apparently there is absolutely nothing that Seth MacFarlane won’t poke fun at. Ted himself is a great character, and the combination of motion-capture and CGI is used wonderfully-you almost believe a stuffed bear could come to life. And that he would never grow up.

It’s full of references to your favorite 1980s films: Flash Gordon, Airplane, Aliens, Top Gun, and others, despite the fact that the prime audience for the movie probably saw them on TV or DVD instead of in the movie theater. There are some really fun cameos, too. Basically, the entire movie feels like one big inside joke-not two minutes go by without another pop culture reference.

Mark Wahlberg does a lot with the material he’s given-playing an unambitious guy in a going-nowhere job–Ted is as watchable as it is because of his performance. Giovanni Ribisi shows a lot of range and is downright creepy. The rest of the cast is really hard to judge-the characters they’re playing are one-dimensional at best. Mila Kunis has shown in the past that she can act, but she just isn’t given much to do here, other than look pretty and be the victim of her boyfriend’s bad decisions.

For me, the movie just lasted too long. I found it mildly entertaining, but the premise wore thin after the first hour, and there just wasn’t enough going on to keep me engaged. I think this one might be a Saturday night-after-you’ve-been-drinking-and-you-don’t-want-to-think-too-hard movie.

But it had its moments. For sure.

Article Name
Ted Movie Review
Description
Ted is being marketed as a rauchy/cute fantasy film, rated R for sexual content, bad language and drug use. It’s aimed primarily at the boys (their girlfriends will be next door watching Magic Mike)-the trailers playing with it were a mix of low-brow comedies and high-octane action-adventure films.
Author
Elektra Hammond
BuzzyMag.com