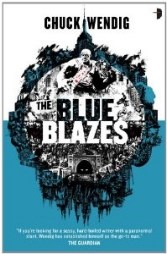 Chuck Wendig has done something special with The Blue Blazes

. Seamlessly blending urban fantasy, crime noir and artisanal butchery, The Blue Blazes is one of the best books I’ve read in a very long time. It’s an exciting twist on the normal urban fantasy tropes, one that breathes some new life into UF’s??? blood-drinking corpse.

is, it wouldn’t be even half what it is without its protagonist Mookie Pearl; a massive slab of a man. Mookie keeps himself busy busting legs and faces for the book’s equivalent of the mob, The Organization. The fact that those legs and faces don’t often belong to human beings is what makes Mookie special, and he’s well paid for what he does.

Make no mistake, Mookie Pearl is a bad guy and The Organization are even worse, but they’re also New York City’s only defense against the very literal hell that’s been found beneath the city. When the Great Below raises its head, Mookie Pearl smashes it back down again.

To even see the underworld and its creatures, Mookie uses an addictive drug carved out from inside the underworld itself. Known as Cerulean, or just Blue, the ground up mineral formation rips open your third eye, makes you super strong and gives you the feeling that you could punch out Satan without too much trouble. Mookie uses Blue, and he also mines it and helps The Organization to control its supply. Powerful as Blue is, there are rumors of even more exotic compounds deeper within the labyrinth of the Great Below and Mookie is tasked with finding one of them.

Part of what makes Mookie so great as a character is that even though he starts off as a guy you’d cross the street (and possibly leave the country) to avoid, he’s striving to be a better man. He wants to be a better father, a better person and a good friend. At the same time he’s fiercely loyal to The Organization and his own personal code. As The Blue Blazes goes on Wendig skillfully plays out Mookie’s story arc through the characters he interacts with.

There are hints of Lovecraft in The Blue Blazes, and the most horrifying incarnation of goblins I’ve ever come across, but most of all The Blue Blazes is its own thing. Fun, fast, deep and superb.

Criminal underworld? He runs in it.

Supernatural underworld? He hunts in it.

Nothing stops Mookie when he's on the job.

But when his daughter takes up arms and opposes him, something's gotta give...