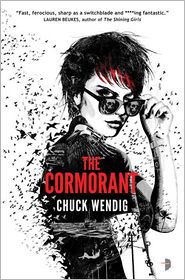 I’ve made no secret that I’m a fan of Chuck Wendig’s work, and his Miriam Black series in particular, so I was always going to like The Cormorant. It’s the third book in the Miriam Black series of books about a woman who knows exactly how you’re going to die. What came as a surprise though is just how good The Cormorant actually is; much as I loved the first two books, Blackbirds and Mockingbird, The Cormorant is truly something special.

Miriam Black is in a bad place when the book starts. Her battles with the forces of Fate have left Miriam alone in the world, too frightened to be anywhere near her friends because of the destruction that follows Miriam wherever she goes. No longer content just to coast by while the people she meets die, Miriam has learned that she can save people from their predestined deaths as long as she’s prepared to take a life herself. Wendig handles this change in Miriam’s relationship to her supernatural abilities flawlessly, and like any good change in the series it casts the previous books in an all new light.

In The Cormorant Miriam is very much the pivot point that everything moves around. She’s a fighter in every sense of the word, as at home in street fight as she is arguing with the few people in the world still will and able to help her out. Miriam is an amazingly layered character. She’s not just a cardboard cut out, she can be both strong and weak. Smart and stupid. Powerful and powerless. She’s tough without that being her only defining characteristic. This means that for all that Miriam can be a vulgar mean spirited person she’s also relatable and likable. She has an undercurrent of humour running through her narrative that gives The Cormorant some much needed lightness, because when thing go bad for Miriam, the go really bad.

Wendig doesn’t hold back on the horror that he throws at Miriam. She’s been pushing against powerful forces in the universe, and to paraphrase another character in the book, now something is pushing back. For all that the series deal with powerful even abstract forces, he keeps the threat to Miriam grounded in a very human villain. This makes the antagonist far more dangerous, not less. I don’t want to spoil who the antagonist is, but if you’ve read the first two books you might be able to figure it out just before Miriam does.

This book isn’t for the faint of heart, the violence is brutal, not necessarily due to the gore, but because it feels very real. Any and all violence in The Cormorant has the weight of consequence behind it, so when the body parts start flying it doesn’t seem cartoonish, instead it seems like a nightmare the reader is trapped in with Miriam. In the same vein, Wendig is very good at imbuing side characters with a life of their own so they feel like they have their own lives to get back to once the story is finished with them.

If there is any fault with The Cormorant it’s that it really needs a reader to have read the first two books to have the right impact. That’s the only problem I could find with it, and since the first two books in the series are fantastic in their own right it’s not really a problem.

Miriam is on the road again, having transitioned from "thief" to "killer".

Hired by a wealthy businessman, she heads down to Florida to practice the one thing she's good at, but in her vision she sees him die by another's hand and on the wall written in blood is a message just for Miriam.