The Devil You Know by KJ Parker

Novella Review – The Devil You Know (a companion novella of sorts to Downfall of the Gods) is a quick read. Parker’s writing is conversational and her story engaging. 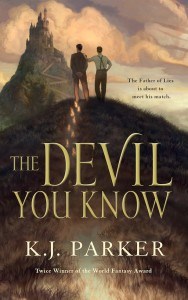 BETTER, OR BETTER THAN?

The notion of selling one’s soul has enthralled and enticed for as long as we’ve conceptualized an entity fiendish enough to take receipt. Faust is the most famous pact-maker, and the one whose tale Parker reworks. But there have been countless others. Terry Pratchett told of Faust Eric. Tom Holt (Parker’s bearded alter ego) wrote Faust Among Equals

, an escape from hell sequel. Now Parker has given her own sardonic if breezy take on the matter. The Devil You Know

— a companion novella of sorts to Downfall of the Gods — renews the age-old battle of wits between man and devil… with of course Parker’s trademark skewed perspective.

Charged with executing the contract is a culturally refined but unnamed demon (call him Mephistopheles); an art lover and longstanding admirer of his latest client. The man trading for damnation is Saloninus, the world’s greatest philosopher but a sophist whose penchant for trickery may well surpass that of the Father of Lies himself. The inversion of roles is highlighted by Parker’s switching between the two characters throughout her first-person narrative; the manner in which they perceive themselves and each other feeds back into the moral ambiguity of their respective machinations. Who is really the (anti-)hero and who the villain of the piece? Protagoras — true history’s first sophist — would surely have approved.

The Devil You Know is a quick read. (At a pinch you could polish it off while on hold and contemplating that particularly ill-advised agreement you entered into with your phone and internet service provider.) Parker’s writing is conversational and her story engaging. The only qualm that might bestill the sails of appreciation is a nagging thought that Mephistopheles’ power, so wantonly placed at Saloninus’ disposal, could have been curbed somewhat without much altering the scenario. But similar misgivings come part and parcel with the original Faust legend; they don’t detract significantly from Parker’s wry musings or the wicked twist in the tale.

As with Downfall of the Gods, some readers will question the value for money in purchasing a standalone novella, particularly as Parker also writes quite lengthy novels at not much greater a price. Perhaps we should liken book publishing nowadays to the popular music industry, which started with vinyl singles, progressed to LPs and has recently come full circle with single song downloads. Yes, there is an art, an indisputable majesty to a long-playing Parker novel — these are her concept albums, her Dark Sides of the Moon — but the short form also has its place; her novellas are those chart-toppers that hook you at the first page and become instantly memorable in exploring their point.

Record deals aside, a pact with the devil is traditionally entered into with a view to gaining time. It is an exercise in putting off the inevitable; forestalling the ephemeral from inopportune demise. Concomitant with this is the drive to finish off some great work or other, in Saloninus’ case a universal theory based on scientific observation and mathematical representation (which by the by would disprove the existence of those he’s making the deal with). Saloninus bargains for twenty more years, while from the tone and preponderance of his pseudonymous work it is just about possible to imagine that Tom Holt negotiated something similar when he brought K J Parker into existence back in 1998. If so, we should give thanks while partaking of the fruits of his indentured labour, and hope for a loophole commensurate of our enjoyment.

Remembering that Holt was once a solicitor specialising in death and taxes, we should also keep our fingers crossed and check with The Devil You Know

to see how the story ends. 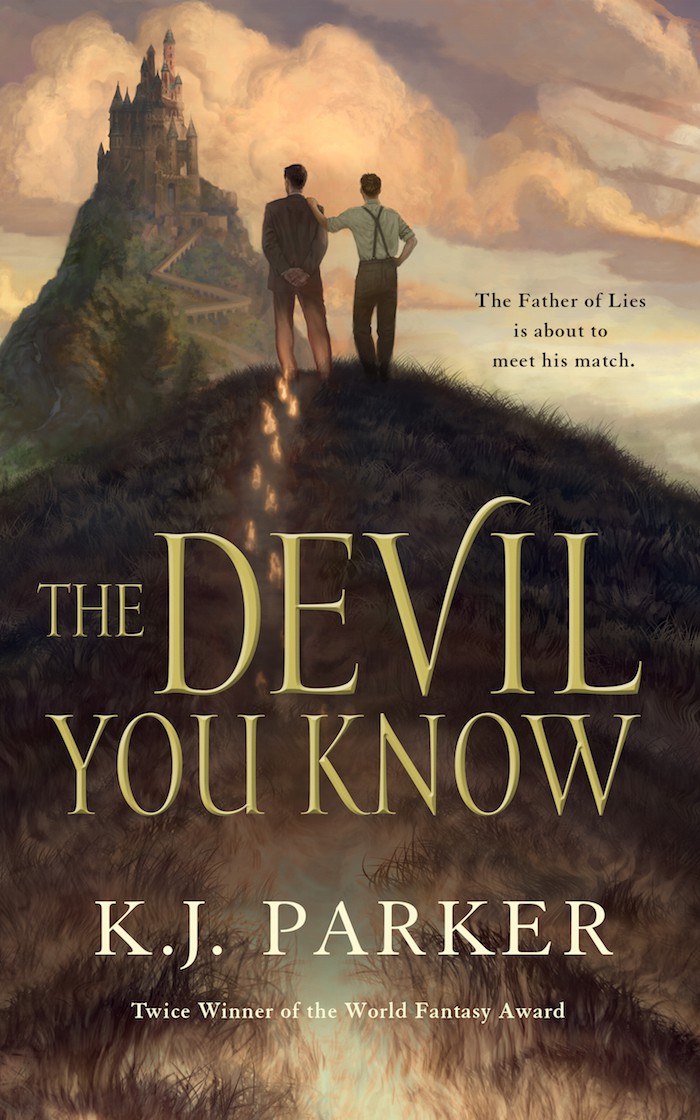 The notion of selling one’s soul has enthralled and enticed for as long as we’ve conceptualized an entity fiendish enough to take receipt. Faust is the most famous pact-maker, and the one whose tale Parker reworks.