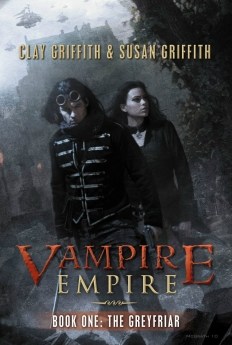 The Greyfriar
by Clay and Susan Griffith

In the 1870 of a world very much like our own, vampires emerged from the shadows to conquer most of Europe, Asia and North America. Vicious and evil, the north’s new overlords farmed their human prey like cattle, destroying their humanity, as well as their civilization.

But humans weren’t finished yet. Those who could fled to the tropic climes the vampires shunned and built a steam-powered version of the lives they left behind. Fifty years later these reconfigured human states eye their northern enemies with new calculation. The world teeters on the brink of a global war of reconquest.

The Greyfriar is pulp adventure at its best. Think Zorro with vampires. Add to the mix the conflicting but equally Byzantine politics of multiple human and vampire nations, and a crew of mysterious mystics. Season with appealing protagonists, a full measure of steam-driven gears and rocket-powered pacing, and you’ve got the recipe for my favorite kind of mind candy. The Griffiths pulled me so deeply into their world, my few quibbles and questions about the story (For example: What was happening in the Southern Hemisphere while the vampires were taking over the North?) didn’t surface until well after I finished reading.

In this context, I almost hesitate to raise the subject of literary depth. I don’t want to scare anyone from a story crafted to keep you compulsively turning pages until the wee hours. But like all satisfying adventures, The Greyfriar addresses bigger issues than simply getting its main characters from one end of the book to the other. This is a tale of imperialism, “manifest destiny”, global conflict and power plays seen from both vampire and human eyes. What happens when to your humanity when you’re no longer at the top of the food chain? What happens when you’ve clawed your way to the top and there’s nowhere to go but down?

In addition, the Griffiths understand that politics is always personal and show how that truth plays out in every aspect of their characters’ lives. I can’t wait to see how it plays out over the next two books in the series.

Especially since I know it’ll be a rip-snorting read every page of the way. 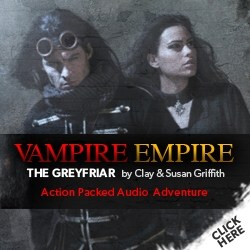 In 1870, vampires took over the northern regions of the world, forcing the surviving humans to flee to the southern hemisphere. Now the year is 2020 and Princess Adele, a human, is on the verge of coming to power just as a final war with the vampires is approaching.