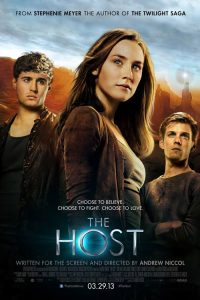 The Host is the latest offering from Stephenie Meyer of Twilight fame, set in a dystopic future where Earth has been taken over by parasitic aliens, who want to experience and perfect our world. Except for the whole “taking over all the humans” thing. Once they’ve invaded a human body, they still look exactly the same–except for glowing circles in their irises. Convenient, that. You can tell who’s who at a glance. We have met the enemy and he is us.

It does start at a strong point in the story, with lots of action, then fills in more of the background through flashbacks and memories. So far, so good.

But–the main character through most of the movie is Melanie, a human (Saorse Ronan) who’s been possessed by Wanderer, an alien. This is represented via the actress speaking out loud, then responding with voice-overs in a southern accent. For me, the device got cumbersome in a hurry, although I’m impressed with the job Ronan did–she played it straight, and kept the movie from being complete cheese.

William Hurt is also rock solid, playing a resistance leader that happens to be Melanie’s uncle and something of a genius. He also gets several of the best lines in the movie, for example “I always liked science fiction stories, never dreamed I’d be living in one.”

Otherwise, the movie is a very simple alien-gets-to-know-the-humans story, with the fun complication of Jared (Max Irons), Melanie’s boyfriend, and Ian (Jake Abel), who is interested in Wanderer. Billed as a creative love-triangle–it harkens back to Twilight, only with less believability.

There are a few tension-filled moments at the beginning of the film, mostly featuring the Seeker (Diane Kruger), one of a group of aliens looking for the remaining humans. Kruger is perfectly cast, playing someone obsessed, dressed to icy perfection with awesome shoes. Only an alien could chase someone in those shoes.

As the movie evened out, I started to pay more attention to the plot . . . .

I alternated between suppressing the urge to yell at the screen (many of the characters were written like they were in a bad horror flick–“Don’t turn around!”), and realizing that the pseudo-science made no sense at all. Nada. None.

After a thousand years, you’d think Wanderer would be more philosophical about things. I’m not, though. I just found the ending lame.

For major Twilight fans only. All others need not apply. 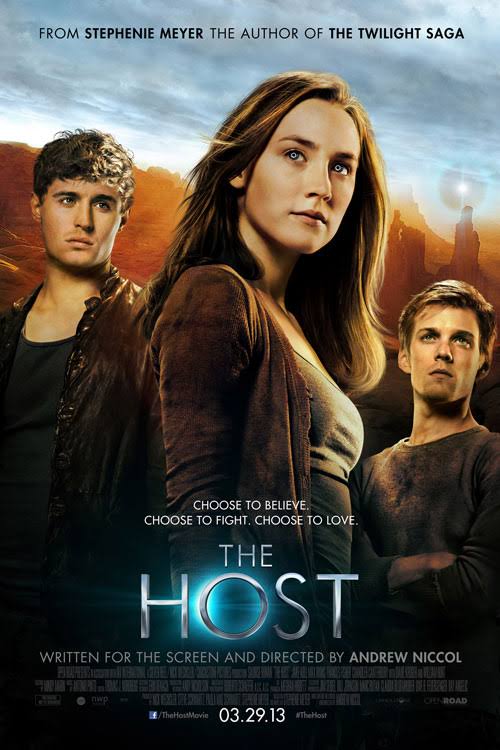 Article Name
The Host Movie Review
Description
The Host is the latest offering from Stephenie Meyer of Twilight fame, set in a dystopic future where Earth has been taken over by parasitic aliens, who want to experience and perfect our world. Except for the whole “taking over all the humans” thing.
Author
Elektra Hammond
BuzzyMag.com