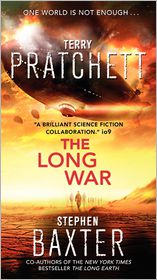 The Long War
by Terry Pratchett

When humanity learnt suddenly how to ‘step’ — travelling nominally ‘east’ or ‘west’ one world at a time across an infinite series of parallel Earths — a vast new frontier opened up, beckoning us once again to pit our finest spirit of endeavour against an equally boundless capacity for self-destruction. A decade on from the events of The Long Earth, fleets of airships now traverse the stepwise worlds, allowing for both trade and tension between the Datum Earth and her colonies. Joshua Valienté, the reluctant hero of Step Day, is married and has become mayor of Hell-Knows-Where (Earth West 1,397,426), while Lobsang — the reincarnated Tibetan monk cum supercomputer — has arranged for a similarly reincarnated Catholic nun to keep himself in check and ward off any potential tyranny of his nigh-omnipotence. Life, in short, carries on in whatever form now constitutes normal… that is until a troll mother kills a human while defending her baby, and strained relationships are brought to breaking point across the depths of the Long Earth.

If critics were merely to anticipate the end product of a collaboration between comedic wizard Terry Pratchett and science fiction luminary Stephen Baxter, their pre-emptive judgements might well match those selected for The Long War’s back cover — ‘a rollicking tale’; ‘accessible, fun and thoughtful’; ‘literary alchemy’ — whereas the reality of The Long Earth, and subsequently now The Long War, is that Pratchett and Baxter have sacrificed fun for a thoughtfulness almost beyond measure, and in doing so have produced a work that is neither rollicking nor particularly accessible. (And as for ‘literary alchemy’, is that not suggestive of a failed striving to turn base words into gold?)

Pratchett and Baxter have put forward a concept that continues to fascinate, and which in this second novel benefits from their having given more attention to how countries beyond the USA might react to Step Day. Inherent in this expanded focus, however, is the Catch-22 that simultaneously bolsters yet undermines The Long War; namely, that Pratchett’s and Baxter’s great swathes of predictive speculation necessarily lend themselves more to colouring the scenario as a whole than to focusing on the details of one or two specific stories. Nominally, The Long War purports to explore two central conflicts — the mistreatment and withdrawal of the Long Earth’s trolls; the tension between

// ]]>Datum Earth USA’s government and its rebelliously independent colonial settlements — but whereas the moral of these tales is clearly put forth, each plot thread remains itself virtually a non-event, both in establishment and resolution. The Long War is at its most engrossing when Pratchett and Baxter stick with a single story for several chapters at a time, but this is rare (as it was in The Long Earth) and for the most part The Long War comes across as being just too busy to do much more than set out a hodgepodge (admittedly fascinating) of intellectual what-ifs and thought experiments, while occasionally taking the time to pay plot’s landlady and drop in some teaser/set-ups for the next novel.

Pratchett and Baxter reportedly have signed on for three more books in the Long Earth series. One suspects, however, that their vision will only come truly into its own if they (or other authors deemed worthy) can settle down beyond its establishment and begin to write fully fledged narratives within the boundaries created. Readers who were unsure after The Long Earth can expect to remain so after The Long War. As for what comes next — ‘The Long Ranger’; ‘The Long Gestation’; ‘The Long Way Home’; put money on ‘The Long Night’ — well, the possibilities remain endless.

Humankind has spread across the new worlds opened by explorers Joshua and Lobsang a mere decade ago. Now "civilization" flourishes, and airships link the multiple Earths. A new America christening itself "Valhalla" has emerged more than a million steps from the original Datum Earth. Like the American revolutionaries of old, the Valhallans resent being controlled from afar. And in the wake of humankind's advance, the trolls—graceful, hive-mind humanoids whose song has suffused the Long Earth—are beginning to fall silent . . . and disappear.

Joshua, now married and a father, is summoned by Lobsang. It seems he alone can confront the perfect storm of crises that could plunge all of the Long Earth into war—a war unlike any that has come before.