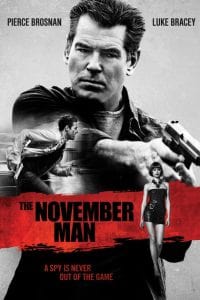 I didn’t see that coming.

The November Man is a spy vs. spy thriller where it’s a bit tougher than average to keep track of who’s playing for what team at any given moment. But it’s fun to try. The action focuses on Peter Devereaux–experienced, seemingly unemotional, gadgetless, and very good at what he does–and his younger protégé David Mason, who aspires to the same level of competence. Remember: old spies get to be that way by being very, very good.

Every time you think you have things figured out, there’s another twist. And another. This is a fast-paced movie where you never have time to reflect and think about what’s going on–you just react to what you see.

I was practically cheering.

The theater I saw The November Man at typically runs ten minutes of previews for upcoming movies. All four trailers were for R-rated movies, three of them dark, violent films. That gave me some idea of what audience they were selling this film to: Liam Neeson, Denzel Washington and Tom Hardy fans . . .

There’s no pretension here, no complicated CGI effects (well, maybe a little), no wacky chase scenes–even the whiskey is neat (no fancy martinis here). This is straight up action spy stuff, with efficient shooting, quick decisions, and clever driving. Former 007 Pierce Brosnan is right on the money as former CIA operative Devereaux, with a ruthless edge to his particular set of skills. Luke Bracey balances him well as Mason, younger, clean-cut, and trying to please his mentor in a puppy-like way.

For the action fan, The November Man has fights and shoot-outs and chase sequences. For the mystery fan, there are plots within plots within puzzles. For the science fiction fan, there’s Guardians of the Galaxy showing in the theater next door: “I am Groot!” There are lots of CIA operatives, Russian FSB, a secret assassin, an investigative reporter and, of course, politicians.

Most of the players in The November Man are background–giving the central characters motivation. Hanley (Bill Smitrovich) and Weinstein (Will Patton) are higher-ups in the CIA, Alexa (Amila Terzimehic) is a mysterious assassin, and Arkady Federov (Lazar Ristovski) is a former military man now campaigning for the Russian presidency. And ex-Bond girl, Olga Kurylenko is a classic damsel-in-distress–everybody thinks she knows the critical bit of information, making her a pivot point, and many of them are willing to kill her for it.

So the bullets and the punches fly, and the cars chase, as Devereaux and Mason play a brutal game of high-stakes cat and mouse, each trying to figure out what is going on and who’s playing for which side.

Go see it, but not if you’re looking for fluffy bunnies. Spoiler: there aren’t any.

Warning: could be triggery on issues of sexual assault. 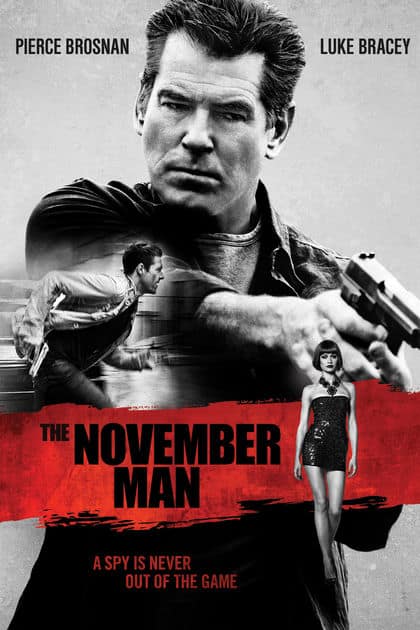 Article Name
The November Man - Movie Review
Description
The November Man is a spy vs. spy thriller where it’s a bit tougher than average to keep track of who’s playing for what team at any given moment. But it’s fun to try.
Author
Elektra Hammond
BuzzyMag.com