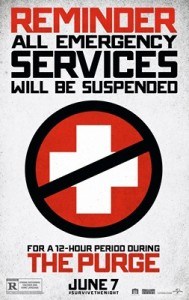 Dystopia is the new black. You can tell–primetime Saturday date night and everyone was out to see The Purge, the latest R-rated thriller starring Gattaca’s Ethan Hawke and Game of Throne’s Lena Headey. The theater was packed.

Hawke and Headey are James and Mary Sandin, a rich couple living in a wealthy gated community. This is a near future where the “new founding fathers” have given everyone a way to resolve their aggressive tendencies: once a year, for twelve hours, anything goes. The annual Purge.

The result is a weirdly polite society, where behavior is oddly informed by the notion that getting on someone’s bad side could have severe consequences.

Writer/director James DeMonaco really did a good job creating this reality that’s only slightly off from ours, from showing footage of Purge Feeds originating in different cities to the ritualistic greeting of “Safe Night,” it’s clear everyone has accepted that this is the answer. James Sandin is a true believer, he spouts off government propaganda supporting the Purge at the drop of a hat.

Well, almost everyone. Zoey, the Sandin’s sixteen year old daughter is sensitive enough to find the whole idea repulsive. Charlie, her precocious younger brother, has focused instead on technology, interacting with his family using a remote control toy they call “Timmy.”

The movie begins shortly before the siren signalling the start of the annual Purge, and ends just after–it’s just a tiny peek at this one family. Through news reports and talk show snippets, you get a sense of the various theories of why the Purge has dropped crime, even as the Sandlins aren’t paying attention.

What is clear: the Sandins had a great year because James sold a lot of security upgrades–including to everyone in the neighborhood. The Sandins would be using that same upgrade to lockdown during the Purge and just hide in their house, waiting for it to be over.

The monkeywrench: when a wounded stranger comes running through the neighborhood, a band of rich twenty-somethings on his heels, the integrity of the Sandlin’s security is compromised. Now it becomes personal, and the family that has the means to sit out the Purge in relative safety will be tested again and again.

I won’t lie–there were things missing here. Panic rooms, for one. And this dystopia focused entirely on people’s desire to kill, and to do so with overwhelming force in weapons and numbers. Other crimes, such as theft or rape, were ignored entirely. But I liked the complete way the world was thought out, from TV coverage to rituals to overall behavior. This was a study in human behavior under adverse circumstances, and it was strangely satisfying to watch people react.

Be warned, this one is not for the faint of heart. It’s full of graphic violence, and it was make-you-jump scary in places, with a distinct lack of fancy special effects. Science fictional horror at its best–the kind that makes you think.

And that packed theater–they loved it. 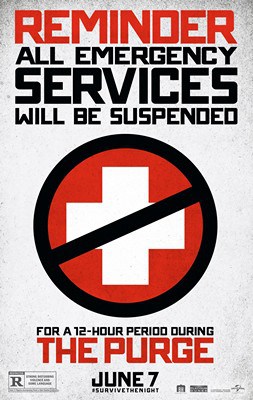 Article Name
The Purge Movie Review
Description
Dystopia is the new black. You can tell–primetime Saturday date night and everyone was out to see The Purge, the latest R-rated thriller starring Gattaca’s Ethan Hawke and Game of Throne’s Lena Headey. The theater was packed.
Author
Elektra Hammond
BuzzyMag.com