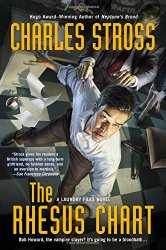 “Everyone knows vampires don’t exist…” It’s a phrase that gets used a lot in Charles Stross’ latest entry into the Laundry Files Series (The Rhesus Chart). The series follows IT ninja and part time computational demonologist/spy Bob

as he tries to navigate the bureaucratic and betentacled pitfalls of working for Her Majesties Occult Secret Service. In The Rhesus Chart Bob runs across the fact that, for an organization that deals with monsters and magic every day, The Laundry has a curious blind spot when it comes to bloodsucking fiends.

This being a Stross novel nothing is exactly as you’d expect, and the explanation he gives for vampires makes a lot of sense in universe. The vampires come not from a virus or an ancient curse but from a curious accident of math that snags a group of financial computer experts and Bob’s ex-girlfriend into being creatures of the night. A lot of time is given over to the explanation of how vampires might actually work given the structure of the Laundry universe, it works well enough that vampires go from being a somewhat passé monster of the week and become a very real threat.

Bob is still his snarky self throughout the novel, but in a lot of ways this is the least humorous novel in the series. The apocalyptic scenario that Bob has been fearing since the series began is getting closer and closer with each book, and in The Rhesus Chart that threat hangs over everything. The book feels very dark even though there’s less in the way of jaw dropping horror than in the last book (The Apocalypse Codex). Stross has clearly gone in with the intent of making every death feel significant. And there is a lot of death.

The Rhesus Chart is very much a wham episode: things change, characters perish, the world edges ever closer to being gobbled by hideous monsters from beyond space and time. I ended up reading The Rhesus Chart twice and enjoyed the book more the second time through as I picked up more in the way of detail in the writing. Stross still leans heavily on the idea of math as magic and computers as tools of sorcery but the integration feels smoother in The Rhesus Chart than it has in previous iterations of the series. I didn’t feel the need to have Google open throughout reading it to try and figure out what he was talking about. The math and computer terminology is still there for those who enjoy it, but you won’t feel lost without a degree in computer science.

Bob’s long suffering and deadly wife Mo is a major factor in the story and her side of the story is well handled. According to Stross the next Laundry novel will be from her point of view and given the way her character is handled in The Rhesus Chart that feels like a good decision. She’s tough and smart without becoming a caricature and her reactions to the horror she’s witnessed seem very real on the page.

Much as I missed having Bob crack wise as much as he has in previous novels, I think this is the best book in The Laundry Files so far. The violence feels significant rather than gratuitous, the plot brings the whole universe forward a step and the whole thing was just plain fun to read. I’ll miss Bob’s voice in the next book, but Mo’s character is so good I think she’ll fill the role of snarky lethal narrator admirably. No matter what, if The Rhesus Chart is anything to go I can’t wait to see where the series goes next.

The new manager of an organization tasked with defending England from supernatural threats must stop an outbreak of vampirism at a merchant bank.