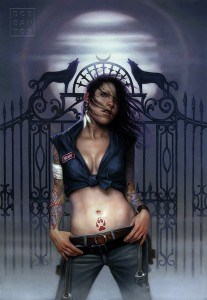 The hoopla over the Mercy Thompson

trilogy has got me thinking. No, I’m not planning to harm myself so that I can be turned into a werewolf and become an Alpha male (although judging by the cover art of the books, Mercedes is quite a catch). With all the attention in the trilogy on the role of pack relations and Mercy’s own relationships with Adam and Samuel, I had to know, how much of the sexual and emotional chemistry in the books was good ol’ deductive reasoning and how much of it was literary sizzle? Armed with this burning question, I did some sleuthing of my own. Armed with a day’s worth of gumshoe research at the local public library, and aided by my trusty sidekick Google, I came up with some titillating answers…only it’s not exactly the type of thing the mechanic herself would want to hear.
To put it simply, there isn’t enough room for her. In the real world, as in the novels, pack relations are stratified. While there isn’t any such thing as an

Alpha male or an alpha female–only a mother and father, regardless of Mercy’s special status as Adams’ ‘mate’ she would be hard pressed to survive within the pack. The reason has everything to do with who she is, or rather what she is. If everyone recalls, in her shape-shifter form Mercy is a coyote. And last I checked coyotes and wolves aren’t exactly bosom buddies.

According to biologist L. David Mech, coyotes and wolves are extremely territorial. Neither likes the other in their territory. A pack that feels threatened by a coyote will go out of its way to kill it – though documented cases of coyote massacres are infrequent, they aren’t uncommon. If Mercy moves in with Adam, the subordinates living in Adam’s flat might see her less as subordinate wife, and more as an unwelcome occupier. The worse nightmare scenario could see a civil war within the pack as Adam is challenged by hard-liners for his weakness in adopting his next door neighbor as his de facto wife.

This brings us to the question of Samuel. Spurned by his ex-lover, he is understandably hurt. He could pack up his things and leave – as wolves in the real world do – but where would he go? What would he do? He could go back to Montana, but that would mean throwing away everything he’s worked for – the MD, his colleagues at work, even the chance of reconnecting with Mercy in the future. With a weakened Adam, a politically unstable clan, and his status as sire of the Marrok, he would be poised to capture the top position in Adam’s clan (I call this the Breznev option).

Remember, Mercy ran away from the Marrok precisely because the women in the clan were aggressive towards her (maybe they saw her as competition?). A similar incident in close quarters would end only in a bloodbath, and Mercy’s survival wouldn’t exactly be assured. Plus, as an independent female, she would automatically lose her freedom of movement, freedom to criticize, and a lot more besides. Faced with an uncertain certain future both inside as well as outside the clan, the only sane option would be for her remain aloof from Adam or Samuel. But then, a deus ex machina could always intervene at the eleventh hour. Then again, maybe not.